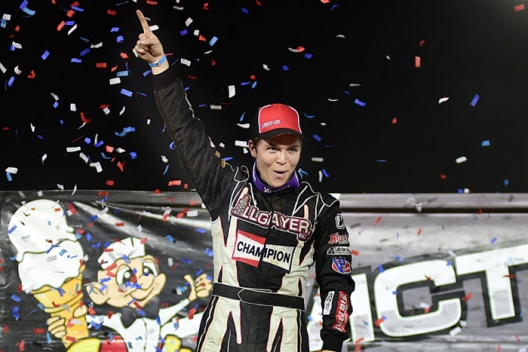 "Congrats to Jesse on winning last night and second tonight. I'm just glad we were one spot better tonight," the 19-year-old Pierce said after his 23rd feature victory of the season — including crown jewel victories in the World 100 and North-South 100.

"It's been a crazy year so far. We have a couple of races left and hopefully we can get some more wins," added Pierce, of Oakwood, Ill. He earned $5,000 for his first main event win at Lucas Oil Speedway.

A total of 155 cars checked into the pits — 63 Late Models and 92 street stocks — the oval-track racing season at Lucas Oil Speedway came to a close.

Pierce brought the big crowd to its feet when he passed Stovall coming out of turn two on the next-to-final circuit in the season's final MLRA race. Stovall slipped high, into the cushion, and lost momentum as he encountered slower traffic.

"We were riding pretty good and those lapped cars ... at the end of the day it was a good race," Stovall said. "Bobby is one of the best in the business. He's a good little driver. He has that golden horseshoe right now.

"Just two laps short. You hate to lose them like that. But I've won some like that. That's part of the game."

Stovall's disappointment at finishing second was softened by his MLRA championship. He entered the night with an all-but-insurmountable 74-point lead over reigning champ Terry Phillips after capturing Friday's Fall Nationals feature win.

"That was the ultimate goal," said Stovall, who finished just behind Phillips for the series crown a year ago.

Tim Manville of Highland, Ill., bolted from his pole starting position and opened a big lead in the early going, a straightaway margin in front of Brantlee Gotschall and Stovall. But Stovall began to gradually reel in the leader and, with Manville caught up by slower traffic, drove into the lead with an outside pass going into turn three on lap 21.

Meanwhile, Chris Simpson of Oxford, Iowa, drove from his 15th starting spot to crack the top five when the race's third caution flew on lap 22. A five-car accident in turn one brought out the fifth caution on lap 31, wiping away a 10-length lead that Stovall had built over Manville with Simpson in third.

Pierce moved into the top five and set his sights on the leaders. But Stovall still appeared to be in command until the final five laps when lapped cars dented his momentum and allowed Pierce to close in.

Simpson wound up third with Manville fourth and Garrett Alberson of Las Cruces, N.M., in fifth. Twelve of the 26 starters finished on the lead lap with Hall of Famer Billy Moyer first out of the race with lap one mechanical issues.