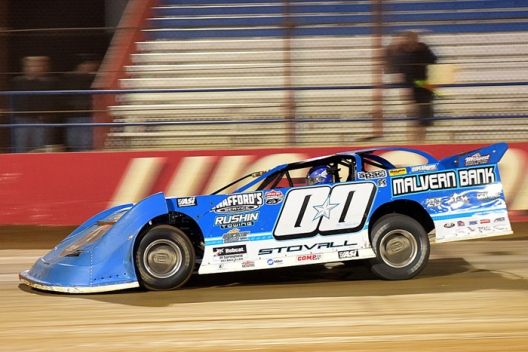 "If it is, great. We'll celebrate that at a later date," Stovall said of the points chase after collecting the $3,000 victory on a chilly evening. "We're out here to win races. That's what wins championships."

Stovall began the night 72 points ahead of reigning MLRA champ Terry Phillips. It appeared a trip to victory lane was a long shot at best with the way things were going.

Stovall struggled in his heat race and had to win one of three B-mains to earn his way into the feature, starting 19th. He then was caught up in a first-lap pileup in which 13 cars were involved with his car sitting atop a big tire that guards the infield in the middle of turn three.

"Everybody's nerves are kind of wild and crazy," Stovall said of the start of the race. He also noted that once his car checked out OK, he wanted to be smooth and work his way gradually through the field.

Sure enough, he was in the top five by lap seven and firmly in contention. Meanwhile, Arizona's Jake O'Neil took advantage when Moyer slid high into turn-two cushion and went past the veteran to grab the lead on lap 13.

But during a lap-19 caution, O'Neil pulled off the track with a mechanical issue giving the lead back to Moyer with Terry Phillips in second and Stovall third. Lurking in sixth was Pierce, the 19-year-old World 100 champ who started the feature 16th.

Things really heated up from there. Stovall took the lead from Moyer in a front-straightaway pass to complete lap 35. Moyer went back in front on lap 36 and Stovall returned the favored the next time around.

Pierce passed Moyer just before the fifth caution of the race waved on lap 38 when Stovall and the lapped car of Brantlee Gotschall got together in turn two. Stovall's momentum was not affected and, despite damage to the right-rear quarter panel, remained in front with Pierce scored in second and Moyer settling for third.

Stovall bolted away on the restart and held with Pierce finishing second, Moyer third, Brian Shirley fourth and Phillips fifth.

In victory lane, Stovall said apologized to Gotschall saying that he was just racing hard.

"Bobby and Billy were right there. You have to go, go, go," Stovall said.

As for Saturday, with the MLRA championship apparently in hand, Stovall said: "Hopefully we can kind of calm down a little bit and we can just go out and race."

Pierce, from Oakwood, Ill., came up just shy of his 23rd feature win of a breakout season.

"This was a lot of fun," Pierce said. "The track was very raceable at the top. I like coming here. I'm glad with the run we had starting back. Maybe tomorrow we'll be even better."

The 59-year-old Moyer, meanwhile, hedged on whether this weekend is his last visit to Lucas Oil Speedway. Moyer, of Batesville, Ark., has called himself semi-retired this year and has not committed to racing again in 2017.

"We'll see," Moyer said. He won the first half of the MLRA Spring Nationals at the speedway back in April for one of 10 wins this season and 815 in his career.

Notes: The event was slowed by five yellow flags. ... Stovall recorded his 20th career MLRA victory and ninth career Comp Cams triumph. ... Jake O'Neil grabbed the lead on lap 13 when Billy Moyer slid high and hopped the track's berm, but under caution on lap 20 O'Neil pulled to a stop on the track and was pushed to the pits. It was determined he had a mud clod pass thorugh his radiator, causing his engine to run hot. ... Brian Shirley was fourth in his first start since suffering a concussion in a Sept. 4 World of Outlaws Craftsman Late Model Series accident at Lernerville Speedway in Sarver, Pa. ... Comp Cams Super Dirt Series points leader Hunter Rasdon got together with another car in hot laps, damaging his machine to the point where he had to unload his backup. He was part of the feature's 13-car pileup in the features opening lap and ultimately left the track on the hook, surrending several points to seventh-place finisher Jack Sullivan. The CCSDS championship battle will be decided in Saturday night's weekend finale.