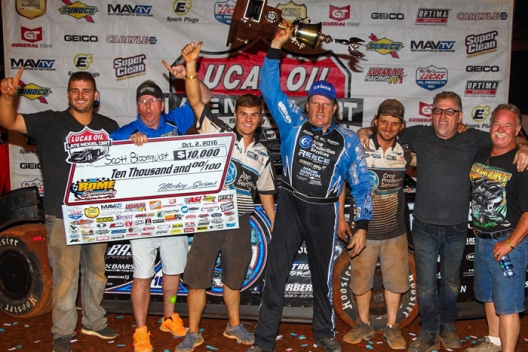 ROME, Ga. (Oct. 2) — Scott Bloomquist already had enough points to clinch the 2016 Lucas Oil Late Model Dirt Series championship before entering Sunday night’s tour event at Rome Speedway. He celebrated by roaring to his 15th victory of the season on the circuit in the evening’s 50-lap feature.

The 52-year-old Hall of Famer from Mooresburg, Tenn., controlled the Rome Showdown from start-to-finish, surging off the outside pole to grab the lead from polesitter Ray Cook of Brasstown, N.C., at the initial green flag and never looking back. He repelled a brief mid-race threat from Chris Madden of Gray Court, S.C., and a lap-38 restart challenge from Don O’Neal of Martinsville, Ind., to add another $10,000 check to his bank account.

Bloomquist pulled away from O’Neal over the race’s final circuits to beat the 2014 Lucas Oil Series champion by 1.407 seconds. World of Outlaws Craftsman Late Model Series regular Brandon Overton of Evans, Ga., finished third, Madden settled for fourth after running second for part of the race’s first half and 2015 Lucas Oil titlist Jonathan Davenport of Blairsville, Ga., rallied to place fifth after pitting to change a flat tire on his Chip Stone-owned No. 116 that caused him to bring out the event’s first caution flag on lap three.

After emerging victorious in Lucas Oil action at Rome for the third time in his career, Bloomquist offered a simple reason for his success.

“This car was awesome tonight, just smooth as can be, and our Andy Durham engine ran sweet,” said Bloomquist, whose previous series triumphs at the 3/8-mile oval came in 2009 and ’14. “That’s what it was about out here — just being really smooth.

“This tire rule’s a little bit tricky here. You really have a little too soft a tire for what the condition of the racetrack’s asking for, so you gotta manage and just really be cautious, kind of tip-toe around out there.”

Ever the perfectionist, Bloomquist felt he could have tuned his self-designed machine a bit better. Nevertheless, he had no peer in the finale of the Lucas Oil Series’s Peach State doubleheader.

“I wasn’t as good as I could be,” Bloomquist said. “You just don’t always know, and I got out there and I was a little bit too free on entrance and was just having to roll out of the gas real smooth and keep the car under me. But, all in all, obviously we were good enough.”

The checkered capped a satisfying weekend for Bloomquist, who watched Dale McDowell of Chickamauga, Ga., capture Saturday night’s Lucas Oil Series event at Dixie Speedway in Woodstock, Ga., in a Sweet-Bloomquist car and pushed his tour points lead to an insurmountable margin with two races still remaining on the 2016 schedule.

“We were glad to see Dale picked that one up last night in our car and we got this one tonight,” said Bloomquist, who will earn $75,000 in points-fund cash for his third career Lucas Oil championship but first since back-to-back crowns in 2009-10. “Our cars are really doing well.”

O’Neal, 52, remained winless on the 2016 Lucas Oil Series but was encouraged after advancing from the fifth starting spot to secure his fourth runner-up finish of the season.

“I had a good race car all night,” O’Neal said of his Clint Bowyer Racing Club 29 mount. “It really got good there in the feature. It’s probably the best race car we’ve had in the last few weeks so we’re making some gains.”

O’Neal’s problem, however, was the lap-38 caution flag for Casey Roberts of Toccoa, Ga., who slowed while running sixth, that dulled his momentum. He had taken second from Madden on a lap-27 restart after McDowell slowed on the homestretch and was beginning to roll around the outside of the track when the yellow conditions killed his strategy for a late-race bid.

“I moved up down there in (turns) one and two one time when I knew nobody was pressuring me and it didn’t feel bad at all,” O’Neal said. “I didn’t really want to see that yellow.”

The 25-year-old Overton slipped back slightly from his fourth starting spot early in the feature but found speed late, reaching third place with a pass of Madden shortly after the lap-38 restart.

“We can’t get going at the beginning, but we’ve got a fast race car at the end,” said Overton, who completed a solid weekend that also included a runner-up finish Friday night at Tri-County Race Track in Brasstown, N.C., and a fourth Saturday evening at Dixie. “That’s probably a good thing. I just wish (the race) would’ve had a couple more laps.”