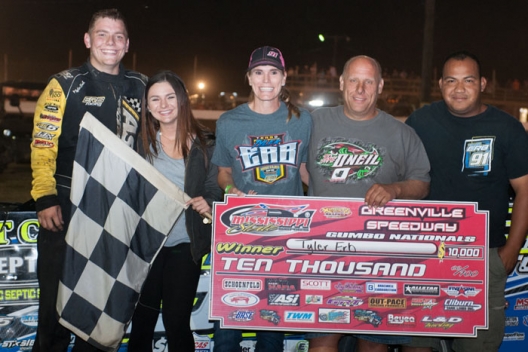 GREENVILLE, Miss. (Oct. 1) — Tyler Erb’s biggest career victory came in a thriller that went down to the final lap. The 19-year-old driver from New Waverly, Texas, rubbed past Ray Moore of Haughton, La., in turn three on the 75th lap Saturday at Greenville Speedway to claim a $10,000 victory in the Gumbo Nationals.

Erb, a regular on the World of Outlaws Craftsman Late Model Series, became the last of six different leaders in the race’s final moment as he collected his first-ever Mississippi State Championship Challenge Series victory.

A disappointed Moore settled for second after leading the last half of the race while B.J. Robinson of Shreveport, La., was third. Eric Cooley of Fulton, Miss., was the top finishing home-state driver while Dane Dacus of Arlington, Tenn., rounded out the top five.

But it all came down to a Moore-Erb showdown in the final laps after a lap-65 caution bunched the field. Erb briefly slipped ahead on a restart with 10 to go, but Moore quickly regained the lead and edged back away.

The high-running Erb continued stalking the inside-running Moore and dove low into turn three under Moore’s car on the final lap. The frontrunners rubbed with Erb’s car sliding ahead and winning the race to the checkers.

“I love this place. I don’t think you can ask for a better surface,” Erb said. “The top, it just took laps and laps and laps, and I kept getting closer and closer, and I kept hitting the wall, but I knew eventually that bottom would get slow enough. It just go too slick off there in (turn) four that I could get a really good run if I could keep it out of the fence.

“I thought (Moore) was going to keep driving away from me and driving away from me, but off of (turn) four I could get such a good run if I didn’t hit the wall too hard. That last lap, he slid up real bad and I just ran into (turn) one pretty hard, and he kind of shoved in (turn) two). I knew he was going to diamond all the way to the top, so I couldn’t drive around him. We rubbed a little bit, but he was able to finish, I was able to finish, so I’ll take it.

"Man, this feels good," he concluded.

Moore, who led comfortably before the late caution, was left to settle for second.

“I was trying to win it for (his crew and supporters), but I don’t know, it didn’t work out on the last lap and we’ll come back and try it again next year,” he said. “I was counting the laps. I knew if we had a caution somebody was going to try to give me a bump-and-run or something. But that’s just part of it when it’s dry-slick like that. It’ll be reversed one day.”

Sullivan led the first lap before Baker and Breazeale took turns out front. After a Tommy Surrett spin, Baker regained the lead and was still in control when the second caution appeared for a spinning Wendell Wallace, the race’s first retiree.

Newman came alive on the restart, working the low groove to move into second and then wrest the lead from Baker. Nearing the halfway point, Sullivan got rolling and made an outside move to take the lead from Newman with Moore chasing both from the third position.

Sullivan was still in control near halfway when he got too high in turn two and briefly slipped over the backstretch banking. Moore capitalized on the opportunity, zipping past to take the lead.

Moore had a half-track margin on the field when the final yellow appeared, a dramatic caution triggered when Josh Putnam slid in front of Sullivan in turn four. The cars of the top-five runners literally entangled before they rolled to a stop in turn two.

On the restart, Erb made his first bid for the lead and Moore answered, setting up the late-race showdown that led to the young Texan’s biggest victory.

Notes: Erb recorded his first feature win of the 2016 season. He had previously finished as high as second, scoring runner-up placings in SUPR, WoO and UMP DIRTcar Summernationals events. ... Breazeale broke an oil-pump belt in his regular No. 54 Friday and piloted Billy Franklin's No. 17 during the weekend. ... Reigning MSCCS champ Bub McCool made his first competitive appearance in a few months. ... The event drew 156 race cars overall, including 45 Super Late Models.