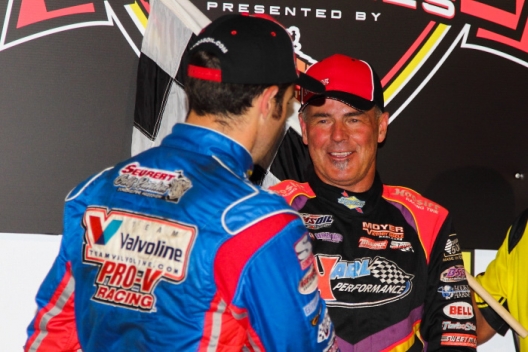 Charging to the lead at the drop of the green flag, the 58-year-old Moyer distanced himself from the field in the early running, holding as much as a half straightaway lead by lap five. As the race reached the halfway mark Sheppard, 23, began working the bottom of the racetrack and reeling in the race leader, but his charge wouldn’t be enough as Moyer went on to capture the caution-free race for his ninth career victory at the famed Iowa oval in his native state.

“It’s hard for me to see anybody here, any kind of signal, so I slowed down there a little bit and it seemed like it was pretty good,” said Moyer, who was victorious in what might be his last weekend of racing at Knoxville because he plans to retire from regular competition at the end of the season. “Sometimes you slow down and get a little bit better. A few laps, it seemed like that was the better way to go and then it’d kind of go away. This track has always been hard to drive. Lap-to-lap, it just seems like things change all the time.

“I got up there behind (Mike) Marlar with 10 to go or whatever it was,  and felt like I was wasting too much time. I wasn’t gaining right up on them. I did that inside move once getting into turn three and it drove through there pretty good. I kind of knew then I could probably do that if they entered that wide. You’ve just got to make the right decision at the right minute.”

“(Moyer) made some good moves in lapped traffic there,” Sheppard said. “The lapped cars kind of got a little aero-push and moved to the top and that’s where they were staying. So I had to do something. I knew that the line was eventually going to move to the bottom at some point Saturday night, whether it be early or late in the race. I knew I had to try it out sometime, whether I got passed it or not, it didn’t really matter. I kind of needed to try it to see how my car was.”

After finishing runner-up in last year’s Knoxville Nationals for the fourth time in his last five starts in the 100-lapper, Richards was happy to kick off the weekend with a top-three finish.

“I feel like we had a winning car,” said Richards, who accumulated the most points on the first night of the Knoxville Nationals. “We had that really long green and I was kind of rolling the middle. I wasn’t really that good on the top and I started running the middle and was actually really good. I got to (Sheppard) and got underneath of him and got my rhythm off a little bit and he got back by and we got shuffled back a little bit and then I ran him back down.

"You get your rhythm off just a little bit … it’s like (Moyer) said, this is a tough place. You can make a lot of time, or if you miss a little bit, you’re sitting there waiting."

Notes: Moyer, a former Knoxville Nationals winner, scored his 24th career Lucas Oil Series triumph and his ninth victory on the 2016 season. … While the preliminary program was not a Lucas Oil Series points race, the tour's points leader, Scott Bloomquist of Mooresburg, Tenn., was a no-show. He was listed on the qualifying order as being entered but he did not arrive in time to compete in Thursday’s program. … The car count of 69 cars was an increase of six from last year’s Thursday show. … Feature starters Tyler Erb of New Waverly, Texas, Brent Larson of Lake Elmo, Minn., and Kyle Bronson of Brandon, Fla., were among drivers making their first-ever visit to Knoxville for the Nationals. ... Last year's Thursday-night preliminary feature winner, Chad SImpson of Mount Vernon, Iowa, failed to qualify. ... Richards and Chris Simpson of Oxford, Iowa, topped the Knoxville Nationals points standings at the end of the night. With Saturday evening's top 24 feature starters and the lineups for the alphabet last-chance races being determined by each drivers' best preliminary points night, Friday's program provides entrants another chance to better their points totals.

A clod of mud apparently kicked up off the track and broke the fan blade of Ryan Gustin’s car during the second heat, forcing him to the pit area. “It cooked the motor,” said Gustin, who has a second car that he will likely pull out for Friday night’s program. … Making his first-ever Dirt Late Model start with an open-competition engine, Iowa’s Jesse Sobbing had a very impressive run going in the fourth heat. He surged off the outside pole and led the race’s first half until his powerplant — a Pro Power piece the open-wheel modified regular borrowed from Farley, Iowa’s Jason Rauen for the weekend — broke and forced him out. “Unless someone’s gonna put me in their car,” he said, “we’re done (for the weekend).” … Jared Hawkins and car owner Eric Hudkins made a last-minute decision to tow overnight from their West Virginia home to enter the Knoxville Nationals, but it was all for naught as the engine in Hawkins’s machine went up in a huge cloud of smoke during the first heat. With no backup motor available because they lost one last Thursday night at Eldora, Hawkins’s first-ever visit to Knoxville came to an apparent early end. … Dale McDowell pulled up lame running third in the sixth heat after his Team Dillon Racing car’s radiator was knocked out, likely damaging the motor in the process. … Jason Utter’s car sustained significant damage after a blown right-rear tire sent him into the turn-one wall during the fourth heat.

Weather conditions for the Knoxville Nationals opener have been gorgeous throughout the day — partly sunny skies and temperatures around 80 — but heavy rain is looming off to the northwest. Forecasts are calling for rain chances to increase steadily from 10 p.m. onward, so track and Lucas Oil Series officials said during the drivers’ meeting that they will be in “rain mode” to hurry the show along. … The 69-car field is up six from 2015’s turnout. … Hot off becoming the youngest World 100 in history last Saturday night at Eldora Speedway in Rossburg, Ohio, Bobby Pierce of Oakwood, Ill., is in the Knoxville Nationals field for the second time in his career. His only previous appearance was in 2012 when, as an upstart 15-year-old, he failed to qualify for any of the weekend’s features. … Wisconsin team owner J.R. Haley is fielding a two-car effort with Ricky Thornton Jr. of Chandler, Ariz., behind the wheel of a Club 29 Race Car and Chad Mahder of Eau Claire, Wis., driving a Rocket machine. … Ricky Weiss of Headingly, Manitoba, has Knoxville Nationals experience, but his car owner/teammate, Vic Hill of Mosheim, Tenn., is making his first-ever competitive visit to Knoxville. “I’m actually closer to home than they are for once,” said Weiss, who has spent the season working in Hill’s shop in the Volunteer State. … Mike Marlar of Winfield, Tenn., is debuting a new Capital Race Car that sports a yellow-dominated paint scheme. … Ray Guss Jr. of Milan, Ill., is making his last Knoxville start as he plans to retire at the end of the 2016 season. … WoO Sprint Car star Donny Schatz of Fargo, N.D., has a new, brightly-colored wrap on his Rocket Dirt Late Model, which the Knoxville expert will enter in Thursday night’s action. He has WoO Sprint Car events on Friday and Saturday, however, so, barring assistance from Mother Nature, he won’t be in the fields on Friday and Saturday. … Shane Clanton of Zebulon, Ga, is making his first Knoxville Nationals start since he finished 11th in the inaugural event in 2004 and his first visit to the track since a 2007 World of Outlaws Craftsman Late Model Series show. … There’s a healthy list of first-time Knoxville Nationals participants, including Hill, Mahder, Texan Tyler Erb, Floridian Kyle Bronson, Arizona’s Jake O’Neil, Iowa’s Jesse Sobbing and North Carolina drivers Nick Hoffman, Brian Ledbetter and Doug Sanders. … The tire rule for the weekend mandates the use of Hoosier LM-20, LM-40 or WRS-55 tires  on the front and LM-40 or WRS-55 tires on the rear.

Hot laps are scheduled to begin at 6:45 p.m. CT, followed by time trials and the evening's racing action.

Tonight’s racing card features a complete program with time trials and most likely six heat races, a D-Main, C-Main, B-Main and 25-lap A-Main paying $7,000 to win. Drivers accrue points based on performances each time they hit the track to set the lineups for Saturday’s final night of action.

Friday’s program is identical to Thursday’s. Drivers will use their best points night — not combined points — to see where they stand for Saturday’s alphabet soup of features, which are topped by the 100-lap A-Man paying $40,000 to win. Twenty-four drivers will be locked directly into Saturday night’s headliner at the conclusion of Friday’s action, with the remainder positioned in Saturday’s D- (if necessary), C- and B-Mains.