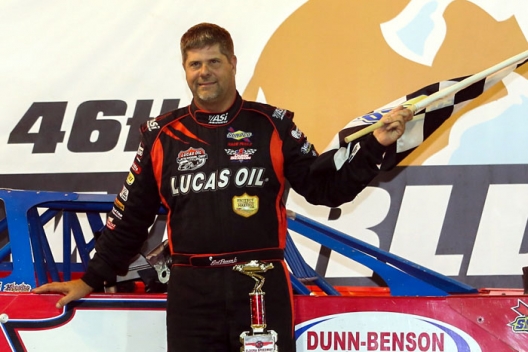 After starting ninth, Pearson worked his way up to third with seven laps remaining, moved up to second after fellow Floridian Kyle Bronson hit the wall for the umpteenth time, then took advantage of an inside-lane starting spot when the white flag was replaced with a caution flag with Clanton out front.

“I’m very surprised Clanton took the top on that restart, because of that moisture down the front straightaway,” said Pearson, whose previous victory came in Lucas Oil Late Model Dirt Series action May 15, 2015 in Oshkosh, Wis. “But it definitely worked out for me. My car was pretty good right through the middle. We made a couple changes right there. We’ve been getting better and better these last couple weeks. Ten years ago, we were standing right here on this stage, so maybe we can do that again tomorrow night.”

Clanton, another former World 100 winner from Zebulon, Ga., finished 0.729 seconds behind Pearson at the finish while eighth-starting Darrell Lanigan of Union, Ky., was third ahead of 17th-starting Dennis Erb Jr. of Carpentersville, Ill., and Steve Francis of Bowling Green, Ky.

The race's wall-banging drivers fell from contention. Third-starting Jonathan Davenport of Blairsville, Ga., last season’s World 100 winner, led the first 15 laps but faded after banging the concrete wall at the top of the backstretch. And Bronson led laps 16-21 while pushing his car to the limit, frequently scraping, slapping and sparking the concrete before falling from the lead and dropped out on lap 24.

Pearson was glad things fell his way for his first Eldora victory since July 25, 2008, on the World of Outlaws Craftsman Late Model Series.

“Davenport checked out, but I guess he knocked the deck out,” Pearson said. “And (Bronson) he was running really good there. I don’t like to run that top much. Our car was good and neutral right there. These are the tires that we’ve got to run tomorrow night, so all in all, good tonight.”

Clanton officially led three laps, but he was disappointed in the race’s extension when a yellow flag appeared as the pole-starting Bronson rolled to stop after knocking the driveshaft out of his car.

“I don’t know why we throw a caution when half the field takes the white flag. It’s pretty obvious we should have won the race,” Clanton said. "We spun the tires on the start and Earl got a good run there. It was over from there.

“Our car’s been good all weekend, so hopefully we can just make the right adjustments. We know what tire we’re going to be on, so we’ll be on equal playing field.”

Lanigan was among a flurry of drivers in the mix as he bounced back from Thursday’s sub-par performance.

“We had a pretty good car there in the feature. We were glad to rebound a little bit from our struggles last night. Like I said, we’ve got a pretty good piece,” Lanigan said. “I knew I wanted that outside on that restart and I got shuffled to the bottom there. I think if we could have got out there sooner I might have had something for them.”

The quick-starting Davenport dove under the front-row starters Bronson and Tyler Erb in turn one at the outset and dominated the first five laps before Bronson reeled him in. Bronson made a few challenges, but Davenport edged away to get a cushion of two lapped cars before halfway. But Davenport crunched the right-rear corner of his corner when he hit the wall on lap 15, and Bronson took advantage to go ahead a lap later.

Bronson stayed in control but proceeded to hit the wall in virtually every corner of the track over a five-lap stretch, allowing Clanton, Pearson, Lanigan and other pursuers to catch him.

Clanton edged ahead on lap 22 to lead Bronson and Pearson, and Pearson was up to second when Bronson’s demise set up the two-lap dash to the checkers.

There was no smile on Chris Ferguson’s face after he won the first heat. “I don’t know if the fans saw it, but that was not a pretty heat race,” he said. “The car was driving pretty terrible, but if we can win a heat race with a terrible car, maybe we’ll be OK in the feature.” … Earl Pearson Jr.’s victory in the second heat gave him a prelim triumph for the second straight night, but he wasn’t bursting with confidence. “We’ve got some work to do on our feature setup,” he said. “We were a little bit too loose.” … What a difference a day made for Darrell Lanigan, who rebounded from a blown head gasket that forced him to scratch from Thursday’s action with a 3.163-second victory over Jonathan Davenport in the third heat. “We’re a little bit top-dominant,” he said. “We gotta get better on the bottom.” … Steve Francis came alive in the fourth heat, steering his Chad Stapleton-owned Tony Stewart tribute car to a victory one day after struggling immensely. “We were just absolutely horrible last night,” said Francis, who credited his crew’s engine change on Friday afternoon for turning around his fortunes. … Shane Clanton didn’t apologize for winning the fifth heat. “I’m here to win everything we can,” he said. “I know we’re gonna get inverted back (with the win), but we’ve got a good car and hopefully we can keep passing cars.” … Devin Friese’s World 100 weekend appeared to come to an end with a terminal engine malfunction on lap nine of the third heat. His crew chief, Mike Price, said the team’s new powerplant broke in catastrophic fashion. … Ricky Weiss limped across the finish line in the fourth heat with a broken rear end, but he finished fourth and is working to swap rears for the feature.

Side-by-side coming out of turn four, Shane Clanton pulled ahead of Kyle Bronson to lead the first lap. Clanton began stretching his lead, as Austin Smith and Josh Rice battled for the fourth and final transfer spot. Clanton won the fifth heat race, with Bronson holding off Shannon Babb to finish second. Babb finished third, with Smith pulling away from Rice to take transfer to the feature.

Third-starting Ricky Weiss edged ahead of polesitter Nick Hoffman at the line to take the lead at the drop of the green flag. Advancing from the fifth starting spot, Tyer Erb pulled ahead the race leader on lap five, with fourth-starting Steve Francis in tow. Working around the top of the racetrack, Francis shot past Erb to take the lead at the white flag. Francis won the fourth heat, with Erb running second. Hoffman finished fourth, with Weiss slipping to grab the fourth and final transfer spot.

Charging around the top of the racetrack, outside polesitter Darrell Lanigan pulled ahead of polesitter Jonathan Davenport to lead the opening lap. As the top-two distanced themselves from the field, a battle ensued between Steve Casebolt and Joey Moriarty for the final transfer spot. Dominating past the halfway point, Lanigan picked up the heat race win, with Davenport finishing runner-up. Chris Madden finished third, with Casebolt pulling away from Moriarty to run fourth and transfer to the feature.

With the frontrunners going three-wide as they exited turn four, outside polesitter Earl Pearson Jr. pulled ahead to take the race lead. Working around the low-side, Casey Roberts kept Pearson in his sights, crossing the line nearly side-by-side at the halfway mark. But Roberts’s charge was short-lived as Dennis Erb Jr. pulled ahead to grab the second spot with just two laps remaining. Pearson held off Erb to win the heat race, with Jeep Van Wormer running third. R.J. Conley edged ahead of Roberts to cross the line fourth. Erb was penalized for jumping the start, putting him back two positions at the finish.

Shooting to the high-side, polesitter Chris Ferguson took an early lead, as Nick Latham improved from the sixth starting spot to the third position. Ferguson led all 10 laps unchallenged, with fellow front row starter Dustin Linville holding off Latham to finish second. Latham ran third, with Kent Robinson fighting off a slide job challenge from Hudson O’Neal to finish fourth and transfer to the feature.

Hudson O’Neal was almost speechless after timing second-fastest in qualifying in what was his third career Super Late Model start. “Oh, man, it’s crazy,” the 16-year-old said while standing on the stage. He admitted that he would have liked to set set fast time, but his dear old dad, Don, overtook him in the final moments of time trials to take top honors. “I’m glad dad beat me,” he said. “I wouldn’t want anybody else but him to beat me. It’s a little heartbreaking, but I’m exceeding so many of my expectations.” … Doug Drown and his crew were hard at work repairing virtually the entire right side of his car after he slammed the outside hard during qualifying. … Dennis Erb Jr., who finished third in a preliminary feature on Thursday, managed only the 64th-fastest qualifying lap. … Word began circulating through the pit area that Brandon Sheppard, who is not competing in the World 100 activities because he’s suspended (along with four other drivers) from WoO and UMP DIRTcar competition until Sunday due to his failed tire-test after June’s Dream, has taken himself out of the lawsuit that the penalized drivers recently filed against the World Racing Group and Eldora Speedway in protest of the Dream infractions.

The 52-year-old O’Neal tripped the clock at 15.727 seconds to knock his 16-year-old son Hudson O’Neal off the top spot he held most of the qualifying session.

The younger O’Neal posted a 15.779-second lap with Josh Richards of Shinnston, W.Va., at 15.852 seconds as only three drivers cracked the 16-second mark in dry-slick conditions.

All three will be among drivers starting outside the second row in heat races after a four-car inversion as the field will be split into odd-even groups for two complete racing programs.

World 100 attendees took notice Thursday of the new black-colored catch fence that was installed around the outside and inside of the speedway since the Dream. A longer stretch of chain-link fence was also installed along the inside of turn four to create a lane for cars to file through the scales. … Also new are the pair of orange cones stuck in the catch fence on the outside of turn four to mark off the restart box in which the leader must step on the gas when the green flag flies. … Following Thursday night’s action teams reported no problems with the new World 100 tire rule, which bans bans all grooving, siping, pinning or needling of tires and requires teams to use Hoosier LM-20s on three corners with the option of an LM-20 or LM-40 on the right-rear wheel. The softer LM-20s were the overwhelming tire of choice for the right-rear on Thursday night and by all accounts tire wear was almost non-existent. … The only driver who opted to try a harder LM-40 tire on the right-rear in one of Thursday night’s features was teenager Josh Rice of Verona, Ky., who quickly realized that the decision was a mistake. He spun in turn four on the first lap and was involved in a tangle with Joey Coulter of Charlotte, N.C., on the second circuit. … Steve Francis of Bowling Green, Ky., will head out for Friday night’s action following an afternoon engine change in his Chad Stapleton-owned machine.

Each of more than 100 entrants get two time trial laps before odd-even heat races, consolation races and 25-lap main events.

Weather forecasts are somewhat more promising for the weekend racing schedule after a delay of more than three hours in Thursday’s programs pushed feature action past 2 a.m. … Eldora rookie Michael Norris of Sarver, Pa., was Thursday’s fastest qualifier. … Paul Stubber of Bunbury, Australia, had mechanical problems Thursday that forced him to scratch for the weekend.