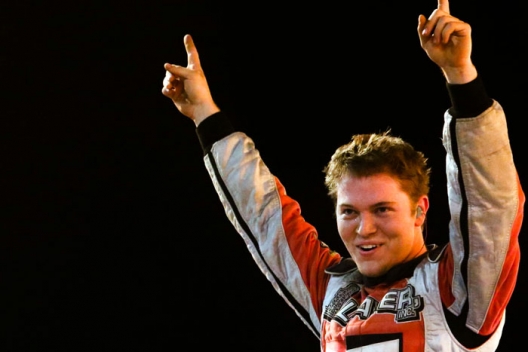 ROSSBURG, Ohio — Driving his Joker-themed No. 32, Bobby Pierce of Oakwood, Ill., got the last laugh Friday evening at Eldora Speedway.

Winning a wild four-car duel in the final laps, Pierce went from fourth to first between laps 19-21, diving under Devin Moran to take command in turn one and pull away for a $10,000 victory in a preliminary feature during the 46th annual World 100 weekend.

Pierce, whose broken fan blade in a Thursday heat race gave him a bad start to the weekend, enjoyed a much better result Friday in outdueling Moran, Jimmy Mars and Don O’Neal in a dramatic late-race showdown.

Pierce had to rally from outside the fifth row, but he was in perfect position to come out on top in the race’s waning moments.

“I didn’t know about the invert (that required him to start 10th) until after the heat race,” Pierce said. “I was like ‘Man, that sucks. But after last night, we need all the points we can get for tomorrow.’

“I’ve just got to give a big hand to my crew and my dad and everyone that works on the car. I think they kind of won the race for me with the choices they made for the feature. Me and Devin racing for the lead like that is always fun. We had an amazing race for the lead with all four of those cars out there.”

“After tonight, I feel a lot better than we did yesterday,” Pierce said. “Hopefully we can be in victory lane again tomorrow.”

Moran, who started alongside Pierce on the fifth row, led only the 20th lap after Jimmy Mars of Menomonie, Wis., got into the turn-four wall after leading laps 2-19. His time out front was brief as Pierce carried more momentum into turn one and quickly dropped Moran back to second.

“When no one else can get up there on the wall, (Pierce) gets up there and gets it done, so congrats to him, Moran said. “But man, can I not just get my first win here?!

Moran was glad to get in the mix despite starting mid-pack.

“I just got going and got up through there,” he said. “Great racing with Jimmy and Don and Bobby. Just clean racing … it was a lot of fun.”

Mars ran a softer right-rear tire than his fellow competitors, and it was starting to fade late in the race, he said.

“We had a little bit too soft of a right-rear on, but we didn’t know what to expect here,” Mars said. “Starting on the outside poll, I didn’t want to be the one gambling on that.

“Congrats to both Bobby and Devin there. They both did a great job. I was just thinking about it, both them together, I’m still older than them. It’s a new generation coming up and it’s pretty cool.”

The lone caution appeared on the ninth lap when Scott James pulled up lame at the end of the backstretch.

Notes: Fourth-finishing Don O’Neal dove low in lap 20 in turn one in a bid for the lead, but he ended up slipping back to fourth and allowing Pierce to grab third. … Twenty of 24 starters finished on the lead lap and all but Scott James were running at the finish. … Polesitter Jon Henry of Ada, Ohio, led the first lap and stayed in the top five the first half of the race before fading to finish 11th.

After winning the first heat with a dramatic final-lap pass of Tyler Carpenter rounding turns three and four, Bobby Pierce crossed the scales and quickly headed back to his trailer because his car’s engine was overheating. … Devin Moran was glad to capture the second heat, but he felt his car still needed some work — and he wasn’t sure if runner-up Josh Richards had showed all his speed. “I don’t think that the 1 car was showing everything he had because we have an invert (for the feature),” he said. … Duane Chamberlain had to pull out of June’s Dream action due to neck problems; after winning the third heat, he was feeling much better. “You just gotta be smooth and keep it straight up on the cushion right now,” he said. … Billy Moyer’s crew quickly moved to pour water in his car’s overheating engine after he crossed the scales following his win in the fourth heat. … Brian Ruhlman logged the 98th-fastest lap in time trials, but he rebounded well by coming from seventh to win the fifth heat. “We can’t qualify to save our life,” he said, “but we can race around this place.”

In a battle of former Eldora track champions, seventh-starting Brian Ruhlman used the low grooe to take the lead from outside front-row starter Jon Henry on the eighth lap and edged away for a victory. Eldora rookie Michael Page charged from eighth to finish third, slipping under polesitter Scott James late. James ended up fourth.

After a brief ran shower, the 10-lapper got rolling with Jimmy Mars roaring into the lead from outside the front row, but Billy Moyer slid ahead on the eighth lap to grab the lead and the victory. Tail-starting Curtis Roberts rallying to finish third after engine woes prevented him from time-trialing. Ninth-starting Vic Hill edged polesitter Garrett Alberson for the final transfer spot while Chris Simpson, who ran third most of the way, faded to finish sixth.

Outside front-row starter Duane Chamberlain edged away from a side-by-side duel with fellow front-row starter Dale McDowell for a 10-lap victory. Chamberlain ran the high side all the way and McDowell joined him up there briefly at halfway, but failed to track him down. Sixth-starting Zack Dohm charged in the low groove to a solid third-place finish with Wendell Wallace getting the final transfer spot after a spotty start in the caution-free heat.

Driving his a car with his father's throwback Big Johnson theme, third-starting Devin Moran stormed to the front and grabbed a 10-lap victory over Josh Richards. Cody Mahoney and Billy Moyer Jr. — taking a spot from seventh-starting Alex Ferree with two laps remaining — got the other two transfer spots in the caution-free prelim. Polesitter Dylan Ames got a poor start and faded to finish eighth.

Bobby Pierce's second slide job on Tyler Carpenter stuck as he took the lead for good in the final corner for a 10-lap victory over the polesitter. Carpenter had several brushes with the wall — including two on the backstretch that allowed Pierce to dive past in turn three — and settled for second after leading all but the last lap. Overall fast qualifier Don O'Neal was third with Rob Toland rallying from ninth for the final transfer spot.

Don O’Neal just wouldn’t let his upstart son, Hudson, earn the evening’s qualifying glory. After his 16-year-old boy sat atop the speed chart from virtually the start of time trials, the elder O’Neal roared around the half-mile late in the session to steal fast-time honors. The O’Neals did share the post-qualifying stage, however, with Hudson hanging on to time second-fastest. “For his third night in a Super Late Model, and to do what he’s doing, I’m very proud of him,” Don said of his son. … Michigan’s Curtis Roberts was the lone entered driver who didn’t log a qualifying lap. He was credited with 107th in the rundown after falling just short of repairing a broken engine push-rod in time to make his spot at the end of time trials. … Mike Mataragas, who finished fifth in a Thursday-night feature, has an uphill battle after struggling to the 95th-fastest qualifying lap. … Jared Hawkins had right-side body and suspension damage to repair after slapping the turn-one wall in his Eric Hudkins-owned car. He timed 73rd-fastest. … Word began circulating through the pit area that Brandon Sheppard, who is not competing in the World 100 activities because he’s suspended (along with four other drivers) from WoO and UMP DIRTcar competition until Sunday due to his failed tire-test after June’s Dream, has taken himself out of the lawsuit that the penalized drivers recently filed against the World Racing Group and Eldora Speedway in protest of the Dream infractions.

The 52-year-old O’Neal tripped the clock at 15.727 seconds to knock his 16-year-old son Hudson O’Neal off the top spot he held most of the qualifying session.

The younger O’Neal posted a 15.779-second lap with Josh Richards of Shinnston, W.Va., at 15.852 seconds as only three drivers cracked the 16-second mark in dry-slick conditions.

All three will be among drivers starting outside the second row in heat races after a four-car inversion as the field will be split into odd-even groups for two complete racing programs.

World 100 attendees took notice Thursday of the new black-colored catch fence that was installed around the outside and inside of the speedway since the Dream. A longer stretch of chain-link fence was also installed along the inside of turn four to create a lane for cars to file through the scales. … Also new are the pair of orange cones stuck in the catch fence on the outside of turn four to mark off the restart box in which the leader must step on the gas when the green flag flies. … Following Thursday night’s action teams reported no problems with the new World 100 tire rule, which bans bans all grooving, siping, pinning or needling of tires and requires teams to use Hoosier LM-20s on three corners with the option of an LM-20 or LM-40 on the right-rear wheel. The softer LM-20s were the overwhelming tire of choice for the right-rear on Thursday night and by all accounts tire wear was almost non-existent. … The only driver who opted to try a harder LM-40 tire on the right-rear in one of Thursday night’s features was teenager Josh Rice of Verona, Ky., who quickly realized that the decision was a mistake. He spun in turn four on the first lap and was involved in a tangle with Joey Coulter of Charlotte, N.C., on the second circuit. … Steve Francis of Bowling Green, Ky., will head out for Friday night’s action following an afternoon engine change in his Chad Stapleton-owned machine.

Each of more than 100 entrants get two time trial laps before odd-even heat races, consolation races and 25-lap main events.

Weather forecasts are somewhat more promising for the weekend racing schedule after a delay of more than three hours in Thursday’s programs pushed feature action past 2 a.m. … Eldora rookie Michael Norris of Sarver, Pa., was Thursday’s fastest qualifier. … Paul Stubber of Bunbury, Australia, had mechanical problems Thursday that forced him to scratch for the weekend.