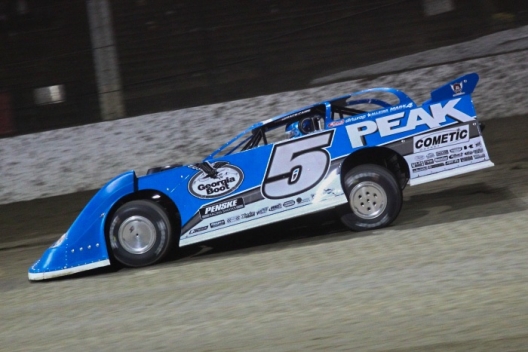 ROSSBURG, Ohio — Don’t get Don O’Neal wrong, he was glad in the wee hours of Friday morning to end a winless streak that stretched back to January. But the 52-year-old driver from Martinsville, Ind., hopes that his flag-to-flag, 25-lap preliminary victory worth $10,000 at Eldora Speedway wasn’t his last of the 46th annual World 100 weekend.

“Saturday night’s the night we want to be up here,” O’Neal said after running virtually uncontested, holding a three-second margin or more much of the race. “It’s a good start. We came back with the same car that we run here (at June’s $100,000-to-win Dream). The guys worked hard and hopefully we can win this damn race for a change.”

O’Neal built a cushion of three lapped cars after 10 laps, survived a scrape in lapped traffic on lap 19, then stayed out front of 14th-starting Jonathan Davenport’s stirring charge to a runner-up finish that held 1.714 seconds short in the caution-free affair.

Davenport, of Blairsville, Ga., was running seventh with eight laps remaining and reached the second spot by lap 20 to get a runner-up finish while 10th-starting Josh Richards of Shinnston, W.Va., was third. Chris Madden of Gray Court, S.C., and a surprising Mike Mataragas of DeKalb, Ill. — who held the second spot more than half the race — rounded out the top five at the historic half-mile oval.

O’Neal easily handled the new rules of using ungrooved tires, saying it only affected him early in the feature.

“In traffic it was a little slimy and wide open around there … maybe couldn’t steer quite as good, but other than that, I really didn’t see anything wrong with it whatsoever,” O’Neal said. “We got into a lapped car (Michael Page) on the back straightaway and went out high and come down low and go in the side of us, but that was really the only close call. But the car drove excellent, so hopefully we can just keep digging at it.”

Davenport wasn’t a factor until going from fourth-to-second on the 20th lap — he dispatched of Mataragas and Richards nearly in one fell swoop — as he stormed from the seventh row.

“I had no idea where I was at there. I didn’t have a clue I got to second,” Davenport said. “I knew Josh started just a couple in front of me, but he got going pretty early and I was trying to run the bottom.

“But I’ve just got to thank (crew chief) Kevin Rumley for getting this thing turned back around. Lee Roy (Rumley) just built us a new motor and the thing ran flawless tonight.”

Richards was overshadowed by Davenport, but improved seven positions for a solid run in a race that ended about 2:45 a.m.

“We’ll take it. We had a really good car there,” the Rocket Chassis house car driver said. “We kind of got in the middle and the car got going and I heard someone in the gas and of course it was Jonathan.

“He was giving it all he had up there. Our car was pretty good. We just kind of left it alone all night to see what we had, so I feel like we’ve got a pretty good piece and we’ll try again tomorrow."

Action continues Friday with a program identical to Thursday’s with all qualifiers split into odd-even groups running heats, consies and 25-lap features worth $10,000 to the winner.

Josh Richards burst forward from the fourth starting spot to quickly take the lead en route to winning the first prelim. “Some of those guys pushed and I took advantage,” said Richards. His only real problem? “My Raceceiver came out of my ear and I about went deaf (from the engine noise),” he said. … Darrell Lanigan was an early retiree from the first heat due to a blown head gasket. He scratched from the remainder of the evening’s action. … Billy Moyer Jr.’s victory in the third heat showed he’s much improved from his frustrating results in June’s Dream, when he finished 10th in the first preliminary feature but didn’t qualify for the second prelim nor the 100-lap headliner. … Doug Drown and his crew made the right adjustments for the fourth prelim, which he won in convincing fashion. “We’ve been a little too tight all night long,” he said. “We freed it up a little bit and it was good.” … Chris Madden felt good after romping to the checkered flag in the fifth heat. “We got lucky and hit the invert right,” he said. “We missed it in qualifying but I think we got it pretty close now.”

Charging around the top side to take the lead at the drop of the green flag, Chris Madden distanced himself from the field in the early running. With Mike Mataragas holding on to the second position, a three-car battle ensued for the third-place spot. Madden went on to pick up the heat race win, with Mataragas running second. Joey Moriarty ran third, with Dale McDowell improving one spot to finish fourth and transfer to the feature.

Outside polesitter Doug Drown led the opening lap, with fourth-starting Don O’Neal sliding past Rob Toland to take the second-place spot. The top-two cars distanced themselves from the field, with third-starting Jonathan Davenport closing in on the race leaders as the laps clicked off. Drown won the fourth heat, with O’Neal finishing runner-up. Davenport finished third, with Toland slipping to grab the fourth and final transfer spot.

After two complete restarts, outside polesitter Billy Moyer Jr. used the high side to take an early lead. Edging ahead of polesitter Bob Gardner, third-starting Jimmy Mars set his sights on the race leader, reeling him in as the race reached the halfway mark. Moyer Jr. held off Mars to win the heat race, with Mars running second. Casey Roberts improved two spots to run third, with Chris Ferguson finishing fourth to transfer to the feature.

Edging ahead of fellow front row starter Tim McCreadie, Earl Pearson Jr. led the first lap, with Tyler Carpenter spinning in turn four to draw a caution. Using the restart to his advantage, Pearson distanced himself from the field, as McCreadie and Frank Heckenast Jr. battled for the runner-up spot. Pearson grabbed the heat race win, with Heckenast outdueling McCreadie for second. McCreadie ran third, with Duane Chamberlain taking the fourth and final transfer spot.

With the front row starters Devin Moran and Josh Putnam colliding on the opening lap, fourth-starting Josh Richards used the bottom of the racetrack to take an early lead. Moran slowed on the backstretch to draw a caution on the second lap. Richards pulled away to pick up the heat race win, with Vic Hill improving from the fifth starting spot to finish runner up. Michael Page finished third, with Putnam slipping to finish fourth and transfer to the feature.

In his first visit to Eldora, Michael Norris of Sarver, Pa., topped 108 entrants in time trials on the opening night of the 46th annual World weekend. Norris posted a lap of 15.306 seconds around the half-mile oval.

Each group will run five alternating heat races apiece with four drivers transferring from each. Two consolations for each program will send two more drivers apiece to the 24-car starting fields.

Time trial notes: Nick Hoffman lost a 15.837-second lap because his deck height was 4 inches too high … Three-time Southern All Star champion Riley Hickman slowed on his second qualifying lap. … Mike Spatola dropped a driveshaft on his first qualifying lap and didn’t get a time.

Steady but light rain that hit after the 5 p.m. drivers' meeting delayed the scheduled 6 p.m. hot laps at Eldora. Skies to the west started to clear by about 6:10 p.m., but after a brief break, sprinkles continued as the 7 o'clock hour approached. Pack trucks hit the track shortly after 7 p.m. and were still rolling the track past 9 p.m., when the track asked drivers to preparing to hot lap.

After running the full UMP DIRTcar Summernationals for the first time this year, Bob Gardner of East Peoria, Ill., is making his first-ever start at Eldora. “I’ve only been here to watch once,” said Gardner, who has added a Pink Panther character to his traditionally pink-colored car for the weekend. “The year (Jimmy) Owens won the World (in 2011) me and my brother brought Tim Lance’s car here.” … Jared Hawkins of Fairmont, W.Va., will bid to make his first feature appearance in an Eldora crown jewel event driving for fellow Mountaineer State resident Eric Hudkins, who has had Hawkins in his Bloomquist Race Car since mid-August. Hawkins failed to qualify for the World 100 in his previous two attempts, in 2007 running for Tracey Seymour and ’11 in Bobby Lake’s car. … Devin Moran of Dresden, Ohio, is proudly sporting a throwback wrap duplicating the Big Johnson-sponsored car that his father Donnie drove in the late ‘90s. “I tried to find his old Big Johnson firesuit but I couldn’t find it,” Devin said. … After entering last year’s World 100 driving for the late Bucky Johnson, Alex Ferree of Saxonburg, Pa., is back to try again but this time with the familiar No. 10 machine he races weekly at Lernerville Speedway in Sarver, Pa. “The last month has been rough — we’ve hurt three motors,” Ferree said. “But we said if we got through the Working Man (WoO-sanctioned event last Saturday night) at Lernerville we’d think about coming out here and we finished 10th, so here we are.” … With Jared Landers of Batesville, Ark., sidelined for the World 100 while continuing his recovery from a torn carotid artery, his crew chief, Jason Durham, is at Eldora assisting Landers’s younger brother, Gavin, who is making his first attempt to qualify for the World 100. … Bryan Liverman, whose stint working as a crewman for the K&L Rumley team and driver Jonathan Davenport ended earlier this season, is lending a hand this weekend to Chris Simpson of Oxford, Iowa.

Former World 100 winner Steve Francis of Bowling Green, Ky., has an attention-grabbing wrap on the Chad Stapleton-owned Black Diamond machine he made a last-minute deal to run in the World 100. Sean Anderson of Orange Fatkat Media designed a scheme that honors Eldora owner Tony Stewart’s impending retirement from NASCAR racing; the quarter-panels sport the words “Thank you, Smoke!” and about 50 pictures of Stewart from throughout his career are spread across the bodywork. … Jon Henry of Ada, Ohio, also a special wrap saluting Stewart’s final year of NASCAR competition. “I just thought, this being his final year (of racing), we’d kind of send him with a thank you to him and show some respect toward him,” Henry said of his wrap produced by Wide Open Graphics. … Bobby Pierce of Oakwood, Ill., unveiled his World 100 wrap in unique fashion. At 1 p.m. the 19-year-old Pierce came out of his trailer dressed as the Joker — painted face and all — of D.C. Comics fame. His Canadian crewman, Jason Weese, appeared in a Batman costume and Pierce’s girlfriend, Maddy Supp, played the role of Harley Quinn. After a short skit in which Supp’s Quinn took down Weese’s Batman in front of Pierce’s Joker-themed car, Pierce jokingly said, “Superman, you’re next!” … Rusty Schlenk of McClure, Ohio, thought his World 100 plans were wiped out after his Lawrence Motorsports car was badly damaged in a wild series of flips he took during Sunday night’s Baltes Classic at Eldora, but he got an unexpected chance to enter his own No. 91 machine in the weekend’s action thanks to a phone call he received late Monday afternoon from Tyler Borck of Buckeye Concrete Coatings. Borck offered Schlenk the use of his ECR 438 engine and the former UMP DIRTcar national champion gladly accepted. Schlenk and his scrambled for the next three days to prepare his car, which sports a Donald Trump-themed wrap that includes a humorous Trump-related line on its spoiler: “Bump my car … there will be hell toupee.”