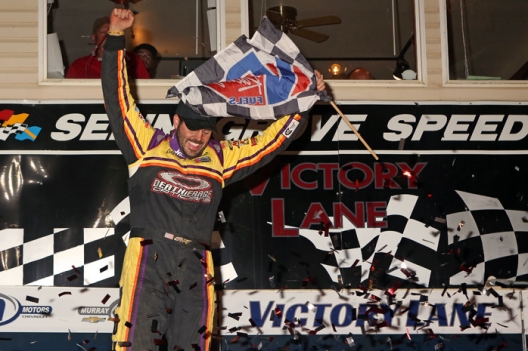 Making his first-ever start at the sprawling half-mile oval, Moyer took advantage of his pole starting slot to dominate the feature’s entire 40-lap distance. He survived a lap-39 caution flag that necessitated a green-white-checkered finish, beating Rick Eckert of York, Pa., to the checkered flag by 0.751 of a second to earn an $8,000 paycheck for his second WoO triumph of 2016 and his career.

Moyer’s success came 24 hours after he rallied from an early pit stop for a tire change to finish third in the 75-lap WoO Working Man Weekend finale at Lernerville Speedway in Sarver, Pa. — an outing that was worth over $6,000 for his bank account.

“We definitely got lucky and drew the one (starting spot), but this Billy Moyer Victory Race Car is just great,” said Moyer, who recorded his first career WoO win less than one month ago, on Aug. 13 at Winchester (Va.) Speedway. “This car, we went around there really good.”

No one was able to seriously challenge Moyer, who built a three-second advantage over the second-starting Eckert before a caution flag flew on lap eight and then drove away to an even larger edge of nearly five seconds before lapped traffic allowed Eckert to draw closer late in the race.

With passing at a premium, Moyer was careful not to force the issue in an attempt to overtake slower machines.

“I’ve lost a lot in traffic just from being a dummy, but I just told myself, ‘I’m not gonna miss that bottom. If Eckert rolls me in the middle, he passes me,’” Moyer said. “Well, we done it. They said we had a pretty good lead there until that caution (on lap 39) … we done our job.”

Moyer’s victory was a just reward for the hours he and his two-man crew (Tyler Nevins and Jason Quirin) put in not only throughout the season but on Sunday as well.

“We drove all night to get here (from Lernerville) so we could work and prepare,” Moyer said. “We’ve got such a good team. When you’re running with that blue 1 (runaway points leader Josh Richards of Shinnston, W.Va.), you’re not gonna outwork them guys … you just try to work as hard as they are.”

Moyer also moved into fifth in the WoO points standings and added to a season that will see him receives accolades as the tour’s rookie of the year. He spoke with pride after the race about claiming top rookie honors.

“We earned this one,” Moyer said of the WoO rookie points battle in ’16. “There’s some competition (for the crown). When we won the Lucas (Oil Series rookie title in 2013) there wasn’t very much (rookie competition) — it was only me, and we didn’t run very good.

“I just want to show we belong on a national tour. I’m not on Josh (Richards) and (Shane) Clanton and Eckert’s tier yet. Hopefully we can keep on and catch them, but it’s an honor to race with them guys that I’ve looked up to. Them guys show me a lot of respect and I try to do the best I can back.”

Eckert, 50, was the lone driver to get close enough to sniff Moyer’s exhaust, but even the final caution flag didn’t give the former WoO champion a real chance to steal the win in his Paul Crowl-owned Longhorn Race Car.

“We were a half a corner away and he was better than I was,” said Eckert, who lives less about an hour-and-a-half south of Selinsgrove. “But (Moyer) was going flat (with his car’s right-rear tire) I seen there under caution … he wasn’t spinning (tires during the caution) as much as I was. I was trying to keep mine aired up because once they go bald they go flat … and he was going flat.

The most dramatic moment following the final restart came on the last lap when Eric Wells of Hazard, Ky., slipped past Jim Yoder of Selinsgrove, Pa., for third place and finished there to match his best WoO performance of 2016.

“He was a little better than us,” Wells said of Yoder, who ran third with Wells behind him for virtually the entire distance. “He just slipped up a little and missed the rubber there in (turn) two and opened the door for us so we could get beside him down the backstretch. You had to be on that bottom.”

The race’s first caution flag was needed on lap eight when Danny Snyder of Greenlane, Pa., slowed with a flat tire. The other caution flag, on lap 39, flew because 13-time Selinsgrove champion Jeff Rine of Danville, Pa., fell off the pace with a flat right-rear tire while running in fifth place.

Notes: Moyer became the fourth WoO regular to record multiple wins on the tour in 2016, joining Richards, Shane Clanton of Zebulon, Ga., and Brian Shirley of Chatham, Ill., who was absent from the evening’s program because he suffered a concussion in a wild series of flips early in Saturday night’s feature at Lernerville Speedway. … Richards experienced a rare rough night. He gave up the lead in the second heat when smoke began billowing from his car with three laps remaining, forcing him to pull out a backup machine. He transferred through a B-Main but could only manage a 13th-place finish — just the second time in 37 events this season that he’s finished worse than eighth… . Richards ended the night leading the WoO standings by 270 points over Clanton. With only two features during the Oct. 27-29 World Finals at The Dirt Track at Charlotte in Concord, N.C., left on the tour schedule, Richards will clinch his record fourth career series championship by simply entering the season-ending program. … Clanton was scheduled to start third in the feature but pitted during the pace laps. He rallied from the rear to finish 12th. ... Local driver Tony Adams of Sunbury, Pa., qualified through his heat but developed engine problems that sidelined his machine. He was awarded the eighth spot in the feature lineup redraw but had to go to the rear because he took the green flag in Chris Casner's machine. ... Brandon Overton of Evans, Ga., escaped injury in a hard practice crash that knocked his machine out of action. He used a provisional to start the feature in North Carolinian Donald Bradsher's car.