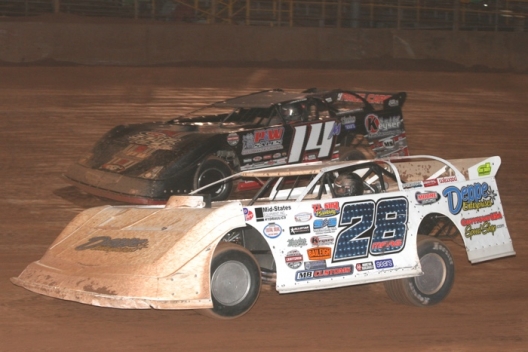 The 28-year-old Richards had led the race since lap two — along the way repelling all challenges, including several from Mars — when he scraped together with Chub Frank in turn three while attempting to lap the Bear Lake, Pa., driver on the 64th circuit. The contact popped Richards’s tire, forcing him to bring out a caution flag and putting Mars at the head of the pack.

Mars, 44, gladly accepted the free pass into the lead and paced the remainder of the distance in his MB Customs machine, turning back a brief threat from Morgan Bagley of Tyler, Texas, following a lap-66 restart to beat the WoO regular’s Black Diamond Race Car to the finish line by 1.787 seconds.

“It was too bad for Josh,” said Mars, who won Lernerville’s Firecracker 100 in 2009 and ’11. “It’s tough in lapped traffic. That stuff just happens. It sucks, but I’ve been in that position before. It’s a tough deal … but that’s racing, so we’ll take it.”

WoO rookie Billy Moyer Jr. of Batesville, Ark., finished third, rallying from a lap-24 pit stop for a tire change to claim the show position from Lernerville regular Michael Norris of Sarver, Pa., on lap 71. Rick Eckert of York, Pa., battled a tight-handling car throughout the distance but overtook Norris on the final lap to finish fourth. The 24-year-old Norris, who climbed as high as third after starting seventh, settled for fifth place.

Richards’s bid to set a new single-season WoO win record with his 18th victory of 2016 was ended by his flat, but he came back after pitting to salvage an eighth-place finish. It was the 35th top-10 finish in 36 series A-Mains for the runaway points leader.

The third-starting Mars, who reached second place on a lap-45 restart when he overtook Eckert, was trailing Richards by about one second on the fateful 64th lap. He was close enough to have a clear view of Richards’s disastrous tangle with the 54-year-old Frank.

“I seen Josh got on the inside of him (entering turn three) and Chub come down and Josh run out of real estate,” Mars said. “Josh come down the track to avoid Chub and he just hit that inside berm and that pushed him back into Chub. He was trying not to get into Chub, but when you’re running in the back of the field you’d maybe expect that you were getting lapped.”

“I don’t know how many weeks ago it was, I was leading the race damn near the whole thing and I got bottled up with lapped cars and ended up second,” said Mars, whose eighth career WoO triumph was his first on the national circuit since July 31, 2014, at Cedar Lake Speedway in New Richmond, Wis. “It was a little frustrating, so I understand their pain and what they’re going through. But it happens to a lot of people.

“Some people are just really hard to lap. I could’ve been in the same situation as Josh where I try to get my nose in there, because at that time the bottom lane was the preferred lane. If he would’ve moved out (to attempt passing Frank on the outside) that would’ve gave me the chance to get inside of him, so it just wasn’t a good deal.

Indeed, Mars didn’t coast to the checkered flag. He faced a severe test on a lap-66 restart from Bagley, who nosed inside of Mars rounding turns three and four on lap 67 but couldn’t make the move stick and then lost ground to the leader with each successive lap.

“I screwed up,” Mars said of the scare he received from Bagley. “I overshot the corner one time. I drove in too hard and had to get my bearings back straight and just get patient again. Once I did that then everything was good and I felt like I could just click my laps off.”

Bagley, 30, passed Eckert for second place on the restart following the caution flag for Richards and proceeded to make his run at Mars after another restart two circuits later. He was shooting for his elusive first-ever WoO win in his fourth season as a regular but opted to not rough up Mars in pursuit of his breakthrough.

“We had the restart there (on lap 66) and I got into one and two a little bit better (Mars),” said Bagley, whose season-high WoO finish matched his career-best performance on the tour. “I just was down there (on the inside) … but me and Jimmy, we always race clean together, and I just kind of ran out of track there so I just had to let off the gas that way we didn’t crash both of us. I knew he was the guy to beat and I was happy with second.”

The 28-year-old Moyer Jr., meanwhile, wore a big smile after landing a podium finish in a race that he didn’t begin with great hope of such a strong run. He slowed to bring out a caution flag on lap 24 because he was struggling so much to get around the 4/10-mile oval that he thought he had developed a flat tire.

“I knew I didn’t feel very good so I decided to come in,” said Moyer Jr., who started 12th. “I watch a lot of races and follow a lot of people and kind of see that stuff happen like that — when you know you aren’t very good you better just count your losses and (pit). The thing just wouldn’t go down the straightaways.

“We come in and changed a tire and changed a little thing on the car to try and make it better. When (the surface is) really fast like that sometimes early on I don’t drive very good sideways, wheel-spin, like a lot of these guys can, so I pulled in and changed tires. It helped.”

Six caution flags slowed the event. In addition to Moyer and Richards, other drivers who triggered caution conditions were Brandon Overton of Evans, Ga., who slowed on lap 32 with apparent rear suspension trouble; Dan Angelicchio of Mount Pleasant, Pa., who spun in turn four on lap 34; Jared Miley of Pittsburgh, Pa., who jumped the turn-four cushion and slammed the outside wall on lap 45 while running fifth; and Frank, who slid off the fourth turn on lap 66.

A red flag was thrown on lap four for polesitter Brian Shirley of Chatham, Ill., who flipped wildly over the berm in turns one and two. His Bob Cullen-owned car rolled several times and he came to rest upside down just off the racing surface, but he escaped no apparent injuries greater than a sore neck.

Notes: Mars recorded his fifth overall feature win of the season and second in a week. He scored an $8,000 triumph in a Corn Belt Clash event on Aug. 26 at Oshkosh (Wis.) Speedzone Raceway. … Mars gave special thanks in victory lane to James 'Gummy' Gummerson, the operator of Mid-States Equipment in Medford, Wis., who provided a Vic Hill-built engine for Mars to use. ... Shane Clanton of Zebulon, Ga., moved from the sixth starting to second place by lap 13 and drew close to Richards, but he lost the runner-up position to Eckert on a lap-24 restart and faded to ninth at the finish. … Jason Covert of York Haven, Pa., was up to sixth from the 21st starting spot for a lap-64 restart but settled for a seventh-place finish. … Frank Heckenast Jr. of Frankfort, Ill., led the race’s first lap but faded from contention, finishing 12th.

The two-day Working Man Weekend concludes with a finale that includes a last-chance race and the 75-lap WoO headliner paying $20,000 to win.

Rick Eckert of York, Pa., and Josh Richards of Shinnston, W.Va., kicked off the weekend with $2,500 victories in Friday night’s pair of 25-lap qualifying features. They will join the remainder of the top-four finishers from each preliminary — Brian Shirley of Chatham, Ill., Frank Heckenast Jr. of Frankfort, Ill., and Morgan Bagley of Tyler, Texas, in the first qualifier, and Mike Norris of Sarver, Pa., Jimmy Mars of Menomonie, Wis., and Shane Clanton of Zebulon, Ga., in the second — in a redraw to determine the top eight starting spots in the 75-lapper.