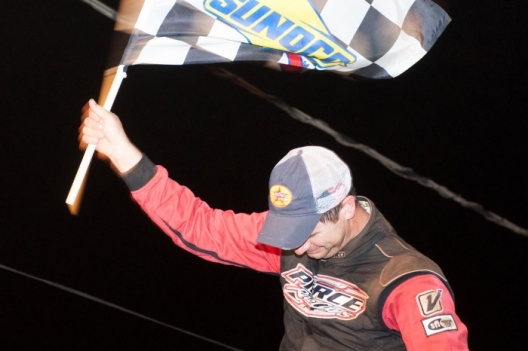 Connie Putnam/photobyconnie.com
Josh Putnam waves the checkers in victory lane at Thunderhill.
What won the race: Fast qualifier and polesitter Josh Putnam of Florence, Ala., led all the way Saturday at Thunderhill Raceway for a $4,000 Southern All Star Series victory in front of a standing-room only crowd.
Quotable: "Ya'll know my line is right around the top of this place, and (Bo Shirley made me start searching (for a new line) in (turns) three and four. I know we was good in one and two ..." Putnam said. "Bo had me searching for something better, I mean, I knew we was hanging out through the center up there, and I don't know if it was a little bit of a tire issue or what, or maybe I was just out of my rhythm and sat down there and relaxed too much (during a red flag)."
Key notes: Putnam's previous Southern All Star victory came Sept. 7, 2013, at the former Green Valley Speedway in Glencoe, Ala. ... Bo Shirley of Gadsden, Ala., challenged Putnam and was running second when he retired. ... The feature started after midnight and lasted more than an hour after a delay that included waiting for an ambulance after an emergency for someone in the stands. ... Mark Fields, the winner of a Southern All Stars event at Thunderhill on May 7, was a late arrival because his daughter had a softball game in Murfreesboro, Tenn.
On the move: Eric Hickerson of Linden, Tenn., started 18th and finished third.
Winner's sponsors: Putnam's Jed Lamb-owned Longhorn Chassis is sponsored by Jed's Lawn Care, Wolf-Pack Racing, 441 Race Wraps and Jacob Edmonson Properties.
Points chase: Entering the event, three-time and reigning series champ Riley Hickman led the standings with 944 points over Brad Skinner (838).
Car count: 18
Fast qualifier: Josh Putnam
Time: 11.40 seconds
Polesitter: Josh Putnam
Next series race: September 17, Smoky Mountain Speedway (Maryville, TN) $5,000
Editor's note: Results and race details are unofficial.