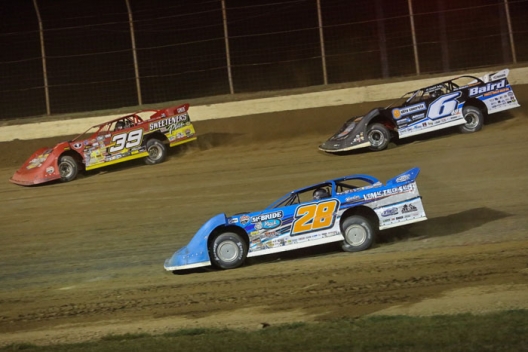 Duplicating his triumphant run the previous night at Attica Raceway Park, Davenport pushed his 2016 win total on the Lucas Oil Series to 10 and kept his hopes of defending his tour championship alive by cutting his deficit to leader Scott Bloomquist of Mooresburg, Tenn., who finished 13th, to 455 points.

“I can’t thank (crew chief) Kevin Rumley enough,” Davenport said after pocketing the race’s $12,000 first-place prize for his 26th career Lucas Oil Series win. “He has turned this whole program around in the last few weeks.”

The checkered flag certainly didn’t come easy for Davenport and his K&L Rumley team, however. While he started from the pole position in the 60-lap A-Man, he didn’t move to the front of the pack until lap 42 when he grabbed the lead for good from Tim McCreadie of Watertown, N.Y.

In a race that featured four different leaders, Davenport controlled the action down the stretch to cross the finish line 1.737 seconds ahead of Carpentersville, Ill.’s Dennis Erb Jr., who also was the runner-up to Davenport at Attica. Erb, who started fifth, overtook Davenport during the event’s first half en route to leading laps 28-41 but slipped to third place before rallying to pass McCreadie for second.

It was Jackie Boggs of Grayson, Ky., who darted forward from the fourth starting spot on the race’s opening lap to deny Davenport the honor of being the first pacesetter, but the veteran Portsmouth standout’s run out front was short-lived. He slowed on lap 11 to bring out a caution flag after the nosepiece of his car folded under due to contact with a lapped car.

“Jackie got off to a good start,” Davenport said of Boggs. “I think he went with a little softer tire. I am not sure he could have run that pace the whole race, but we will never know.”

Davenport struggled to get rolling on restarts, but he found his rhythm during the race’s second half to power his Longhorn machine by McCreadie to assume command on lap 41.

“If all of you didn’t like that then you need to go have your head checked,” Davenport said of the hotly-contested event. “They made me work for this one.

“I don’t know why these tires didn’t fire-off … it kind of got me worried. I didn’t have any traction (and) I didn’t want to run the top early on like I had to because I didn’t want to blister my tires.”

The 44-year-old Erb moved by McCreadie for fourth place in the Lucas Oil Series points standings with his second consecutive bridesmaid finish.

“We had another good car tonight,” Erb said. “This is probably the closest up front that we have started here. In the past it seems like I was always getting the hard charger of the race.

“I thought we were finally going to get a win here,” he added. “Maybe in October (in the $100,000-to-win Dirt Track World Championship).”

McCreadie, 42, fell short of his elusive first Lucas Oil victory of the season but was energized by the competitive event.

“That was a great race for the fans … it was a fun race to drive,” McCreadie said. “Our car was good up against the cushion for a while. After breaking last night (at Attica) it feels good to get a podium finish.”

Seven caution flags slowed the race. The incidents came on lap two for a tangle involving Colton Flinner, Delmas Conley and Kyle Hardy; lap 11 for Boggs; lap 13 for Audie Swartz; lap 22 for Bloomquist, who missed time trials for the second consecutive due to a late arrival; lap 23 for Brandon Sheppard, who got into the backstretch wall; and lap 46 Shannon Thornsberry.