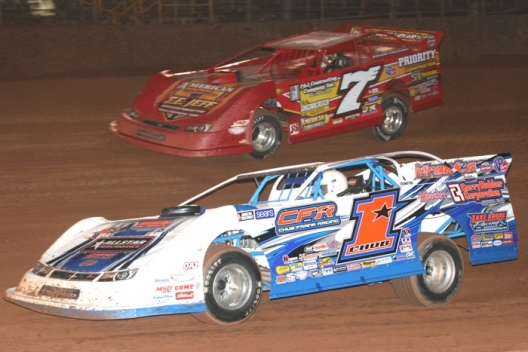 Josh Richards continued to flex his muscle on the World of Outlaws Craftsman Late Model Series, rolling to a convincing flag-to-flag triumph in the second 25-lap qualifying feature.

The caution-free event was dominated by Richards, who glided away from the pack and was never threatened. He crossed the finish line 4.723 seconds — a full straightaway — ahead of runner-up Mike Norris.

Though Richards appeared to cruise to the checkered flag, the 28-year-old superstar didn’t consider his run easy.

“I felt like it was hard,” Richards said. “We fired off leading and you don’t know how fast anyone else is running. I looked up on the board and saw second place change a few times and I saw the 91 car (Tyler Erb) get up there so I knew he was probably running hard. I never relaxed.”

With the $2,500 victory, Richards earned the right to redraw for a top-eight starting spot in Saturday night’s 75-lap, $20,000-to-win feature. He will shoot for his 18th WoO win of 2016, which would establish a new series single-season win record.

“The car was good,” Richards said, “but I feel like we need to make a few tweaks tomorrow for 50 more laps so we can run a little bit better.”

Norris, who started on the front row outside Richards, lost second place to a hard-charging Tyler Erb on lap 11 but regained the position with five laps remaining.

With his hard-compound right-rear tire coming on late in the distance, Rick Eckert overtook race-long pacesetter Brian Shirley for the lead on lap 21 and marched on to a $2,500 victory in the first 25-lap qualifying feature.

Eckert, who started third, slipped back to fourth place early in the event as he struggled to keep pace until his tire heated up. Once the race ran without caution-flag interruption after lap six, however, Eckert’s Paul Crowl-owned Longhorn machine became progressively faster, allowing him to vault past both Frank Heckenast Jr. and Chub Frank to reach second on lap 15 and glide by Shirley for the top spot off turn two on the 21st circuit.

The 2015 Firecracker 100 winner went on to beat Shirley, who also drove a Longhorn car, to the finish line by 0.951 of a second. Heckenast finished third, Morgan Bagley placed fourth and Frank settled for fifth after surging from the fifth starting spot to second by lap four.

Eckert gave some credit to an old friend for giving him some advice that proved to be a deciding factor in his success.

“Actually (Rocket Chassis co-owner) Mark Richards, I talked to him about a tire (before the race), and he said we should put a harder right-rear tire on, so we did,” Eckert said. “Everybody else in the field didn’t so I was a sitting duck there at the beginning. I thought I was in trouble, but as soon as I got the tire going I was pretty good.

“(Shirley) got bound up there behind a lapped car … that happens when you’re leading. I was gonna try to roll around him on the top that lap and then I rolled in there and that lapped car got in front of him and he had to scoot up across the track and that let me turn under him.

“I was glad for that,” he added. “We needed this. We’ll work on it a little bit for tomorrow night … and hopefully we can be standing here tomorrow.”

Also transferring to Saturday night’s 75-lap feature were 6-8 finishers Jared Miley, John Flinner Jr. and Brandon Overton — all of whom came from the rear of the field after experiencing problems. Miley and Flinner were involved in a lap-six incident when Miley slid sideways in turn four and collected Flinner, Jason Covert and Matt Lux, while Overton pitted during the lap-six caution period while holding fifth place.

The race was also slowed by a lap-two caution flag when John Weaver slid off the track between turns one and two.

With 33 cars entered in the Working Man Weekend action, Friday night’s unique qualifying includes two groups of time trials to set the lineups for a pair of 25-lap qualifying features. Each event offers a $2,500 first-place prize.

The top eight finishers in each qualifying feature will lock into Saturday night’s 75-lap, $20,000-to-win WoO finale, and the top four drivers from each preliminary will redraw on Saturday night for first eight starting spots in the headliner. The 75-lapper’s field will be filled out by Saturday night’s last-chance events and provisional starters.