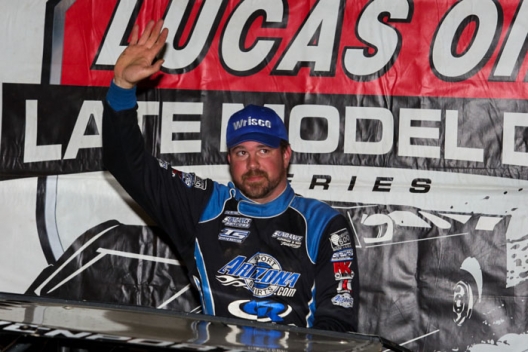 Putting his recent misfortunes behind him, the 32-year-old star from Blairsville, Ga., overtook defending Attica champion Doug Drown of Wooster, Ohio, for the lead amid slower traffic on lap 14 and marched on to capture 50-lap Lucas Oil Late Model Dirt Series feature.

The $10,000 victory was Davenport’s ninth of 2016 in Lucas Oil Series action, but it was his first since he captured the July 23 Silver Dollar Nationals at I-80 Speedway in Greenwood, Neb., and snapped his streak of three consecutive DNFs on the national tour.

“I about forgot what this feels like,” Davenport said with a smile after returning to victory lane. “This is awesome. This win goes to (crew chief) Kevin (Rumley) and my guys Jerome and Heath … they have worked their tails off the last two weeks.

“Everybody knows we haven’t been running good, but we ain’t dead and we are not done yet. We are just going to keep on working and trying to find stuff to get that little bit of an edge.”

Davenport crossed the finish line about three seconds ahead of Carpentersville, Ill.’s Dennis Erb Jr., who advanced from the 12th starting spot to pass Drown for the runner-up spot on lap 41 but was unable to threaten the reigning Lucas Oil Series champion. Drown settled for third place after leading laps 1-13, while outside polesitter Darrell Lanigan of Union, Ky., finished fourth and sixth-starter Jimmy Owens of Newport, Tenn., placed fifth.

Following the race, Davenport had nothing but praise for the stiff competition he faced from Drown, a seven-time Attica feature winner in 2016. Drown surged forward from the fourth starting spot to blast by the polesitting Davenport for the lead on the opening lap and stayed in front until lapped traffic hampered him on lap 14, allowing Davenport to assume command for good.

“I don’t know if I could have ever gotten by him without that lapped traffic,” said Davenport, who recorded his first-ever win at Attica. “He went a little softer (tire) than I did. Me and him are good buddies and we talked before the race about tires and what we were going to do. He pulled a fast one on me … he told me he was going to go with one thing and he went with something else.

“That’s what you have to do,” he continued, a sly smile on his face. “He was actually telling me about a line he runs here sometimes … I seen him do it a couple of times when I was behind him and I couldn’t get around the top so good. So once he got behind me I knew where he was going to be, so I tried to do the same thing to him and it worked out for us.”

Drown was disappointed to fall short, but the home-state hero held his head high after racing so admirably against the sport’s best with his Leroy Hall-owned Swartz car.

“I felt like if I was going to keep up with these guys I better go softer on the tires,” Drown said. “The way the moisture was coming back through the track, I thought I would be a little bit smarter than those guys … I wasn’t.

“It was cool as hell to get the lead like we did (though),” he added. “I’m very happy. We wanted a top-five tonight and we accomplished that. To race with these guys — you have a World 100 winner and a Dream winner sitting up here. To be in that mix, I’m very happy.”

Erb, meanwhile, was at his best in the race’s late stages to steal second place from Drown.

“It was a good run,” Erb said. “We started pretty far back and the racetrack came to me. We kept plugging away and ended up second. The car was working very well on the bottom.”

Notes: Davenport recorded his 25th career Lucas Oil triumph. ... Jimmy Owens of Newport, Tenn., scored his first top-five finish on the series since July 16. ... Five caution flags slowed the feature. ... Seventh-starting Jon Henry of Ada, Ohio, was eliminated in a first-lap tangle with Don O'Neal of Martinsville, Ind. ... On the third lap Timothy Culp of Prattsville, Ark., got upside-down in the second turn. He apparently wasn't injured. ... Scott Bloomquist of Mooresburg, Tenn., was a late arrival, missing hot laps and qualifying before tagging the tail of a heat. Bloomquist, who had won the previous two Lucas Oil visits to the track, was involved in a pair of cautions (on lap two for a tangle with Kyle Hardy of Stephens City, Va., who drove Troy Swindell's No. 21s, and later on lap 41), pitted multiple times and finished 17th in the feature. He points lead over Davenport shrank to a still-substantial 550 points. ... Attica hosted the Lucas Oil Late Model Dirt Series for the fourth straight year. ... The tour is also scheduled to compete at Portsmouth Raceway Park and Tyler County Speedway over a three-race Labor Day weekend.