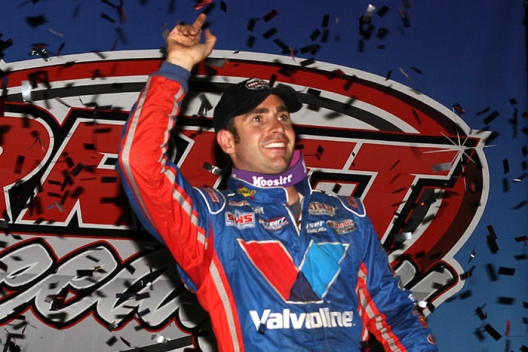 The 28-year-old superstar from Shinnston, W.Va., denied Michigan racers a sweep of the World of Outlaws Craftsman Late Model Series doubleheader, passing Rich Neiser of Fruitport, Mich., for the lead on lap 22 and then gliding away to a $10,000-plus victory in Sunday night’s 50-lap finale.

Richards dominated the second half of the caution-free event, building a commanding edge that by the checkered flag sat at 7.467 seconds over runner-up Brandon Overton of Evans, Ga., who slipped by Neiser exiting turn four on the final lap.

Neiser, who led laps 2-21, settled for a third-place finish that matched his career-best performance in WoO competition. Rick Eckert of York, Pa., started and finished fourth and reigning WoO champion Shane Clanton of Zebulon, Ga., improved two spots to complete the top five in an event that was postponed one day by rain.

The triumph was a milestone for Richards, who registered his 17th WoO win of 2016 to tie Darrell Lanigan’s single-season record set in 2014. The runaway WoO points leader also recorded his record 75th career win on the national tour.

“We got to like six or seven (wins) and I was like, ‘Man, we’ve had a phenomenal year,’” said Richards, who has four more opportunities to establish his own single-season WoO standard. “It’s crazy to think we’ve had 10 more since then.”

Richards started from the pole position and led the race’s first lap, but he immediately found Neiser to be a formidable challenger. Neiser, 46, overtook Richards for the top spot on lap two and opened a short advantage during the A-Main’s early stages as he sought to duplicate the winning effort of Lake City, Mich.’s Eric Spangler, who captured Friday night’s 25-lap WoO feature to kick off the Keyser’s Great Lakes Shootout Weekend.

But Neiser couldn’t outrun Richards, who surged back in front on lap 22 and easily controlled the remainder of the distance in his father Mark’s Rocket Chassis house car.

“The track moved around a lot more than what I thought it would,” said Richards, who also won the 2012 WoO visit to the quarter-mile Merritt oval. “I thought the bottom was gonna be better than the top, but the top had just enough brown (traction) up there. I was a little too tight early, and then once the tires got some heat in them it was a lot better.

“It was a fun night,” he added. “Rich did a great job setting the pace. He kind showed me how much brown was left up there … we had a great battle out there.”

Richards had high praise for Neiser, who also drives a Rocket machine.

“I gotta give him a lot of credit,” Richards said of Neiser. “He’s a huge reason why this (Rocket XR1) car is as fast as it is. He helped us a lot (with ideas for the car’s development) last year, him and his brother.”

Neiser spoke just as highly of Josh and Mark Richards after superlative third-place run. Though he fell just a few feet short of a runner-up finish, placing third mirrored his previous career-best outing in WoO action on Aug. 17, 2013, at Merritt.

“I got to thank Mark and Josh for helping me with that car first of all,” Neiser said. “If it wasn’t for them, it wouldn’t be what it is.”

Neiser was unable to complete a weekend sweep for the Wolverine State because his car faded just a bit too much, but he was smiling about his evening nonetheless.

“Right towards the end I got in lapped traffic and it was a little too snug to turn,” Neiser said. “I knew I was in trouble. I was hoping for a yellow.

“I represented Michigan the best I could,” he added. “Hell, as far as I’m concerned, I won the thing.”

The 25-year-old Overton, meanwhile, joined Richards and Clanton as the only drivers to log top-five finishes in both ends of Merritt’s doubleheader. The 2015 WoO rookie of the year finished fourth on Friday night.

“We just started way too far back,” said Overton, who spotted Richards and Neiser two rows by starting sixth. “We had harder tires than what they had on and they really didn’t get going until probably the last 15 laps.

“We’ve been working on it and getter better though. We did some things on the car last night that hurt us and we changed stuff today and it was jam-up.”

After bagging his first-ever WoO victory on Friday night, Spangler was never in serious contention for a repeat. The 47-year-old with four career Merritt championships to his credit started 13th and finished ninth, the first driver one lap down at the finish.