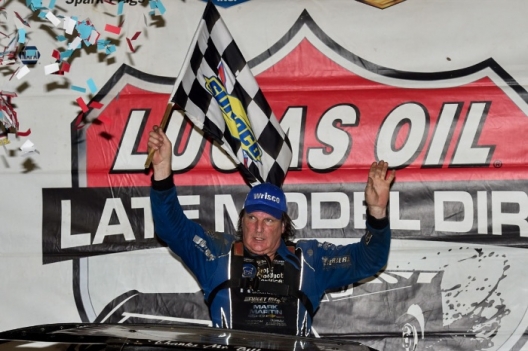 But after the 52-year-old Hall of Famer finished off two perfect evenings of competition — he also led all 50 laps of Friday night’s tour stop at Ponderosa Speedway in Junction City, Ky. — he wasn’t in a full-blown celebratory mood. He just wanted some time to kick back and relax because some mechanical trouble in the late stages of Lawrenceburg’s A-Main left him physically spent.

“We lost our power steering there at the end,” Bloomquist said after capturing the 3/8-mile oval’s Lucas Oil Series event for the second consecutive year. “We didn’t dare get up on that cushion again (after the problem surfaced). We could leave (the corners) on it, but there’s a lot more going on there than you think when you lose power steering.

“You don’t know how difficult it is to maneuver one of these cars (without power steering) … it takes about everything you got. I’m just glad that one’s over.”

In an caution-filled race run on a fast track that was made heavier than usual by rain earlier in the day, Bloomquist managed to roll into the lead off the outside pole at the initial green and stay there for the duration. He was never seriously challenged en route to recording the $12,000 triumph — his series-leading 12th of the 2016 season — by a modest 1.001 seconds over Earl Pearson Jr. of Jacksonville, Fla.

Brandon Sheppard of New Berlin, Ill., battled forward from the seventh starting spot and reached second place shortly after the feature’s midway point, but he lost a tight late-race battle with Pearson for the runner-up spot and settled for third place. Eighth-starter Gregg Satterlee of Indiana, Pa., finished fourth and 10th-starter Dennis Erb Jr. of Carpentersville, Ill., placed fifth despite slowing with a flat tire and pitting on lap 56.

Just the top five finishers ended the race on the lead lap. Colton Flinner of Allison Park, Pa., who finished one lap down in sixth place after starting 23rd, was the only other driver running at the checkered flag.

Many of the race’s casualties were forced off the track by overheating engines, but Bloomquist avoided the outbreak enough to continue his hot streak.

“My engine’s probably never gotten over 200 degrees, and we did reach up near 230 and 240 was within sight,” said Bloomquist, who won for the third time in the last four Lucas Oil Series events. “The cautions (10 flew in all) did help though … the cautions come out and we could cool it back down.”

With the fast racing conditions and sultry summer weather, Bloomquist wasn’t surprised by the overheating woes that ran rampant.

“It’s just, there’s not a lot of air moving in here,” Bloomquist said. “(The track is) kind of down in a hole, and the humidity (was high). We probably could’ve richened up the thing (carburetor) a little bit and tried to make it a little cooler, take a little timing out. Either way, we didn’t really get in the danger zone.

“I don’t like to see if that close because then you don’t have much room … but again, hat’s off to (motor builder) Andy Durham. The engine ran flawless again.”

After installing a fresh Durham engine in his Dunn-Benson Racing Longhorn Race Car earlier in the day following a subpar outing Friday night at Ponderosa, Pearson, 44, outdueled the 23-year-old Sheppard to record his third runner-up finish of the 2016 Lucas Oil Series campaign. All three of Pearson’s bridesmaid runs have come in races won by Bloomquist.

“The track was real fast after the rain, but we had track position and me and B-Shepp had one heck of a race,” said Pearson, whose previous second-place finishes came on April 16 at Batesville (Ark.) Motor Speedway and July 15 at Tri-City Speedway in Granite City, Ill. “We was waiting on Scott to try and make a mistake, but you know he ain’t gonna make one.”

Sheppard briefly appeared primed to make a run at Bloomquist after tossing his Best Performance Motorsports Rocket XR1 around the track’s cushion to overtake Pearson for second place, but he couldn’t maintain his speed on the unruly outside.

“It was pretty rough up there where I was running, but overall the track was pretty racy,” Sheppard said. “I thought we had something for them there for a minute, but the top just kept getting a little rougher and rougher and we weren’t very good down (lower) on the track.”

Notes: Bloomquist’s 74th career Lucas Oil Series victory pushed his commanding lead in the series standings to 665 points over reigning champion Jonathan Davenport of Blairsville, Ga., who advanced from ninth to third place before blowing a right-rear tire to bring out a caution flag on lap 24. Davenport didn’t return due to extensive damage to his car’s right-rear corner and finished 18th. … Making his second start in Eric Hudkins’s No. H1, Jared Hawkins of Fairmont, W.Va., was running third when he slowed to a smoking stop during a lap-30 caution period triggered when Tim McCreadie of Watertown, N.Y., slowed off turn two. … The feature’s first yellow flag waved on lap eight when Jason Jameson of Lawrenceburg, Ind., who drove Kentuckian Justin Rattliff’s car, slowed in turns one and two. … Darrell Lanigan of Union, Ky., slowed to bring out a caution on lap 16. … Wayne Chinn of Bradford, Ohio, stopped in turn four on lap 19. … Cody Mahoney of Hanover, Ind., who ran in the top five early in the race, and Jesse Lay of Walton, Ky., stopped while trying to exit the racetrack on lap 20. … Devin Gilpin of Columbus, Ind., slowed on the backstretch on lap 40 and fourth-running Don O’Neal of Martinsville, Ind., pitted under the caution period. … Colton Flinner slowed on the frontstetch to draw a caution on lap 52 but continued racing. … Dennis Erb Jr. drew a caution on lap 56 when he slowed on the backstretch with a flat tire. … The event’s final caution flag flew on lap 58 when open-wheel modified standout Nick Hoffman of Mooresville, N.C., had his car stop trailing smoke. He still was credited with a seventh-place finish after starting 24th.