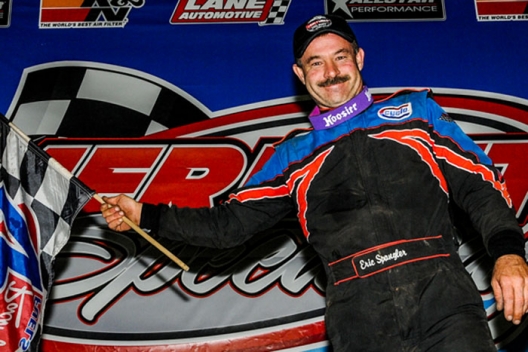 Spangler, who lives just 10 minutes from the quarter-mile oval, was ecstatic after taking advantage of his pole starting spot to lead the caution-free event from flag-to-flag without facing a single serious challenge.

“Wow! Great!” Spangler exulted in victory lane after his first-ever win on the national tour.

A four-time Merritt Speedway champion, Spangler outgunned front-row mate and WoO regular Brandon Overton of Evans, Ga., to assume command at the initial green flag and never looked back. The hometown hero negotiated lapped traffic with aplomb to become just the third driver from Michigan to win a WoO feature, joining Jeep Van Wormer of Pinconnning (2007 at Illinois’s La Salle Speedway and ’13 at Winston Speedway in Rothbury, Mich.) and Curtis Roberts of Coleman (2014 at I-96 Speedway in Lake Odessa, Mich.).

Spangler crossed the finish line 1.820 seconds in front of Greenville, Mich.’s Nick Kurtz, the 2015 UMP DIRTcar Late Model Rookie of the Year who recorded a career-best WoO placing. The 23-year-old Kurtz, who started fifth, overtook runaway 2016 WoO points leader Josh Richards of Shinnston, W.Va., for second place near the race’s halfway point but couldn’t run down Spangler to make a bid for the lead.

Spangler’s checkered flag — the first by a non-WoO regular since Scott Bloomquist of Mooresburg, Tenn., won the June 25 Firecracker 100 at Lernerville Speedway in Sarver, Pa. — resulted from some special preparation he and his family-owned team put in to gear up for the circuit’s invasion of Merritt.

“I gotta thank Keith and Tader Masters,” Spangler said of the brothers who operate MasterSbilt Race Cars in Crawfordsville, Ind. “We picked up this bare frame from ‘em two weeks ago … they built me a new car down at MasterSbilt. We put a new motor together in Lake City, me and my dad, and we brought this out three weeks later and won the first feature with it.

“Keith Masters gave me an idea of what to do with this new car here, and what he told me to do was fast right out of the box.”

Spangler also noted his team’s work in the shop — including his own.

“I’d like to thank myself and my dad … we work all week on this thing,” Spangler said. “And (crew members) Brett and Mook and Roxanne … thank you very much. Roxanne works on everything all week too. It’s just a group effort from some guys who work a regular job and come over at night and we work really hard on it.”

Spangler’s victory also provided sweet retribution for his heartbreaking loss three years ago in a WoO event at Merritt. On Aug. 17, 2013, he finished second to Tim Fuller of Watertown, N.Y., in a WoO 50-lapper at Merritt, getting nosed out by a mere 0.101 of a second in a thrilling three-wide finish that also included Michigan driver Rich Neiser.

“Oh, it feels real good,” Spangler said. “I’m sure they’ll (the WoO travelers) have something up their sleeve tomorrow (for Saturday night’s 75-lap finale paying $15,000 to win) and maybe we’ll just have to get a little quicker.”

Kurtz, who won a feature at Merritt on Aug. 13, was certainly satisfied with his runner-up finish. The sophomore Dirt Late Model driver accomplished a rare feat on the 2016 WoO series by passing the dominant Richards for position.

“It was definitely something I didn’t expect myself, to be honest with you,” Kurtz said of his performance. “These guys are just the best of the best in the country, so anytime you can run side-by-side with them and hopefully pass a couple is a good night.

“The past month has been huge for us,” he added. “Everyone at Barry-Wright Race Cars are just a huge help and I just can’t thank them guys enough. I think we got something to build on for next year.”

Richards, meanwhile, hailed the speed of the Michiganders he followed under the checkered flag.

“I said at the redraw, these locals are tough just watching them,” said Richards, who started fourth in his father Mark’s Rocket Chassis house car. “They know how to get around this track. It’s so different from what we’re used to … it’s so small and just the shape of it.

“Eric was running the top there and I was kind of following him, and then I kind of moved down but not really low enough and Nick drove by on the bottom,” he added. “Once I moved down I was better down there. We just needed about 50 — or a hundred — more laps to catch them. They were doing a good job.”

Notes: Spangler’s win was the first in WoO competition for a MasterSbilt Race Car since Rick Eckert of York, Pa., drove one to victory on May 8, 2015, at Ponderosa Speedway in Junction City, Ky. … Richards pushed his commanding edge in the WoO standings to 260 points over Clanton with just five events left on the 2016 schedule. If Clanton were to win all the remaining A-Mains, Richards would need to average just a 26th-place finish to secure his record fourth championship. …