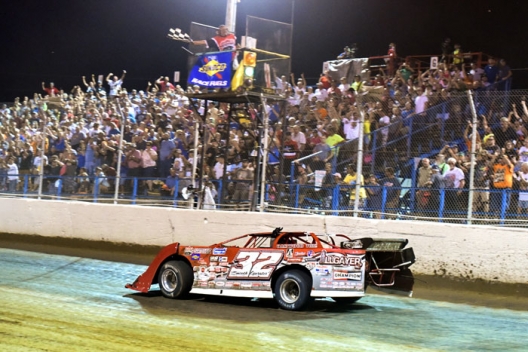 UNION, Ky. (Aug. 13) — Bobby Pierce of Oakwood, Ill., made history on Saturday night at Florence Speedway, becoming the youngest driver to ever win the northern Kentucky oval's Sunoco North-South 100. And the 19-year-old UMP DIRTcar Summernationals champion did it in style.

Advancing from the 16th starting position, Pierce slid ahead of race leader Scott Bloomquist of Mooresburg, Tenn., on lap 90, leading the final 10 circuits to capture a $50,000 Lucas Oil Late Model Dirt Series victory, his second of the season.

“I can’t even put into words what I’m feeling right now,” Pierce said after the race. “Between the $50,000 and just the whole history of this place and the race and the National Dirt Late Model Hall of Fame being here and everything. It’s just crazy.”

Pierce follows in the tire tracks of father Bob, who won the North-South 100 back in 1999, when the second-generation driver was just three years old.

“If you told me my first crown jewel win would have been the North-South a year ago, I would have probably punched you in the face,” Pierce said jokingly. “We’ve struggled here. I think my first time here was when I was 12 and honestly from that point on, I never caught on. I didn’t even make the race last year. To win it, it’s just really crazy."

It was polesitter and two-time North-South winner Don O’Neal of Martinsville, Ind., charging to the lead at the drop of the green flag, fighting back early challenges from Bloomquist. But disaster struck on a lap-32 restart, as O’Neal and third-running Jared Landers of Batesville, Ark., made contact before taking the green flag, the pair coming to a halt in turn-one. Track crews were able to unhook the two, but both drivers were forced to return to the rear of the field after making a stop in the hot pit.

Inheriting the lead on lap 33, Bloomquist cruised over the field, as a three-car battle between Brandon Sheppard of New Berlin, Ill., Dale McDowell of Chickamauga, Ga., and Jason Jameson of Lawrenceburg, Ind., ensued for the runner-up spot.

As the race neared the checkers, Pierce worked his way through the field to join the frontrunners, sliding ahead of Tim McCreadie of Watertown, N.Y., and Devin Moran of Dresden, Ohio, to move in to the fourth-place position on lap 79. With less than 20 laps remaining, Pierce began his charge, running second when a yellow flag waved on lap 83.

Using the restart to his advantage, Pierce gunned around the top side of the racetrack, sliding ahead of Bloomquist in turn two to take the point on lap 90. He led the remaining circuits unchallenged, earning his richest career payday and first career crown jewel victory.

Finishing runner-up, Bloomquist was critical of the late-race pass in his victory lane interview, but it didn’t phase Pierce, who was eyeing his first career crown jewel victory.

“He (Bloomquist) was kind of diving in the corners harder than anyone else because his car would really stick and that’s just his line. I went in there and i just got him a little bit with the quarter panel,” Pierce said. “But it was anything serious. He just didn’t like it. But it’s for the win on a crown jewel. It’s just racing hard. That’s what I told him. I’m sure he’ll get over it. We’ve got a lot more races with him and I’ve always looked up to him.”

It was a disappointing end for Bloomquist, who was aiming for his first North-South 100 victory since 2000.

“It’s kind of like most passes Bobby makes,” Bloomquist said. “They’re all pretty disrespectful. To go in and just take our front end up … we had to park on the exit of two there.

"We just didn’t get fired up as good. It looks like the left-rear tire is chewed up pretty bad. We had a good rhythm going, but having multiple cautions there, there tire was torn up and it let it seal up. We just didn’t run quite as good as we were running."

Behind Pierce and Bloomquist at the checkers was eighth-starting McDowell, who advanced five spots to run third. Improving from the 14th starting spot, Moran notched a fourth-place finish, with O’Neal rallying from the tail of the field to round out the top five after the early caution.

“We had a rough night Thursday night and come back tonight with a top-five,” McDowell said. “We had to make some adjustments here. We’ve been fortunate. We’ve run this car three times and we’ve won all three previously, but we’ve not changed anything. We’re pleased. Any time you can run top-five with this bunch, I’m happy."

Notes: Bob and Bobby Pierce are the first father-son duo to each win the North-South 100. ... The youngest winner, Pierce is also the first driver to win the North-South 100 while making their first start since Rodney Combs of Lost Creek, W.Va., did so in 1991. ... Bloomquist, who is winless in the North-South 100 since 2000, settled for his seventh runner-up finish in the crown jewel event; he also has a trio of third-place finishes. ... McDowell finished among the top four for the third time in the last four North-South 100s. ... With a sixth-place finish, Dennis Erb Jr. of Carpentersville, Ill., turned in his best North-South 100 performance. ... First-time starter Jackie Boggs of Grayson, Ky., was the top home-state finisher in seventh. ... Defending Lucas Oil Late Model Dirt Series champion and North-South 100 winner Jonathan Davenport of Blairsville, Ga., ran in the top five early, but drew a caution on lap 32 and finished 25th. ... Fifth-starting Jimmy Owens of Newport, Tenn., placed a quiet 15th and failed to lead a lap during the event for the just the second time in the last seven seasons. ... Billy Moyer of Batesville, Ark., started the event for the first time since 2012, finishing eighth in what could be his final North-South 100 appearance. Moyer's long-time crew chief Steve Norris was inducted into the National Dirt Late Model Hall of Fame over the Florence weekend. ... Matt Miller of Whitehouse, Ohio, won the $2,500 non-qualifiers' race.

12:00 a.m. (lap 79): Bloomquist maintains his lead as Bobby Pierce slides ahead of Tim McCreadie and Devin Moran to move in to the fourth spot.

11:50 p.m. (lap 68): A yellow flag waves as Jameson slows on the frontstretch with right-rear damage. Bloomquist leads Sheppard, McDowell, McCreadie, and Devin Moran, who has advanced from the 14th starting spot.

11:47 p.m. (lap 58): Bloomquist distances himself from the field in lapped traffic. Sheppard, Jameson, McDowell and Tim McCreadie round out the top five.

11:42 p.m. (lap 43): Bloomquist contiues to lead, while Jameson charges around the high-side to challenge Sheppard and McDowell for the second-place spot.

11:29 p.m. (lap 32): O'Neal and Landers collide in turn four as the race comes to green, prolonging the caution. Track crews work to untagle the pair that are hooked together.

11:20 p.m. (lap 20): Charging around the high-side, Landers moves in to third, challenging Bloomquist for the runner-up spot.

11:08 p.m.: Driver introductions are complete and cars start rolling out for pace laps.

10:55 p.m.: Feature cars roll to the infield and and crews begin bolting on right-rear tires.

Among the eight drivers making the North-South 100 lineup for the first time are Tommy Bailey of Corbin, Ky., Jackie Boggs of Grayson, Ky., Ricky Weiss of Headingley, Manitoba, and Tim Dohm of Cross Lanes, W.Va. … Lucas Oil Series provisionals will go to Darrell Lanigan of Union, Ky., Earl Pearson Jr. of Jacksonville, Fla., and Colton Flinner of Allison Park, Pa. … Ethan Burgess of Sharonville, Ohio, receives the track provisional to take the final feature starting spot. … Second-generation drivers Devin Moran of Dresden, Ohio, and Bobby Pierce of Oakwood, Ill., will look to tackle the same feat as their fathers Donnie and Bob. The elder Moran won the North-South 100 in 1996, while Pierce won in 1999. Boggs’s father Jack is also a three-time North-South winner. …Home-state drivers Darrell Lanigan and Steve Francis of Ashland are making their 21st career North-South 100 start, while Scott Bloomquist qualified for the event for the 20th time. ... A $2,500-to-win non qualifiers’ race will follow the 100-lapper.

Outside polesitter Tommy Bailey led the opening lap, with a three-car battle ensuing for the runner-up spot. Charging from the tail of the field, Jackie Boggs moved in to the fourth-place spot on lap four. A yellow flag flew on lap the fourth lap for Trevor Landrum. Using the restart to his advantage, Boggs edged Jake O’Neil for the second-place spot on lap six. Landrum got in to the frontstretch wall to draw a second yellow flag on lap 13, setting up a two-lap dash to the finish. Bailey held off Boggs to win the consolation, with Boggs running second to transfer to the feature.

Polesitter Matt Miller led the opening lap, as fourth-starting Tim Dohm charged to the front to challenge Ricky Weiss for the runner-up spot. Working around the bottom of the racetrack, Dohm pulled ahead of Miller to take the lead on lap five. A yellow flag waved on lap six when Kenny Cobble slowed in turn two, with fifth-running Earl Pearson Jr. pitted under the caution. Using the restart to his advantage, Weiss overtook Miller for the second-place spot. Colton Flinner spun in turn two to draw a caution on lap 12. Dohm pulled away to win the second consolation, with Weiss grabbing the final transfer spot.

Polesitter Tim McCreadie charged to the lead at the drop of the green flag, as Ray Cook and Josh Rice battled for the runner-up spot. By lap five, the top three cars had distanced themselves from the remainder of the field. Working his way through lapped traffic, McCreadie won the first consolation to transfer to the main event. Rice slid Cook in turns three and four on the final lap, but came up short at the checkers, with Cook transferring to the feature.

As part of the tour’s tire experiment, the 16 drivers locked in to Saturday’s feature have already selected their right-rear tire for the 100-lapper. In attempt to prevent illegally altered tires, each team qualifying for the weekend finale will be provided a right-rear tire, with no cutting, siping or buffing permitted. … Despite a brief rain shower, the 2016 National Dirt Late Model Hall of Fame induction ceremony was held Saturday afternoon. … Southern Nationals champion Devin Gilpin of Columbus, Ind., was on hand for Friday’s preliminaries, but scratched after hot laps because of engine troubles. … Chris Madden of Gray Court, S.C., is headed home after sustaining front-end damage in Friday’s first round of heat race action. … Among the drivers already locked in to the main event are four former North-South 100 winners, including Don O’Neal, Scott Bloomquist, Jimmy Owens and Jonathan Davenport. … Only two home-state drivers, Michael Chilton of Salvisa, and Steve Francis of Ashland, are already locked in to the starting grid. … While Hall of Famer Billy Moyer of Batesville, Ark., is a former Ralph Latham Memorial winner, he is still eyeing is first career North-South 100 victory. … Based on perfect attendance, Ethan Burgess of Sharonville, Ohio, is expected to be the track’s provisional starter.

The Lucas Oil Series action wraps up on Friday night with Florence Speedway’s Sunoco North-South 100 finale. The first eight rows of the 34th annual event have already been set up by a double round of heat races contested Friday night.

Based on Friday’s combined passing points totals, two-time North-South 100 winner Don O’Neal of Martinsville, Ind., and Scott Bloomquist of Mooresburg, Tenn., will start on the front row of Saturday’s $50,000-to-win feature. O’Neal most recently captured the event in 2012, while Blomquist’s last North-South victory came back in 2000.

Saturday’s program will include three 15-lap consolation races, with the top two finishers from each race transferring to the main event. Series and track provisionals will make up the final two rows of the feature lineup. Along with Late Models, UMP modifieds will also compete for a $2,000 prize.