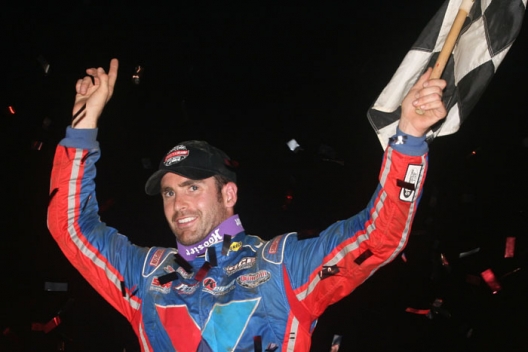 HAMMETT, Pa. — With his victory Sunday at Eriez Speedway, Josh Richards of Shinnston, W.Va., won his fifth race in the last six World of Outlaws Craftsman Late Model Series events, his career-best 16th of the season and for the fourth time on the series at the 3/8-mile oval in northeastern Pennsylvania.

But the 28-year-old driver who appears to be cruising toward a fourth WoO title isn’t getting hung up on any statistics.

“The numbers, they’re cool and everything,” Richards said, “but I just love to get to race and put on a good show for the fans. That’s all I could ask for.”

The show at Eriez was primarily in a battle with Steve Casebolt of Richmond, Ind., who led the first 29 laps before Richards found a way by in the high groove and stretched away to win by 2.6 seconds and pick up the $10,000 winner’s purse.

Richards, who also won at Eriez in 2007, ’10 and last season, drew within one victory of the single-season victory record of Darrell Lanigan of Union, Ky., set in 2014.

“My buddy Casebolt, he was going a really good job there, and he was protecting the middle. I just tried to move around and find some speed, and found a little bit off the top (groove) at both ends and was able to by there” said Richards, who has a series-leading 74 career victories. “He’s had a tough (stretch), he’s been wanting to win one, but it’s been a phenomenal year for us, I just can’t thank everyone enough.”

Richards was solid all night, except in the redraw. Richards was the fastest driver in practice, picked up his eighth fast time award and raced to his 24th heat race win. But he pulled the eighth spot in the night’s redraw, putting him outside the fourth row in the main event. The two local drivers and five fellow full-timers ahead of him made his climb to the top treacherous.

“I knew when we drew the eight it was going to be tough,” Richards said. “I always enjoy racing in this region. It’s closer to home, and we’ve raced these tracks for quite a while, and having success here before gives you a little more information on what to do. It definitely gives you confidence.”

Casebolt took advantage of his pole position to control the first half of the race while Richards was working his way toward the front.

Richards was up to third by lap seven, then took the second spot from Miley on the 15th lap and began his pursuit of Casebolt.

“We got up to third really quickly,” Richards said. “We were all at the same speed and nothing was happening. Casebolt was setting a really good pace, and I had to work hard on him for the lead.”

Casebolt fended off Richards for several laps, but maneuvering high and low, Richards made the pass for the lead in turn two on lap 29. He wasn’t seriously challenged the rest of the way.

When Casebolt met Richards in victory lane, the two talked about where the track’s fastest points were. Casebolt said that “he had nothing” for Josh, who has been on a hot streak all season.

“I’m as happy as I can be finishing second,” Casebolt said. “I had a very good car. I knew Josh was back there but there was nothing I could do. With the season that we’ve had, we’re definitely happy to finish second and lead some laps.”

Miley, who said he took a little time off to prepare for the national touring event, posted and impressive podium finish.

“I’m very happy to run as well as I did,” Miley said. I had a lot of fun battling with Blair there at the end.”

Notes: Thirteen drivers completed 50 laps. … The previous night’s WoO winner at Winchester (Va.) Speedway, Billy Moyer Jr. of Batesville, Ark., ended up a lap down in 14th. … Bump Hedman spun inside turn two for an early caution. … Morgan Bagley had a right-front tire go down and spun exiting turn four on lap 13 and a passing car damaged the nose of Bagley’s machine. The Texan retired. … Joey Coulter spun in turn four on lap 19 with Frank Heckenast Jr. among those in the scramble. … Heckenast was later involved in another caution when Brian Shirley got around in turn four. … Dave Hess Jr. slowed for a lap-46 yellow.