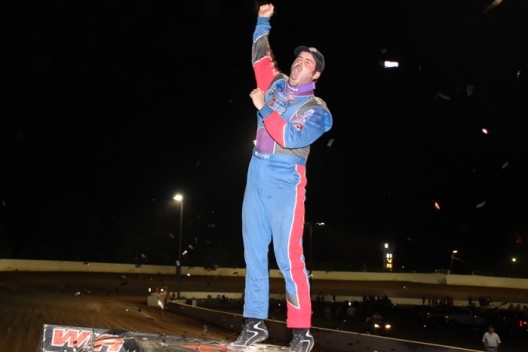 After scoring a flag-to-flag triumph in Saturday night’s 50-lap World of Outlaws Craftsman Late Model Series feature at Winchester Speedway, the 28-year-old son of a Hall of Famer was able to put an elusive checkered flag on his growing resume.

“Just to win on this Outlaw deal means a lot,” said Moyer, who is cruising toward 2016 WoO rookie of the year honors. “We’ve been close before but never got the job done, so this is real exciting. I’ve never a national touring event and now I can say I’ve done it.”

Making his second career start at the 3/8-mile oval, Moyer surged off the outside pole to grab the lead from front-row mate Shane Clanton of Zebulon, Ga., on the race’s initial start. He was never headed nor even seriously challenged as he marched to a first-ever WoO victory and a $10,000 payday.

Jason Covert of York Haven, Pa., made a late charge to pull within striking distance of Moyer in the closing circuits, but the 46-year-old driver slipped high through turns three and four when he attempted a last-ditch bid on the final lap. Covert finished 0.689 of a second behind Moyer, duplicating his runner-up effort in the previous night’s WoO A-Main at Potomac Speedway in Budds Creek, Md.

Clanton settled for third place, salvaging a bronze medal after a poor start saw him fall from the pole position to fifth place by lap two. Runaway WoO points leader Josh Richards of Shinnston, W.Va., who started sixth, had his four-race series win streak come to an end with a fourth-place finish and former Winchester WoO winner Dale Hollidge of Mechanicsville, Md., completed the top five after starting seventh in a car fielded by Winchester promoter Greg Gunter.

The highest-profile success of Moyer’s budding career came after he began the four-race WoO Mid-Atlantic swing in rough fashion. He finished 17th on Thursday night at Delaware International Speedway in Delmar and placed 13th on Friday evening at Potomac.

“We’re just on such a rollercoaster, up-and-down,” said Moyer, who drove a Billy Moyer Victory Race Car designed by his legendary father. “Last night we’re lapped traffic and in the way and tonight we win — it’s just crazy how things go sometimes.

“Tonight Josh (Richards) beat us in the heat (for the win), but I think we were maybe equal. He might have been a tick better and he got me on the start, but I stayed close to him. Then we got lucky and hit the redraw (for the outside pole).

“But no matter how much luck’s involved,” he added, “you still gotta drive the car.”

And on this evening, Moyer did that to perfection. He maintained control following three mid-race caution periods, leading by as much as a full straightaway at times before Covert closed the gap in the final laps.

“ClAnton ran me clean,” Moyer said of the driver whom he outgunned for the lead when the feature began. “I beat him in the (first) corner a little bit, but he could’ve roughed me up, scuffed me up the track, and he didn’t. And dad always told me that Covert will run you clean and he did (on the restarts).

“At the end there with like five (laps) to go I think I was just zoned out to just not miss the bottom, and I think that let Covert catch up some. He was on my ass at the end I think, but at the end I’m not gonna let somebody go underneath me. If they’re gonna pass me on the outside, they’re gonna have to work hard to do it.”

Covert tried to run the top side to a dramatic victory at one of the tracks his Cameron-Mann Motorsports team has frequented over the years, but he couldn’t get his Rocket XR1 to stick sufficiently on the last lap.

“With about four to go I started getting after him,” Covert said. “I don’t know if he was slowing down on purpose with the lapped cars or not, but I actually was able to get going pretty good. The track kind of cleaned off and I could drag my left sides through he middle of the corners and we got closer, but it wasn’t enough.

“I went in there (turn three) hard on the last lap, but when I turned left it wheel-hopped all the way through the black marks down there.”

Covert was disappointed to fall just short of a first-ever WoO triumph for the second consecutive night.

“If you’re not first, you’re last,” Covert asserted. “That’s what second is.

“But (Moyer) did a good job. Most races are won from the outside pole here anyway … that’s just the way it is.”

Clanton, 40, was satisfied with his third-place finish after coming out of the starting gate in dismal fashion.

“I spun the tires (on the initial start) and then (Moyer) got a run on the top and went to the bottom,” Clanton said. “I said, ‘I’m gonna try the top,’ and there was just pure grease, water, slime up there in (turns) three and four. I said, ‘Oh, my god,’ and I went sideways and they all went by me. I just had to fight my way back to third.

“I was just too tight right across the middle anyway, though,” he added. “We missed the setup a little bit. We’re angry because we started on the pole and run third, but overall it’s been a good weekend — three podiums (in a row), so we’ll take that.”

The race’s three caution flags flew on lap 24 for Tyler Horst of Waynesboro, Pa., who slowed in turn two; lap 32 for Morgan Bagley of Tyler, Texas, who spun in turn two; and again on lap 32 after Kyle Hardy of Stephens City, Va., and Mark Pettyjohn of Milton, Del., made contact with racing for sixth place and spun together in turn four.

Notes: Moyer ended a 10-race stretch in which every WoO A-Main was won by either Richards (seven) or Clanton (three). The last time a driver not named Richards or Clanton had been victorious was July 7 at Hamilton County Speedway in Webster City, Iowa. … Moyer’s previous best WoO finish this season was third on April 2 at Farmer City (Ill.) Raceway. … Mark Pettyjohn rallied from the rear after his feature spin to finish 10th, one spot behind his older brother Kenny Pettyjohn of Millsboro, Del. … Jamie Lathroum of Mechanicsville, Md., was back in his own familiar No. 6 machine after driving Jack Bland's No. 41 at Delaware and Potomac. He blew a power steering line in hot laps, however, and his crew scrambled to make repairs just in time for qualifying; he was later involved in a heat-race tangle with Andy Fries of Mercersburg, Pa., but transferred to the feature through a B-Main and finished 19th despite completing all 5 laps. … Attendees dealt with sultry conditions — temperatures in the high 90s with heat index values as high as 110 degrees.