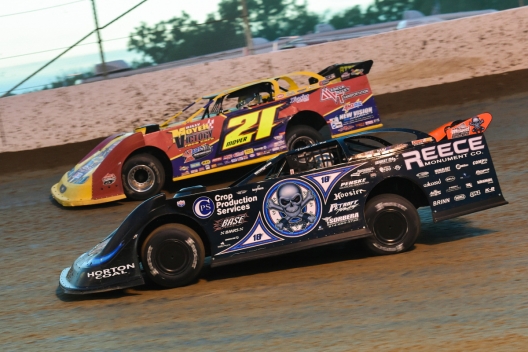 O’Neal and Bloomquist were the top finishers in combined passing points after two rounds of six preliminary heat races for the $50,000-to-win event. A total of 16 drivers were locked in to Saturday’s 100-lapper based on their combined heat races finishes, and will line up in the order of their points totals.

Following O’Neal and Bloomquist were Jason Jameson of Lawrenceburg, Ind., and Sheppard. Jimmy Owens of Newport, Tenn., rounded out the top five in the combined points standings.

With the frontrunners going four-wide down the backstretch, Mike Benedum pulled ahead to lead the first lap. Splitting Benedum and second-running Dennis Erb Jr., Don O’Neal shot to the front of the field on lap two. Advancing from the final starting spot, Jared Landers moved in to fifth by lap five. Darrell Lanigan slowed on the frontstretch to draw a caution on lap eight. Using the restart to his advantage, Billy Moyer challenged O’Neal, but the race leader pulled away to win the final heat race. Moyer ran second, with Erb rounding out the podium in third.

Losing a driveshaft, Scott James pulled in to the infield before the race took the green flag. Third-starting Jason Jameson jumped to an early lead, with Mike Marlar improving from the tail to run fifth by lap five. Jameson went on to pick up the heat race win, with Matt Miller improving from the fourth-starting spot to run second. Polesitter Colton Flinner slipped to finish third, with Marlar advancing from the 10th starting spot to run fourth. Cody Mahoney rounded out the top five.

Polesitter Bobby Pierce shot to an early lead, distancing himself from second-running Ray Cook in the opening laps. With outside polesitter Nick Latham slipping one spot to run third, Chad Stapleton advanced from the seventh starting spot to run fourth by lap five. Austyn Mills spun in turn four to draw a caution on lap six. Using the restart to his advantage, Latham moved in to the second position, reeling in Pierce. But it wouldn’t be enough, as Pierce grabbed the heat win. Latham finished second, with Cook running third.

Outside polesitter Steve Francis jumped to the lead at the drop of the green flag, with Jimmy Owens advancing from the tail to run fourth by the third lap. Improving from the fifth starting spot to run second, Dale McDowell set his sights on Francis, as Owens moved into third at the halfway mark. Francis fought back challenges from McDowell to win the third heat, with McDowell finishing second. Owens rounded out the podium.

Charging from the third starting spot, Scott Bloomquist shot to the lead on the first lap, pulling away from the field in the early running. Working around the top of the racetrack, second-running Brandon Sheppard began reeling in the race leader, with Josh Rice improving from the rear of the field to run third mid-race. Bloomquist picked up the heat race win, with Sheppard finishing second. Earl Pearson Jr. edged ahead of Rice to take third at the checkers.

Polesitter Jimmy Owens led the opening lap, as Scott Bloomquist advanced from the eighth starting spot to run sixth. A yellow flag waved on lap two for debris on the racing surface. Owens maintained his lead over the field at the halfway point, as Bloomquist and fourth-starting Moyer battled for the runner-up spot. Owens pulled away to win the sixth heat, with Bloomquist edging ahead of Moyer finished second at the line. Moyer ran third, with Tim McCreadie finishing fourth. Josh Rice rounded out the top five.

Polesitter Gregg Satterlee jumped to an early lead, with Jackie Boggs slowing to draw a caution on lap two. Working around the high-side, sixth-starting Doug Drown edged ahead of Satterlee to take the lead on lap six. Advancing from the 10th starting spot, Sheppard moved in to a podium position on lap eight. Drown won the fifth heat, with Sheppard finishing second at the checkers. Satterlee slipped to run third, with Jonathan Davenport improving one spot to finish fourth. Ray Cook rounded out the top five.

Polesitter Jared Landers distanced himself from the field in the early laps, with Mike Marlar and Tim Dohm battling for the runner-up position. Charging around the high-side, seventh-starting Darrell Lanigan moved into to the third-place sport at the halfway point, setting his sights on second-running Marlar. Tagging the turn-four wall, Mason Zeigler drew a caution on the 12th lap, setting up a one-lap dash to the finish. Landers picked up the win, with Marlar holding off Lanigan at the checkers to finish second. Lanigan ran third, with Dohm slipping one spot to finish fourth.

Outside polesitter John Gill charged to the lead at the drop of the green flag, with Scott James drawing a caution on the first lap. Shooting under Gill, Michael Chilton grabbed the lead on lap three, with Don O’Neal improving from the eighth starting spot to run third. After a side-by-side battle with Chilton, O’Neal charged to the lead just past the halfway mark. James spun in turn two to draw a second caution on lap 10. O’Neal won the third heat, with Chilton finishing runner-up. Jason Jameson advanced from the ninth-starting spot to run third.

Getting sideways coming out of turn-two, seventh-starting Chris Madden sustained  front-end damage on the first lap, but never slowed to draw a caution. Polesitter Chris Combs jumped to an early lead, with a tight battle ensuing between Ricky Weiss and Jake O’Neil for the runner-up spot. Combs held off a charging O’Neil to win the second heat, with Weiss rounding out the podium. Dennis Erb Jr.  ran fourth, with Chad Stapleton finishing fifth.

With outside polesitter John Whitney shooting to the bottom of the track on the opening lap, fourth-starting Devin Moran charged around the outside to take an early lead. As Moran distanced himself from the field, Tommy Bailey worked his way from the fifth starting spot, running second at the halfway point. Whitney fading, Chris Brown improved from the 10th starting position into the top three with two laps remaining. Moran picked up the heat race win, with Bailey finishing second. Brown finished third, with McDowell running fourth. Jason Feger rounded out the top five.

Besides Late Models, Friday’s program will also include prelims for Saturday’s modified feature. … Scott Bloomquist of Mooresburg, Tenn., was the winner of Thursday’s Ralph Latham Memorial. He’ll aim for his first North-South 100 victory since 2000. … Jonathan Davenport of Blairsville, Ga., is the defending North-South 100 winner. He posted a top-10 finish in Thursday’s $30,000-to-win event. … Dustin Linville of Bryantsville, Ky., is among a handful of drivers not returning for Friday’s action. He is sidelined for the next couple of weeks after sustaining a concussion in a rollover incident during Thursday’s feature. … Among drivers making their first weekend appearance at Florence are Devin Gilpin of Columbus, Ind., and Chris Combs of Isom, Ky. … Cody Mahoney of Madison, Ind., and Devin Moran of Dresden, Ohio, picked up special event victories at Florence earlier this season, while John Whitney of Clarksville, Ohio, is the track’s weekly points leader. ... Jake O'Neil of Tucson, Ariz., and Kyle Bronson of Brandon, Fla., are among drivers making their first-ever appearance at Florence this weekend.

For the third straight year, Florence will utilize a passing points format (no time trials) for the event. Friday’s preliminary action will include two sets of heat races lined up by random draw. The first set of heats will line straightup by draw and the second set will be inverted. There will be six heats in each session, lap count will vary based on the number of cars in each (number of cars plus two laps).