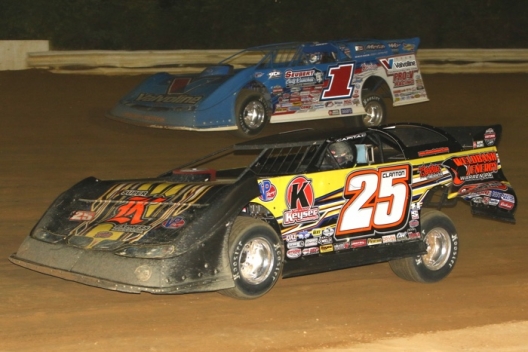 Josh Richards continued his sizzling summer stretch Friday night at Potomac Speedway, running his World of Outlaws Craftsman Late Model Series win streak to four in a row with a $10,000 triumph in the Gunter's Honey 50.

The 15th victory of Richards’s spectacular 2016 season was also historic. It was his 73rd career WoO win, moving him past Darrell Lanigan of Union, Ky., into sole possession of the top spot on the national tour’s all-time checkered flag list.

Richards, 28, of Shinnston, W.Va., steered his father Mark’s Rocket Chassis house car forward from the fourth starting spot to grab the lead from reigning WoO champion Shane Clanton of Zebulon, Ga., on lap 27 and never looked back en route to a milestone win that left him awestruck.

“I know Darrell (Lanigan) got on those streaks and won a lot of races those couple years,” said Richards, whose first career WoO victory came on Aug. 15, 2005, at Lebanon Valley Speedway in West Lebanon, N.Y. “I was always like, ‘Oh, we’ll never catch that.’ But this year has just been really unreal and now we’re on top.

“It’s really unbelievable to be able to say that,” he added. “I looked up to a lot of these guys growing up, and now to be the guy on top (of the win list) — at least for now — is really cool.”

Richards took the checkered flag 1.364 seconds in front of York Haven, Pa.’s Jason Covert, who matched his career-best WoO finish. Racing at the home track of his Cameron-Mann Motorsports team, the 46-year-old driver led laps 17-24 before being overtaken by Clanton and Richards but regained second from Clanton lap 31.

Clanton, 40, settled for a third-place finish after leading laps 25-26. Outside polesitter Brandon Overton of Evans, Ga., finished fourth and Rick Eckert of York, Pa., snuck forward from the 10th starting spot to complete the top five.

Chub Frank of Bear Lake, Pa., started from the pole position and led laps 1-16, but he gradually slipped backward to sixth at the finish. He said an incorrect tire choice hampered his hopes of ending a WoO winless that sat at 276 races and nearly seven years entering the evening’s action.

Coming off a Thursday-night victory at Delaware International Speedway in Delmar, Del., to kick off a four-race Mid-Atlantic WoO swing, Richards was the consensus favorite to keep rolling at the 3/8-mile Potomac oval. He had his doubts, however, about inching another step closer to Lanigan’s WoO single-season win record of 17 set in 2014.

“At the start of the race I got kind of hung on the outside and shuffled back to fifth,” said Richards, who won last year’s WoO event at Potomac. “I really thought it looked like Covert’s car was really good and he was gonna drive up through there (from the third starting spot) and drive off. I felt like I was too free (handling) to be able to win, but it seemed like the longer the race went that middle (lane) came in and we were good again.”

After Covert bobbled trying to pass a lapped car and lost the lead to Clanton on lap 25, a caution flag that same circuit left Covert and Richards side-by-side behind Clanton for a Delaware double-file restart. Two attempts to return to green-flag racing were aborted before Richards finally made his move, surging ahead of Covert on the initial restart and then passing a sideways Clanton for the lead off the inside of turn two on lap 27.

“We got that restart and I knew I could probably get by Covert there on the outside and we did,” Richards said. “Then Clanton just slipped up a little bit and opened up the door. He lost a little bit of ground off of two and I got by him.

“That’s what I felt like early in the race,” he continued, alluding to Clanton’s handling troubles. “But it turned around where we got grip and (Clanton) lost a little bit. It was still definitely a handful — definitely a little too free for comfort — but it was good enough to pull out a win.”

With the final 20 laps running without interruption after eight caution flags plagued the race’s first 30 circuits, Richards maintained a steady half-straightaway advantage over Covert, who slipped past Clanton for second on lap 31 but couldn’t draw close enough to threaten the leader.

Richards was certainly glad he didn’t have to deal with Covert in open track.

“Racing out in clean air I feel like Covert probably had the best car,” said Richards, who pushed his points lead to 248 markers over Clanton. “I just don’t know if I would’ve have enough to pass him. I was doing real good out in the open by myself where I could run where I needed to, but I was a little too free to stick and drive under somebody.”

Covert was succinct with his feelings following the feature. With a healthy contingent of his team’s local supporters on hand he dearly craved a victory, so falling short left him deeply disappointed.

The two-time Potomac champion blamed himself for his loss.

“Our car was fantastic,” Covert said of his Rocket XR1 mount. “The boys did a great job. The driver just didn’t do a good job.

“Josh just outdrove me. He’s just that good, that talented.”

“The driver just didn’t do his part,” said Clanton, who started sixth. “When you get the lead and you give it back, it’s the driver’s fault.

“I thought when I passed (Richards) and kept him back there for a little bit I thought I’d at least outrun him tonight, but it just shows how good that team is right now. Everything’s gelling for them. He’s got a good race car. He can go anywhere he needs to to pass cars, so it shows they’ve done their homework and we’ve got to do a little more.

“My (Capital) car was good. When I got by the 76 (Overton) and run Chub down and started catching the 72 (Covert), and then Covert got squirrelly down he frontstraightaway with the (lapped car) and he just gave me enough room of turn two to get by him … at that time my car was real good. But with caution after caution, I don’t know if I didn’t keep my tires hot enough or something, but I wasn’t good enough after that.”

Clanton nearly lost control of his car off turn two on lap 27, allowing Richards to vault past him to take the lead.

“I was just driving too hard I guess, just trying to keep the lead,” Clanton said. “I ain’t never run no good at places like this and I was leading, and I didn’t know where I needed to be or if I needed to slow up getting in the corner. My guy’s telling me to go to the top and I go to the top and hang sideways, so what do you do?”

Two multi-car tangles were among the race’s eight caution periods. The first came on lap five when Brian Shirley of Chatham, Ill., Joey Coulter of Charlotte, N.C., Jason Miller of Winchester, Va., and Nick Davis of Millsboro, Del., slid together in turn two. Another jingle occurred on a lap-25 restart when Frank went sideways in turn two after contact from Dale Hollidge of Mechanicsville, Md., setting off a pileup that claimed Frank Heckenast Jr. of Frankfort, Ill., and Kenny Pettyjohn of Millsboro, Del., as Frank and Hollidge continued on without losing any positions.

Notes: The last 10 WoO A-Mains have been won by either Richards (seven) or Clanton (three). … After becoming the first female driver to lead a WoO feature and finishing fifth Thursday night at Delaware International, Amanda Whaley of Millsboro, Del., registered the second-fastest lap in Group 1 of time trials and made the redraw for the second night in a row after overtaking Coulter on a last-lap restart to finish second in Heat 2. She started fifth in the A-Main but fell out of the top five before retiring on lap 25 due to a broken driveshaft. … Tyler Erb of New Waverly, Texas, blew a right-rear tire in Heat 2 but came back to transfer through a B-Main and advance from 21st to 10th in the feature. … A rough first-ever Potomac start for Billy Moyer Jr. of Batesville, Ark., included a heat-race spin that forced him to the rear of the field and a scary moment in the B-Main that saw a nearly baseball-size rock kick into cockpit and hit him in his helmet shield. His nose and upper lip was sore after he absorbed the blow from the rock but he was otherwise uninjured and he finished 13th in the feature. … After experiencing problems Thursday night at Delaware International, Boom Briggs of Bear Lake, Pa. (overheated after his car's radiator cap came off) and Steve Casebolt of Richmond, Ind. (undetermined engine trouble) drove their second cars Friday night. Briggs failed to qualify while Casebolt toughed out a 13th-place finish after surviving involvement in an early incident. … Jamie Lathroum of Mechanicsville, Md., brought out a caution flag on lap six of the feature when he pulled up lame behind the wheel of the Jack Bland-owned MasterSbilt No. 41, which he has begun driving in selected events.