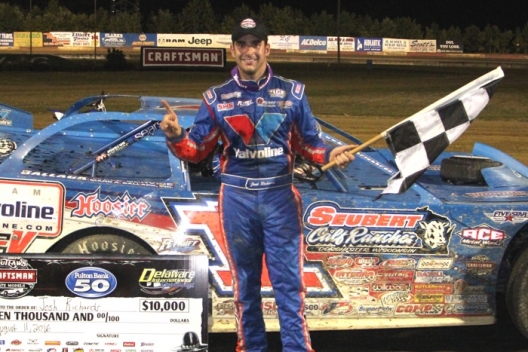 And in the process, the 28-year-old superstar made some history.

After assuming command of the feature for good on lap 10 from Amanda Whaley of Millsboro, Del. — a 21-year-old who made history as well by becoming the first female driver to lead a WoO A-Main — Richards glided away from the pack to register a $10,000 triumph that tied him with Darrell Lanigan of Union, Ky., atop the circuit’s all-time win list.

Richards’s 72nd career WoO victory was his third in a row and 14th of the season on the national tour, leaving him just three checkered flags away from matching Lanigan’s single-season WoO record of 17 wins set in 2014.

“It’s just unreal,” Richards said of his lofty win total on a series that he began running part-time as a 16-year-old in 2004. “I remember how hard it was to win the first one (on Aug. 15, 2005, at Lebanon Valley Speedway in West Lebanon, N.Y.), and everything’s that’s happened in between has been unreal. I just love to race, and to be able to have the year that we’ve had and accomplish the things we’re accomplishing is a dream come true.”

Richards dominated Delaware International’s annual WoO event for the second consecutive year in his father Mark’s Rocket Chassis house car, beating Brandon Overton of Evans, Ga., to the finish line by a commanding 4.588 seconds even after a caution flag on lap 41 wiped out his similar-sized advantage.

Reigning WoO champion Shane Clanton of Zebulon, Ga., advanced from the 10th starting spot to finish third, nearly six seconds behind Richards at the race’s conclusion. Polesitter Kenny Pettyjohn of Millsboro, Del., slipped completely out of the top five by lap 10 but rallied late in the distance when his hard-compound front tires came on and finished fourth. Whaley, who started from the outside pole, placed fifth to record the best finish by a woman driver in WoO history.

Richards wasted no time bursting to the front of the pack, hustling forward from the sixth starting spot to outduel Overton for third before a lap-eight caution flag and then surge inside Rick Eckert of York, Pa., in turn three for second on lap nine. The runaway WoO points leader proceeded to overtake Whaley for the top spot with an inside move off turn four heading to lap 10.

“I knew the way the track was that it would be beneficial to try and get up front early,” Richards said. “I knew that once it gets cleaned up it’s hard to get around the outside of somebody and with Eckert and Overton up front they wouldn’t give anything up.

“Actually, before the first caution we were kind of racing with Overton — I’d slip and he’d pass me, and then he’d slip and I passed him. Then I looked up and saw Amanda had a big lead and was just rolling really good, and at that point I didn’t really know if we had anything to win.

“But once the race got going and we were able to get by Rick there and then get by Amanda, I just tried to stay patient because I knew the track would go through a lot of changes,” he added. “We were all on relatively soft tires so it was just a matter of managing our stuff. The track got cleaned up and there might have been the verge of a little rubber there at the end, but it’s not like you were really stuck to the ground. You just had to run that one lane.”

Overton, 25, maintained firm control of second place after passing Whaley on lap 22, but the 2015 WoO rookie of the year was no match for Richards.

“That damn thing over there is so fast,” Overton said, shaking his head as he motioned toward Richards’s Rocket XR1 machine in victory lane. “We’ve all got a little bit of work to do.

“It just drives so good,” he added when asked to describe the performance of Richards’s mount. “He turns in without breaking it sideways and then he just motors away. They got it balanced. Whatever they got figured out, it ain’t like it’s got gobs of traction. It’s just that everything’s matched up. Me, I’m a little tight in and I have to slide, and that kills tires and that makes it where it don’t go fast in the end.”

Overton, who started eighth, was certainly satisfied with his runner-up finish, however.

“I thought it was gonna stay dirty, but it cleaned up and got that black groove,” said Overton, who ended the night fifth in the WoO standings, just two points behind eighth-place finisher Brian Shirley of Chatham, Ill. “I just wanted to hold onto second … and then I drove down in there like an idiot (following the final restart on lap 41) and slid up the hill, but I guess (Clanton) wasn’t close enough. I’m just glad I made it with the tire.”

The 40-year-old Clanton was also fine with his performance.

“If you would’ve told me I’d be on the podium tonight at Delaware International Speedway, I’d have said you were crazy,” Clanton said. “I hate this place. I can never qualify good, so I said I had half the field passed today when I started 10th (in the feature) instead of 16th.

“I feel like it’s a win for me. You don’t understand how bad my luck’s been here. I ain’t never had a car that you can really just race here. I could pass on the bottom and the top tonight. I wasn’t as good as them two (Richards and Overton), but I was a third place and I’m happy with that.”

Four caution flags slowed the event. Steve Casebolt of Richmond, Ind., brought out the first on lap eight when he slowed with undetermined engine problems. Subsequent cautions were caused by Eckert, who pulled up lame in turn four while running fourth on lap 21 due to a detached four-link rod; Mark Pettyjohn of Milton, Del., who stopped in turn one on lap 24; and Dale Hollidge of Mechanicsville, Md., who slowed in turn two on lap 41.

Notes: Richards pushed his huge edge in the WoO standings to 242 points (4,266-4,024) over Clanton. He needs to average a 13th-place finish over the final nine events to clinch his record fourth career championship. … Brian Shirley reported that he was feeling better after being diagnosed with strep throat on Sunday but still wasn’t 100 percent. … Jason Covert of York Haven, Pa., timed third-fastest in the first qualifying group despite completing only one lap; his car's rearend broke on his second circuit, sending him into scramble mode to replace the rear in time to start the first heat. He made it out and finished third and placed sixth in the feature. … Tyler Erb of New Waverly, Texas, failed to log a qualifying lap due to a broken driveshaft. He came back to transfer through a B-Main and finished 12th in the A-Main. … Casebolt experienced a rough night. He failed to log a qualifying lap after a power steering pump shaft broke and damaged the fuel pump, spun in his heat race and retired early from the feature due to engine trouble that his team was attempting to diagnose in the pit area afterward. … Boom Briggs of Bear Lake, Pa., was sitting in fourth place when motor trouble forced him out of the feature during a lap-21 caution period. ... Billy Moyer Jr. of Batesville, Ark., spun in turn four while running second in the fourth heat, forcing him to run a B-Main. … Missing from the field was struggling WoO regular Chase Junghans of Manhattan, Kan., who didn't make the trip east.