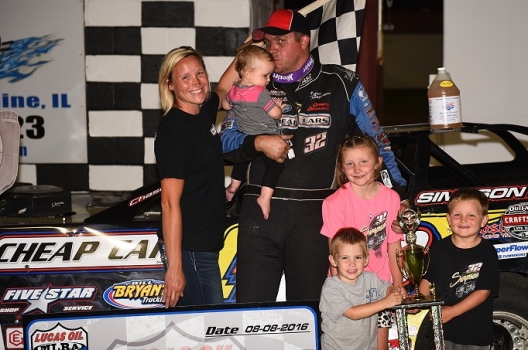 Simpson slipped past first-lap calamity, edged away from a lead-swapping duel with Jesse Stovall, then turned back late challenges from hard-charging Ryan Gustin to capture his third MLRA victory of the season and seventh of his career.

"It's been a long month,” said the 32-year-old driver. “We’ve run good and we've won races and then we've run in the back. It was a complete different setup (tonight) than what we usually run. It's cool to get $10,000 here tonight.”

The sixth-starting Simpson first took the lead from Stovall on the 17th lap, but didn’t grab the top spot for good until near the halfway point as he matched his richest career payday.

"I just kept the car straight and tried not to bend it as much as Stovall was, up there on that cushion," Simpson said. “I felt like I had a better car than him the whole race, it just took a little while for us to get going.”

Gustin, the Marshalltown, Iowa, driver who rallied from his seventh-row starting spot, finished second with Tyler Erb of New Waverly, Texas, in third. Hometown driver Jason Rauen and polesitter Mason Zeigler of Chalk Hill, Pa., rounded out the top five while Stovall, of Billings, MO., dropped out in the second half of the race with an oil leak, finishing 14th.

"We'll take it starting 14th,” Gustin said. “Chris did a good job, he's been around this place a lot, so second to him here ain't bad. Hopefully we can get one here tomorrow (at Farley’s sister track, West Liberty Raceway).”

Gustin, who broke into the top five in the first half of the race, closed within striking distance of Simpson in the final laps, but the winner slid past the slower car of Jay Johnson, completing the pass with a bold move in turn three to get a little breathing room.

“I figured (Gustin) was coming because I kept getting dirty air there in (turns) three and four, and I kept shoving the nose up off of four a little bit,” Simpson said, recalling the moment he went past Johnson. “I had to do it. It was the winning move and it could’ve been the losing move. I went in there and I must’ve bent something on the right-rear … I’m just glad we hung on. I didn’t want any more laps.”

Simpson was nearly caught up in the biggest mess of the race on the first lap when outside front-row  starter Jason Papich got sideways exiting turn two. While Simpson narrowly slipped around the outside, Papich’s car suffered heavy damage in collecting Dave Eckrich and Brent Larson with Tad Pospisil and several other drivers also getting a piece of the action.

A complete restart was required and Zeigler, making his first MLRA start, grabbed the lead at the outset and led the first nine laps before Stovall’s groove-swapping move put him out front on lap 10. Simpson followed Stovall past Zeigler amid the three-wide battle for the lead, and while Simpson led lap 17, Stovall quickly went back ahead.

Simpson again edged ahead before halfway, prior to a caution for Larson’s smoking car, and looked to take control of the race amid three mid-race yellows as Gustin began to come alive. Gustin slid in front of Stovall to take second on the 34th lap while Stovall’s car began showing smoke.

Gustin eventually tracked down Simpson, but the winner maneuvered lapped traffic late to find his way to the checkers first, less than a half-second ahead of Gustin.

The race was the first of five in six days for MLRA competitors who head to West Liberty on Tuesday and Deer Creek Speedway in Spring Valley, Minn., on Wednesday. After a day off, a doubleheader weekend is set for Friday and Saturday at Junction Motor Speedway in McCool Junction, Neb.

Notes: Simpson’s three MLRA victories have all come in his home state. He previously won at Davenport Speedway and Lee County Speedway in Donnellson. … Reigning MLRA champion Terry Phillips of Springfield, Mo., was running fourth when he ducked to the pits on the mid-race caution. He came back to finish seventh and chop 10 points off Jesse Stovall’s MLRA points lead. … Top-five finishers Tyler Erb and Mason Zeigler were competing after two weekends of Midwest action on the World of Outlaws Craftsman Late Model Series. … Billy Moyer scratched from the consolation race after an incident in his heat.