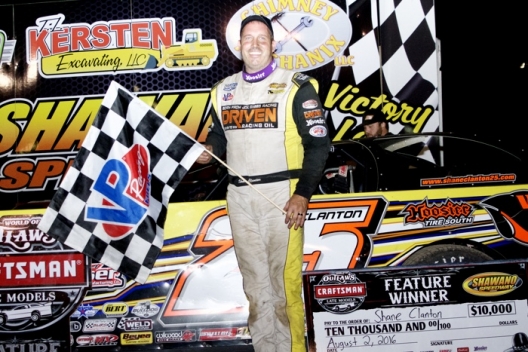 Flashing the strength that made him the 2015 WoO champion, Clanton tossed his car around the outside of turns one and two and pinned Richards behind a lapped car to immediately regain command. Clanton proceeded to dominate the remainder of the caution-free distance, racing unchallenged to capture Shawano’s WoO event for the second consecutive year.

Clanton, 40, certainly was concerned when the 28-year-old Richards suddenly surged ahead off the inside of turn four just before the race’s halfway point, but he was in the right position to fight off the national tour’s current points leader and power off to his seventh WoO triumph of the 2016 season driving his father-in-law Ron Davies’s Capital Race Car.

“I just had the top over here (in turns one and two) where I needed to be,” said Clanton, who earned $10,000. “I was just fortunate enough to be in the right place and get a run around the top to get back ahead of him.”

Richards was unable to draw closer than about five car lengths to Clanton during the race’s second half and settled for runner-up money in his Rocket Chassis house car, 2.127 seconds behind the victor at the checkered flag.

Earl Pearson Jr. of Jacksonville, Fla., was the feature’s biggest mover, advancing from the 11th starting spot to finish third in Larry Moring’s Black Diamond machine. The 44-year-old Lucas Oil Late Model Dirt Series regular was over a straightaway behind the top two cars, however, when he passed Brandon Overton of Evans, Ga., for third on lap 43 and didn’t catch a caution flag to give him a last-ditch shot at the leaders.

Overton started and finished fourth — though he ran in third place for laps 1-2 and 34-42 — and fifth place was claimed by Rick Eckert of York, Pa., who took the green flag from the pole position after the race’s scheduled polesitter, Jimmy Mars of Menomonie, Wis., had to start at the rear of the field as a penalty for changing a tire while in the staging area before the feature.

Clanton, who turned back challenges from Pearson to win last year’s WoO event at the sprawling half-mile Shawano oval, made the correct adjustments to keep Richards at bay this time.

“I didn’t know how close (Richards) was, but I seen off turn four (on lap 20) that he was real close,” Clanton said of the circuit that he lost the top spot to Richards by less than a car length. “I just knew I had to get better to leave turn four to win the race, so I just started carrying as much speed as I could through there and didn’t rely on traction.

“I thought (Richards) was gonna be all over me (after lap 20) because he caught me so fast when I had a pretty good lead, so I just wanted to get through the lapped cars the best I could in one and two and not kill too much speed in three and four where I was too tight to run the bottom. I was able to do that and we hung on.”

Richards refrained from forcing the issue to slide in front of Clanton through turns one and two after being scored the leader of lap 20. The three-time WoO champion thought he would be able to resume battling for the point with Clanton but ended up being unable to mount another serious bid.

“I could’ve got him if I really moved up when I was up beside him (in turns one and tw), but we got stuck behind (the slower Steve) Casebolt and I just kind of let (Clanton) go. I said, ‘I’ll let him have the outside,’ and I rolled back down in one and two.

“I never got that close to him again, though. We had a carburetor stumble because we adjusted on it earlier but forgot to adjust it back, and I think we could’ve still got him if it wasn’t for that.

“But he was good,” he added, “and once he gets out front on these big tracks he knows what to do to keep his speed up. I think we were just as good, if not better, as he was at times, but we just had to settle for second.”

Shawano marked the sixth straight WoO A-Main that was captured by either Clanton or Richards. Both drivers have three wins in the span.

Clanton was hopeful that his latest victory is a sign that he can keep the upper hand on Richards for the remainder of the season.

“To be the best you gotta beat the best, so hopefully we can keep going like we’re going,” said Clanton, who recorded his 37th career WoO triumph. “Josh is awful strong. His whole team is. He’s proving that my season wasn’t nothing compared to his this year, but I know we’re capable of beating him.”

Pearson was a distant third-place finisher, just over eight seconds behind Richards at the race’s conclusion. He was pleased with his performance, however.

“We worked on it there right after the heat race and got a little bit better, so we’re happy with this,” Pearson said. “It got better and better the longer we run. That bottom come to us for sure.

“We run second here last year all over Shane, and I just wish we could’ve had a caution to maybe run with him again. Once we got through the traffic they were so far gone, but our car was good.”

Notes: Overton registered his second fast-time honor of 2016. … Brian Shirley of Chatham, Ill., lost fourth place in the WoO points standings to Overton after engine problems sidelined his Bob Cullen-owned machine 19 laps into the feature. … Allen Murray of San Antonio, Texas, fielded cars for himself and Dennis Erb Jr. of Carpentersville, Ill., who drove Murray’s brand-new Black Diamond mount. Erb's car had rearend trouble in a heat and he didn't run the B-Main, but he landed a provisional starting spot for the feature and unloaded his own car to run 15 laps of the headliner. Murray, meanwhile, saw his night end after he got into the wall between turns three and four during the B-Main, extensively damaging the rearend of his car. … Steve Casebolt of Richmond, Ind., lost second place in his heat when he slapped the outside, but he repaired the right-rear bodywork damage his car sustained and transferred with a third-place finish in the B-Main. ... Nick Anvelink of Bonduel, Wis., finished one lap down in 13th place in his first start since July 2 at Shawano. He's been sidelined since then while battling disc and sciatic nerve pain in his lower back; steroid treatments and physical therapy helped him feel better. … Tyler Erb of New Waverly, Texas, was behind the wheel of the Rocket XR1 car he flipped last Saturday night at Fairbury (Ill.) American Legion Speedway after making extensive repairs. … Joey Coulter of Charlotte, N.C., used a provisional to start the A-Main after damaging the nosepiece of his car in a heat-race slap of the wall.