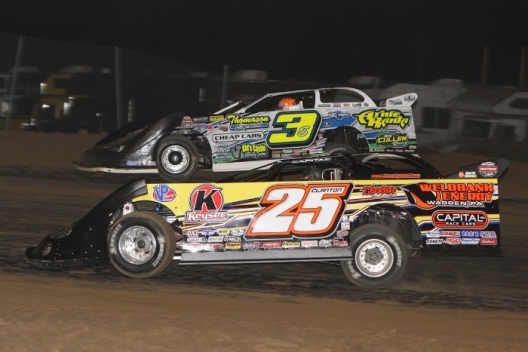 Clanton notched his 35th career series victory — fourth on the all-time list — and his sixth of the season in the weeknight affair in western Illinois.

“Our car was just excellent tonight,” Clanton said. “It went where we needed to go – top to bottom.”

Fifth-starting Rick Eckert of York, Pa., finished second with Shirley, of Chatham, Ill., settling for third. Bobby Pierce of Oakwood, Ill., and Steve Casebolt of Richmond, Ind., rounded out the top five at the 3/8-mile oval.

Though Clanton led the 24-car field to green for the Workforce 40, he didn’t lead all the way. Shirley went ahead on an early restarting, solidifying his top spot by building his momentum in the top groove while Clanton gave chase.

By lap 12, Clanton mustered up enough speed for he and Shirley to exchange the lead three times, weaving in and out and trading paint entering the frontstretch. Clanton was able to slam the door and take control with Shirley and Josh Richards in pursuit. A lap-18 caution bunched the field.

“I was just biding my time at the bottom and kept getting lower and lower,” Clanton said. “The car just kept getting better and better. Hats off to the guys who worked on the racetrack. It was really racy.”

Richards took second from Shirley on the mid-race restart, and other cautions followed, including when Shirley made contact with Richards, who spun and had to rally from the rear to finish eighth.

“The cushion was really tall and it was hard to run against it,” said Shirley, who rode the top of the track for the majority of the race. “It was one of those deals where we should’ve moved down. We just have to get a little better.

“(Richards) moved up a little bit in turn one and was already committed to the top, and I didn’t mean to get into him. Last thing I’d want to do is spin anybody out. It was my fault out there.”

Eckert took advantage, moving into second with 16 laps remaining as he tried to reel in Clanton.

Eckert made a last-ditch run at Clanton, but he couldn’t get close enough to take a serious shot at the winner.

“I got the gain on (Clanton) really hard and his tire was slowing-up a little bit,” Eckert said. “Mine was probably getting a little better. I got to thank every sponsor on this car. I’m happy.”