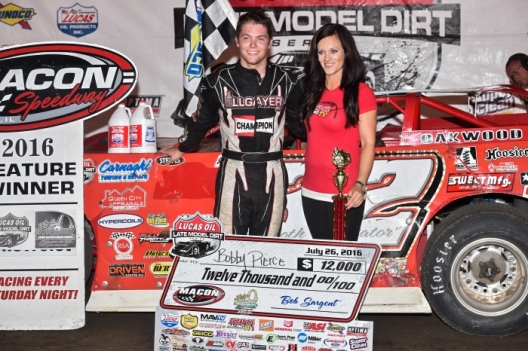 Heath Lawson/heathlawsonphotos.com
Bobby Pierce won his second Lucas Oil race at Macon.
What won the race: Perservering through a loss of power steering on the tight, fifth-mile oval, Bobby Pierce of Oakwood, Ill., turned back relentless late-race pressure from Earl Pearson Jr. of Jacksonville, Fla., and Brandon Sheppard of New Berlin, Ill., for a $12,000 victory in the Lucas Oil Late Model Dirt Series-sanctioned St. Louis U-Pic-A-Part 100. The 19-year-old was never headed after inheriting the lead when Jonathan Davenport of Blairsville, Ga., went up in smoke on lap three, but he had to battle hard to hold on for the win over Sheppard, who nipped Pearson at the line for second.
Key notes: Just 11 cars were running at the checkered flag. ... Lucas Oil regular Steve Francis, who has been sidelined since suffering a concussion in series action at Tri-City Speedway on July 15, missed Macon's action. But he reported that his doctor on Tuesday gave him the go-ahead to return to racing this weekend.
On the move: Darrell Lanigan of Union, Ky., advanced from the 17th starting spot to place fifth.
Winner's sponsors: The winning Bob Pierce Race Car is sponsored by Allgayer Inc., Premier Waste Services, Carnaghi Towing and Repair, Champion Spark Plugs, Keyser Manufacturing, Sweet Mfg., ARBodies and Petersen Aluminum.
Points chase: Despite a quiet 10th-place finish, Scott Bloomquist of Mooresburg, Tenn., extended his points, leaving Macon with 5,480 points to Davenport's 5,220.
Car count: 21
Fast qualifier: Jonathan Davenport
Time: 10.512 seconds
Polesitter: Jonathan Davenport
Heat race winners: Jonathan Davenport, Tim McCreadie, Bobby Pierce
Next series race: August 11, Florence Speedway (Union, KY) $50,000
Editor's note: Results and race details are unofficial.
From series and staff reports

The bare-bones facts of the extra-distance Lucas Oil Late Model Dirt Series event show that Bobby Pierce of Oakwood, Ill., inherited the lead when Jonathan Davenport of Blairsville, Ga., went up in smoke on lap three and paced the remainder of the distance to score a $12,000 triumph.

Pierce’s post-race appearance, however, told the real story of the frenetic affair at the high-banked, fifth-mile bullring.

After the 19-year-old sensation climbed out of his machine in victory lane and stood to answer questions from DirtonDirt.com pay-per-view broadcast reporter Ben Shelton, sweat dripped off his face and he unzipped the front of his driver’s suit. He pulled out his arms and tied the top half of his uniform around his waist, trying to cool down his body that had become overheated from his intense late-race struggle to turn back relentless challenges from Earl Pearson Jr. of Jacksonville, Fla., and Brandon Sheppard of New Berlin, Ill.

“I had no power steering I think,” Pierce said, the muscles in his arms burning more than after a vigorous weight-lifting session. “Oh, man, I was wore out at the (UMP DIRTcar) Summernationals race (Macon’s July 7 Herald & Review 100 that he won en route to his second consecutive Hell Tour points title), and this beat that. I need a water pretty bad.”

When Pierce was handed some refreshment, he realized just how tired his arms had become from wrestling his Bob Pierce Race Car around the unforgiving Macon oval.

“My grip’s so gone I can’t even open the bottle,” Pierce said with a laugh.

Pierce used up all of his strength to manhandle his car to the third Lucas Oil Series victory of his young career. He glided away to a full straightaway edge on his rivals during the race’s first half when his car was 100 percent, but after developing power-steering woes he had to hang on for dear life to stay in front.

Sheppard, 23, reached second on lap 57 and briefly threatened Pierce, but it was the 44-year-old Pearson who rose up to really put the pressure on the pacesetter. Pearson went inside Sheppard to grab second on a lap-79 restart and spent virtually every remaining circuit racing all over Pierce, at times falling just a nose-length short of leading laps.

But Pierce kept up his momentum on the outside of the track and made it to the finish line first. His final victory margin was a few car lengths over Sheppard, who ran the outside lane past Pearson on the last lap to place second by inches. Pearson settled for third place, while just a bit farther back was fourth-place finisher Don O’Neal of Martinsville, Ind., who ran second for laps 17-56 and was threatening to make the race a four-car battle for the lead before a final caution flag flew on lap 91, and O’Neal’s Clint Bowyer Racing teammate Darrell Lanigan of Union, Ky., who finished fifth after bolting on soft-compound rubber to help him advance from the 17th starting spot in his first-ever appearance at Macon.

“It was nerve-racking,” said Pierce, who captured Macon’s Lucas Oil Series event for the second time in three years. “Pearson … I saw him out of the corner of my eye every single lap the last 20 laps or whatever. He bottom-feeds like crazy, and I’m sure Sheppard was coming from the top … it was just a crazy race. I’m glad I hung on to it.”

Sheppard, who started 10th in the Best Performance Motorsports Rocket XR1 car, raced close to Pierce and Pearson over the final 21 circuits before finally finding a way to nip Pearson at the finish line for second.

“I was good on the bottom there early, but once the track started slowing down I couldn’t get around the bottom,” said Sheppard, who moved past ninth-place finisher Jared Landers of Batesville, Ark., for third in the Lucas Oil Series points standings. “My carburetor was stumbling and stuff and I was laying on the right-rear a little too much.

“We were pretty good on the cushion … I was a little bit snug (and) I was just trying not to knock the wall down too bad. But then I seen there was only nine to go (when a caution flag flew on lap 91) and I just went for it. I wanted to at least get second. I didn’t think I was gonna be able to get around Bobby because I wasn’t very good around the bottom … I just had to get up on the wheel there towards the end and get by Earl. He had a really good car … I think too much longer and a little bit slicker track, he probably would’ve won.”

Sheppard was impressed with Pierce, whom Sheppard patted on the back for toughing out a victory.

“I just heard he didn’t have power steering,” Sheppard said. “I had power steering and I’m pretty wore out, so I can’t imagine that. He did a good job.”

“I was giving it all she had on the bottom there, but I knew these guys here (Pierce and Sheppard) would be up top,” said Pearson, who recorded his third top-five finish in his last four Lucas Oil Series starts. “Hell, they grew up around him, Bobby and Brandon. I couldn’t do a slide job on them because I knew where they was gonna be at.

“I never dreamed of coming to Macon and running third, I’ll tell you that,” he added. “To come here and run second in a heat race behind T-Mac (Tim McCreadie of Watertown, N.Y.) and start fifth (in the feature) and run third and run side-by-side with the leader … you know, Bobby’s got way more laps here than I do. One thing about it, the fans just seen one heck of a show here.”

Seven caution flags slowed the event, none more notable than the first, on lap three, when Davenport slowed after heavy smoke billowed from his K&L Rumley mount as he led the way. Davenport, who started from the pole position and led laps 1-3, retired with terminal mechanical trouble.

Other caution flags flew on lap six for a Don Hammer/Daryn Klein tangle between turns one and two; lap 17 for Hammer’s spin in turn two; lap 45 when Jason Feger of Bloomington, Ill., came to a stop against the turn-two wall while running ninth; lap 54 for Lucas Oil points leader Scott Bloomquist of Mooresburg, Tenn., who stopped between turns one and two but continued to finish a quiet 10th; lap 79 for debris on the homestretch; and lap 91 for Tim McCreadie of Watertown, N.Y., who slowed with right-rear bodywork damage after having faded from his outside pole starting spot and early contention.

Shannon Babb of Moweaqua, Ill., was another notable early retiree after pulling off the track on lap 44 while running sixth due to an overheating engine.