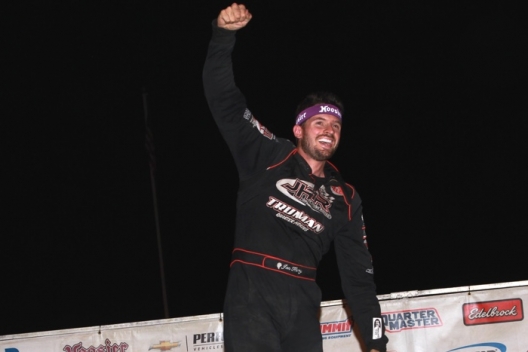 At long last grabbing the signature victory he’s craved, the 30-year-old driver completely dominated the 60-lap UMP DIRTcar Summernationals finale. He surged off the outside pole to assume command at the initial green and led the entire distance without facing a single serious challenge.

The $10,000 triumph was by far the richest of Henry’s Dirt Late Model career, which slowed in recent years as he struggled to find a car that could get his self-owned racing program purring. His biggest previous win was his only other Summernationals score, a 2012 checkered flag worth $5,000 at Spoon River Speedway in Banner, Ill.

“It’s unreal,” said Henry, who celebrated his first-ever five-figure win by doing donuts with his car in turn three before reaching victory lane and climbing out of his cockpit to the cheers of Oakshade’s packed grandstand. “It’s something I always dreamed to do … it’s very emotional, to be honest with you. It doesn’t really sink in (yet), but it’s gonna sink in probably here soon — tomorrow and the next week and the next m month — that we were able to accomplish something that we’ve always wanted to do and in front of a great crowd.”

Henry easily steered his Club 29 Race Car away from his rivals following each of the race’s three restarts. He built a full straightaway edge within a few circuits of green-flag racing before reaching lapped traffic in the final circuits cut his ultimate winning margin to a more modest 1.760 seconds over Bobby Pierce of Oakwood, Ill., who entered the event having already clinched his second straight Summernationals championship on the strength of a personal-best 10-win campaign.

Polesitter Jason Feger of Bloomington, Ill., who won his first-ever feature at Oakshade on Friday night, was outgunned for the lead at the start of the feature by Henry but ran in second place until tangling with the lapped Mason Zeigler of Chalkhill, Pa., in turn four on lap 47. Nose damage to Feger’s car left him needing wrecker service to return to the pit area.

Throughout Feger’s long stint in second place, however, he never drew close enough to Henry to make a bid for back-to-back wins. Henry was just too fast.

One month after leading nearly half of Oakshade’s Barney Oldfield Memorial race but settling for second because a scrape with a lapped car bent his car’s front end, Henry flashed even more speed at the 3/8-mile oval.

“The first night we were good too and we were coming on late,” said Henry, who finished fourth in Friday’s 40-lapper with a hard-compound tire on his car. “Tonight, I knew starting position was gonna be huge, so just getting out front and pacing myself was important. I wasn’t trying to to drive hard because this track will usually work a right-front since you’re always going in a circle and always turning, so I tried to bend the car a little bit more to keep the right-front tire from sliding and save it some.

“But I don’t even think it mattered,” he added. “This car was just so good.”

Henry had no trouble on the race’s three restarts, which followed caution flags on laps eight (for Zeigler slowing) and 47 (for the Feger/Zeigler tangle and, on the restart, a homestretch jingle involving top-10 runners Steve Kester of Holland, Ohio, Devin Moran of Dresden, Ohio, and Taylor Scheffler of Waukesha, Wis.). He powered off to a convincing triumph in a car he obtained just before last month’s Dream XXII at Eldora Speedway in Rossburg, Ohio.

“It’s been awhile,” Henry said. “We’ve had some rough last several years. We haven’t raced as much as we’ve wanted to … just everything’s been down.

“And then an opportunity arose and we got this race car that kind of fit my style and everything kind of clicked together.”

Henry was extremely gracious and emotional in his post-race comments.

“I got so many people to thank … so many people,” said Henry, who victorious on the eve of his girlfriend Toni Shreffler’s birthday. “I’m just so excited. This is just a surreal moment.

“There’s so many fans around here who have been supporting me for so many years … it’s unbelievable to win in front of this kind of a more home crowd. It’s an awesome feeling.”

The 19-year-old Pierce had an opportunity to take a shot at Henry after inheriting second place with Feger’s lap-47 trouble, but, try as he might, he had a second-place vehicle.

“His car was hooked up and I think once he got the lead he could kind of pace himself a little bit and get some clear air, but I had nothing for him,” Pierce said of Henry. “He was diving down into the corners and his car would stick, so he found something out after all the times he’s raced here. Congrats to him on the win.

“For me, (Oakshade is) not really a track that I’m good at. I guess I got a third and a second (in the weekend doubleheader), which is pretty good, but I just never feel like I’m great here. There’s always a couple guys who are faster.”

Pierce certainly excelled at most other tracks on the 2016 Summernationals, however. He became just the fifth driver in Hell Tour history to reach double figures in wins in a single season — joining luminaries Shannon Babb of Moweaqua, Ill., Scott Bloomquist of Mooresburg, Tenn., Billy Moyer of Batesville, Ark., and Don O’Neal of Martinsville, Ind. — and was the first repeat Summernationals champion since Dennis Erb Jr. of Carpentersville, Ill., won three in a row from 2007-09.

“I wanted to get that last (win) so I could be 50/50 (11 wins in 22 features), but it’s been a great Hell Tour,” Pierce said. “It’s really cool to do it again. There’s a lot of competition with this series, and venturing out to other places … not only did we win the championship, but we ran really good at a lot of tracks that I’m not really used to running at. I’m pretty proud of the team and everyone who helped us out.”

The 22-car starting field was called to the fronstretch to line up facing the outside wall and driver introductions began at 10:15 p.m., putting the start of the 60-lap Birthday Race moments away.

Bobby Pierce scored a flag-to-flag win, but Taylor Scheffler kept him in sight after grabbing second from Gordy Gundaker on lap four and crossed the finish line 1.264 seconds behind the victor. Gundaker settled for third and Rob Anderzack nipped Matt Lindsey at the finish line to take the final transfer spot. A caution flag flew on lap one when Samuel Tolley spun in turn four.

Jon Henry dominated the action, gliding away from the field to triumph by a commanding 2.877 seconds over Kent Robinson. Devin Moran finished third and Ryan Unzicker placed fourth after grabbing the position from Curtis Roberts late in the distance.

Jason Feger cruised to victory, leading the entire distance without a challenge. Steve Kester was a distant runner-up, 2.464 seconds behind Feger, while Steve Casebolt held off Brian Ruhlman to place third.

Rusty Schlenk’s race-long bids to overtake Wayne Chinn finally carried him into the lead on the final lap when he slid underneath Chinn through turns three and four and won the race drag race to the checkered flag by a mere 0.045 of a second. Matt Miller and Mason Zeigler finished third and fourth, respectively, after officials penalized them from the first to the second row after two bad initial starts. Caution flags flew on the first and fifth laps, both for Steve Miller spinning between turns three and four.

Matt Miller of Whitehouse, Ohio, was the fastest overall qualifier in the split time-trial session, turning a lap of 15.981 seconds in Group 1 to earn the pole position for the evening's first of four 10-lap heat races.

Kent Robinson of Bloomington, Ind., was quickest in Group 2 with a circuit of 15.996 seconds, earning him the pole for the third heat.

Other heat polesitters are Jason Feger of Bloomington, Ill., and Bobby Pierce of Oakwood, Ill.

Bobby Pierce of Oakwood, Ill., spent the day walking around with a smile on his face and no pressure on his shoulders. After all, with a 190-point lead over Jason Feger of Bloomington, Ill., entering tonight’s Summernationals finale, the 19-year-old sensation has already clinched his second consecutive Hell Tour title. “It’s nice to have no stress,” he said. “Last year I was pacing around here all day because I was only up a few points on (Billy) Moyer (Jr.). I like it this way a lot better.” … Pierce is one of four drivers who will finish the 22-race Summernationals with perfect attendance, joining Feger, Bob Gardner of East Peoria, Ill., and Gordy Gundaker of St. Charles, Mo. Ryan Unzicker of El Paso, Ill., missed one race, but it wasn’t be choice — hauler trouble, of course, prevented him from entering the June 19 event at Wilmot (Wis.) Raceway. … A new weekend entrant is Steve Casebolt of Richmond, Ind., who made a long overnight haul from Grand Forks, N.D., after rain washed out Friday night’s World of Outlaws Craftsman Late Model Series event at River Cities Speedway. “We left the track about 8:30 last night (CT),” said Casebolt, whose hauler had to be pulled out of the muddy River Cities pit area after showers struck after WoO qualifying. “We stopped about three hours, but other than that we drove straight through and got here about 4:30 (p.m. ET).” Casebolt did consider heading to Fairbury (Ill.) American Legion Speedway for a regular show tonight to get some laps before the track’s July 29-30 WoO Prairie Dirt Classic, but he decided en route to head to Oakshade. … Another new entrant is Mason Zeigler of Chalk Hill, Pa., who raced at Bedford (Pa.) Speedway on Friday night. … Talk about a good deal — general admission for tonight’s Birthday Day is a mere $12. Not surprisingly, a huge crowd is filling up Oakshade’s grandstand on a pleasant, partly sunny day that saw temperatures reach about 80.

The UMP DIRTcar Summernationals points race comes to an end Saturday night the annual Birthday Race at Oakshade Raceway, a series stalwart has hosted the Hell Tour every since 2000. Only once, in 2002, was the speedway’s event not the finale of the Summernationals.

Saturday night’s program will feature two split time trials with drivers in the first group vying for positions in heats 1-2 and those in the second group qualifying for spots in heats 3-4. Hot laps are scheduled to begin at 6 p.m. and racing is set to get the green flag at 7:30 p.m.