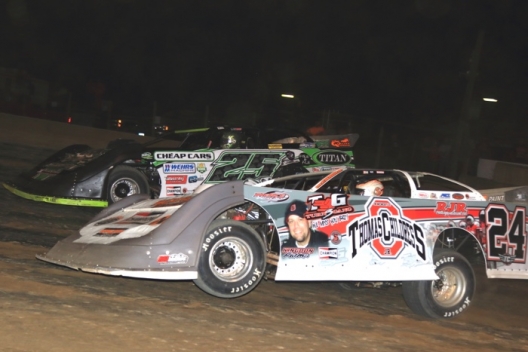 “I told him he got his (victory) last night,” Feger said of Unzicker, “so he had to share.”

Feger, 38, started from the outside pole and led all but three laps of the A-Main, but, after Unzicker nosed ahead to pace lap 15, Feger had to step up his game. The former Summernationals champion responded by tossing his Billy Moyer Victory Race Car to the outside of turns one and two to sweep past Unzicker and regain command on the 16th circuit and then turned back Unzicker's challenges over the remaining distance to triumph by a mere 0.199 of a second over his home-state rival.

The $5,000 score was Feger's third Summernationals win of 2016 — all in the last eight races. He also recorded his first-ever victory at the 3/8-mile Oakshade oval, which on Saturday night hosts the Hell Tour’s $10,000-to-win points finale for the 16th time in the last 17 years.

Bobby Pierce of Oakwood, Ill., advanced from the eighth starting spot to finish third, nipping Jon Henry of Ada, Ohio, for the podium position by barely a tenth of a second after the two driers battled hard during the final five laps. The 19-year-old Pierce’s run put the finishing touch on his second consecutive Summernationals championship, which he clinched by taking an insurmountable points lead over Feger into Saturday evening’s 60-lap Birthday Race.

Devin Moran of Dresden, Ohio, who started from the pole and led laps 1-2 before being overtaken by Feger, slipped to fifth in the final rundown.

Feger, who challenged Unzicker for the lead midway through Thursday night’s 40-lap Summernationals feature at Merritt before his softer-compound tire choice caused him to fade and finish third, had the right combination at Oakshade to stay strong from start-to-finish. But he had to find the correct line to keep Unzicker at bay.

The top of the track proved suitable for Feger after Unzicker slipped ahead at the start-finish line on lap 15, but he couldn’t pound that outside all the way to the finish.

“I knew the top was good, but it’s just a lot easier to make a mistake up there,” Feger said. “One little bobble and you can lose what you make up, and it’s a long way around up there. There wasn’t much up there and it was getting drier and skinnier, so it was getting harder and harder to run there.

“I started trying to make it work down on the bottom, crowding the bottom,” he added. “I felt like I was better up the track, but I figured, If somebody’s gonna pass me, I’m gonna make ‘em go around me on the outside.”

Unzicker, 35, opted to continue attempting to use the low groove.

“I was hunting the bottom as hard as can be,” said Unzicker, who started fourth in his Pierce Race Car. “I didn’t feel too bad in the middle or the top … my car just rotated really nice (on the inside) and hiked up through the center there and drove off. Once I went down there I was like, ‘Wow, this feels pretty good down here,’ and I just kept digging down there.”

In a race that ran uninterrupted after its only caution flag flew on lap two when Steve Kester of Holland, Ohio, was squeezed into the homestretch wall, Unzicker mounted a last-ditch bid to overtake Feger on the final lap. As Feger churned off turn four, Unzicker got as low as possible and found enough traction to pull alongside Feger as the leaders neared the finish line.

Unzicker fell just short, losing to Feger by roughly the length of a nosepiece.

“It felt like you’re pulling a parachute,” Feger said of the slow-motion nature of the race’s final 100-or-so yards. “I back-pedaled pretty hard off of four.”

Feger and Unzicker stood alongside each other in the pit area after the race and replayed their tight battle.

“One time going into (turn) three I was like, ‘Oh Jason, oh Jason, oh Jason!’ I slid in there on the bottom and I about spun him out,” Unzicker said. “But we never touched. Not once. It was a fun race.”

“It’s nice knowing that a guy’s gonna run you clean,” said Feger, who registered his 17th career Summernationals victory. “You know that even if he’s gonna come in there and slide me or something like that, you know it’s not gonna be bad or dirty. You can give each other more respect and drive a little different.”

The second straight night with Feger and Unzicker at the front of the pack continued their positive runs during the second half of the Summernationals.

“We’ve both had a really strong two weeks here,” Feger said. “We both know we got good hot rods and got some big races coming up.

“I think we both kind of hit our stride here. I think it would be a whole different Summernationals if we could start over again. Bobby (Pierce), of course, would still be strong, but we’ve both shown more consistency. We’ve both hit on something that’s got us more in the ballpark every night.”

Pierce wasn’t quite able to match the speed of the race’s top-two finishers. He hustled forward to third by lap 16 and appeared primed to bid for his 11th Hell Tour triumph of 2016, but after making slight contact with Unzicker on lap 22 and losing substantial ground he didn’t seriously threaten the leaders again.

“The middle was really good in (turns) one and two, and then all of a sudden it started changing around,” Pierce said. “The top came in a little bit, and then the bottom against the tires came in a lot but then it kind of went away. I think tire selection, just like last night, came into play a lot tonight.”

Pierce was nonetheless pleased with his third-place finish and expressed relief that, with the Summernationals title in hand, he didn’t face the stress that he did in last year’s Birthday Race when he found himself in tight race for the championship with Billy Moyer Jr. of Batesville, Ark.

“This year, at this race, compared to last year, it’s just completely different,” Pierce said of his mental state at Oakshade. “Last year I just remember pacing around, thinking not to make any mistakes. We won by 10 points last year and this year we’ve got a (big) lead so … no pressure.”

Devin Moran led all the way, beating Bobby Pierce to the finish line by 1.618 seconds. Pierce overtook Matt Miller for second on lap four; Miller settled for third place and Gordy Gundaker placed fourth. The race’s lone caution flag flew on lap three when Dusty Moore spun on the inside of turn four.

Jason Feger led every lap, driving away to defeat Kent Robinson by a half-straightaway. Jeep Van Wormer battled past Mike Benedum and Rusty Schlenk midway through the race to grab third and finish there and Schlenk placed fourth. A caution flag flew on lap one for a multi-car tangle in turn two that left Curtis Deisenroth and Matt Lindsey spun around and Ron Miller and Hillard Miller with damage.

Jon Henry cruised away from the pack, leading from flag-to-flag and beating Brian Ruhlman by 2.257 seconds. Devin Shiels held off Brad Eitniear to finish third.

Ryan Unzicker surged into the lead at the initial green flag and never looked back en route to winning by 3.345 seconds over Mike Bores. Polesitter Taylor Scheffler and Larry Kingseed also transferred. A caution flag flew on lap two for Brian O'Brien's spin between turns three and four.

Making his first-ever appearance at Oakshade, Kent Robinson of Bloomington, Ind., ripped off the overall fastest lap of the 50-car qualifing session. His circuit of 15.577 seconds topped the second group and put him on the pole position of the evening's fourth heat.

Taylor Scheffler of Waukesha, Wis. — another driver making his first career visit to Oakshade — was fastest in the first group with a lap of 15.682 seconds. He was a mere 3/10,000ths of a second faster than Brian Ruhlman of Clarklake, Mich., who joins Scheffler as a heat-race polesitter.

Matt Miller of Whitehouse, Ohio, who won Oakshade’s Birthday Race in both 2013 and ’14, will make his first start with car owner Rick DeLong since his Dream weekend at Eldora Speedway last month ended early with a hard, chassis-bending crash in a preliminary night heat race. DeLong has prepared a one-year-old Rocket machine for Miller to chase Oakshade glory. “I had to take his favorite seat out of the other (wrecked) car and put it in this one,” DeLong said with a smile. “I hope it’s in there right or I might get yelled at.” … Jon Henry of Ada, Ohio, has high hopes for Oakshade’s doubleheader. “I’m really excited for this weekend,” said Henry, who has made four starts since debuting a former Frank Heckenast Jr.-driven Club 29 Race Car with a successful outing in last month’s Dream. “We were really good here last month (when he finished second in the June 18 Barney Oldfield Memorial). We were leading until I got into a lapped car and bent the front end.” … Kent Robinson of Bloomington, Ind., is anxious to make his first-ever laps at Oakshade. “I’ve always wanted to race here,” said Robinson, who will make his second start in his new Billy Moyer Victory Race Car. “It’s always looked like a neat place to me.” … Coming off a victory in Thursday night’s Summernationals event at Merritt Speedway in Lake City, Mich., Ryan Unzicker of El Paso, Ill., has new doors on his car sporting an Ohio State University-themed wrap honoring the memory of the late Thomas Childress, a fan of Unzicker’s who was part of Oakshade’s Turn 3 Gang. … Taylor Scheffler of Waukesha, Wis., is in Oakshade’s field after registering a career-best Summernationals finish of fourth Thursday night at Merritt. The 22-year-old sophomore Dirt Late Model driver is set to make just his seventh career Super Late Model start; his uncle, veteran Wisconsin racer Russ Scheffler, has allowed him to use his hauler and Wild Inc. Race Car to make his full-blown Dirt Late Model debut in Summernationals events over the past month. … Late arrivals to Oakshade’s pit area were 2007 Birthday Race winner Jeep VanWormer of Pinioning, Mich., and Devin Moran of Dresden, Ohio. Both drivers pulled into the pit area at 5:20 p.m. ... Gordy Gundaker's parents, Kevin and Tammy, traveled with their son to the rained-out Indiana races and Thursday night's show in Michigan, but they rented a car and drove home today to oversee this evening's Lucas Oil Late Model Dirt Series event at their Tri-City Speedway in Granite City, Ill.

The UMP DIRTcar Summernationals plunges into its last weekend of points racing with a two-day program at Oakshade Raceway, a series stalwart that will host a pair of complete Hell Tour events for the first time. Friday night’s $5,000-to-win show leads into Saturday evening’s traditional 60-lap Birthday Race that boasts a $10,000 top prize.

Friday night’s program will feature two split time trials with drivers in the first group vying for positions in heats 1-2 and those in the second group qualifying for spots in heats 3-4. Hot laps are scheduled to begin at 6 p.m. and racing is set to get the green flag at 7:30 p.m.