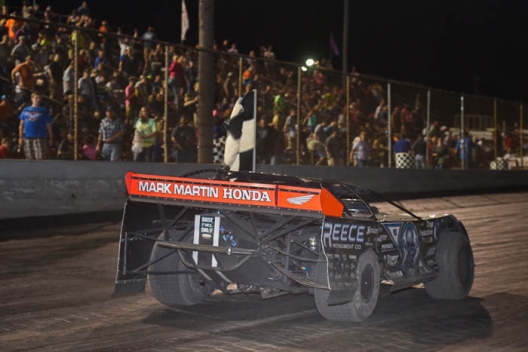 But to emerge victorious for the fourth time in his last five starts at the Kevin and Tammy Gundaker-promoted oval, the 52-year-old Hall of Famer had to pull off some late-race dramatics on a demanding surface that was left rough after several days of heavy rain in the days leading up to the event.

Bloomquist spent the first half of the race battling for second with fellow Dirt Late Model legend Billy Moyer of Batesville, Ark., and after finally securing the spot Bloomquist found the very fleet Earl Pearson Jr. of Jacksonville, Fla., standing between him and yet another checkered flag. Pearson maintained control of the feature until he pushed up the track in turn two while attempting to lap Dewayne Kiefer of Bloomsdale, Mo., on lap 47, allowing Bloomquist to vault his Sweet-Bloomquist machine through the open door on the bottom and bolt to his series-leading ninth triumph of the season.

Pearson settled for a runner-up finish — 2.360 seconds behind Bloomquist — after leading the race’s first 46 laps in the Dunn-Benson Racing Longhorn Race Car. He fell short of breaking a 14-month Lucas Oil Series winless streak but matched his best finish of the 2016 tour, on April 16 at Batesville Motor Speedway in Locust Grove, Ark.

Don O’Neal of Martinsville, Ind., debuted a new Clint Bowyer Racing Club 29 Race Car and drove it to a third-place finish, pulling off a last-lap pass of Brandon Sheppard to nip the New Berlin, Ill., at the finish line by a mere 0.104 of a second. Dennis Erb Jr. of Carpentersville, Ill., completed the top five.

“Earl was pretty good tonight,” said Bloomquist, who extended his lead in the Lucas Oil Series points standings to 295 points over sixth-place finisher Jonathan Davenport of Blairsville, Ga. “He’d make a few mistakes and push in the corner and leave us a little bit of a hole, but I just couldn’t get quite enough run.

“I started moving around a little bit and I knew it was getting close to the end there and we had to get something done, but the lapped car kind of gave us a little bit of an advantage. We were catching him anyway, but I don’t know if we could’ve got it done or not without the lapped car.”

Pearson, who started on the pole, made no excuses for his late-race loss to Bloomquist. He simply wasn’t maneuverable enough to deal with Kiefer’s slower car when he came upon him.

“I couldn’t get off the bottom,” said Pearson, who was bidding for his first Lucas Oil Series victory since May 15, 2015, at Oshkosh (Wis.) Speedzone Raceway. “I just run right around the bottom … it’s all I could do. It’s a good night for us as far as points (he moved to 10th in the standings), but we ain’t won one all year and we surely wanted to win that one.

“We just got behind that lapped car and I couldn’t do anything. I just had to marry myself to the bottom … when I moved up I was terrible.

“We’ve just got to go back and do our homework,” he added. “He was sitting in the right spot. He was waiting on me to make that mistake, and I made it with three laps to go and that was all she wrote.”

Pearson was disappointed to see his slump continue, but his solid performance was still encouraging.

“As many as he’s won this year and just three laps to go and lose it that way, it’s heartbreaking,” Pearson said. “But that’s racing.”

Four caution flags slowed the feature, the most serious coming on lap 27 when Steve Francis of Bowling Green, Ky., slammed the turn-two wall after apparently being knocked unconscious momentarily by a blow to his helmet that he believed was from a piece of lead that flew into his cockpit. He regained consciousness and was transported to a nearby hospital for tests and observation; as of Saturday morning it appeared that his most serious injuries were a broken nose and a moderate concussion. | DirtWire

Other caution flags flew on lap 22 for Jimmy Owens of Newport, Tenn., and Chris Simpson of Oxford, Iowa, and on lap 30 for Darrell Lanigan of Union, Ky.

Jared Landers of Batesville, Ark., escaped injury when his car bicycled into turn three during time trials and flipped wildly. He pulled out a backup car and finished eighth after using a provisional to start 23rd.