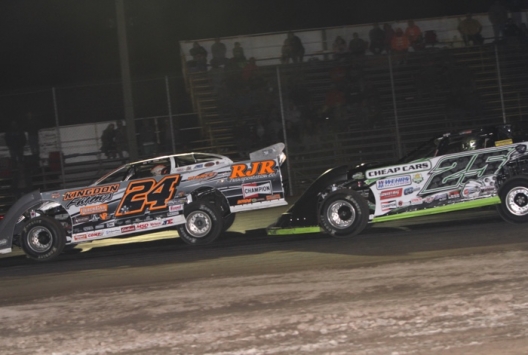 LAKE CITY, Mich. (July 14) — Ryan Unzicker of El Paso, Ill., might have led Thursday night’s 40-lap UMP DIRTcar Summernationals feature at Merritt Speedway from flag-to-flag, but his march to the $5,000 top prize was no easy task.

Thanks to Jason Feger of Bloomington, Ill., Unzicker had to break a serious sweat to secure his second Hell Tour triumph of the 2016 season.

With the race running caution-free for the final 38 circuits, Unzicker found himself embroiled in heavy traffic at the midway point. At the same time he had to deal with heavy pressure from Feger, who used the outside groove to slide forward from the fourth starting spot to second by lap eight.

Feger managed to pull to Unzicker’s inside on lap 24 and two circuits later drew to the outside of the leader. But Unzicker managed to turn back Feger’s bids and, after clearing slower traffic on lap 31, pulled away to capture the first-ever Summernationals event at Merritt.

Bobby Pierce of Oakwood, Ill., who started alongside the polesitting Unzicker but slipped back to fifth place early in the A-Main, rallied late to grab second place from Feger on lap 38 and crossed the finish line 1.770 seconds behind Unzicker.

Unzicker, 35, was victorious for the first time since the June 28 event at Clarksville (Tenn.) Speedway and gave his program a much-needed boost after absorbing back-to-back rainouts to start the Hell Tour’s final week of action.

“It’s nice to have a couple days off, but we’re out here in the middle of nowhere and there’s nothing to do so we want to race and recoup some money,” said Unzicker, who registered his ninth career Summernationals triumph. “This really helps. My (crew) guys said, ‘Man, we really need to just get one more before we go home,’ and it worked out perfectly tonight drawing the one for the starting position.

“But our car was good anyway. Who knows what would’ve happened (if he had started deeper in the field), but we made the right adjustments and made the right tire call and we got a win.

Feger, 38, threw a scare at Unzicker, however. A winner twice in the last six Summernationals events before Merritt, made a higher line work early in the fray, sliding past Pierce for third on lap four and Scheffler for second on lap eight.

Unzicker, who made his first career start at Merritt, had an inkling that someone might find a fast route off the bottom of the quarter-mile oval.

“I told my guys (before the race), ‘The track’s cleaning up and a guy could roll me in the middle if some lapped cars are hanging me up in the bottom, so let me know when that happens,’” said Unzicker, who used the same Pierce Race Car and Pro Power engine that he’s entered in all of his ’16 Summernationals starts. “My guy with the (signal) sticks started showing me there was a guy coming in the middle, and I looked up at the (position) board and seen the 25 (Feger) so I just moved up in that lane.

“I felt OK up there … we ran 10 or so laps up there, but it wasn’t what I was looking for. Then my stick guy showed me I was still OK, so I moved back down and found some more traction coming off of that left-rear. Once we moved back down to the bottom we felt good … that was our special line I think.”

Unzicker hung tough in his preferred groove when Feger made his two strong bids.

“They said he had a 30 (compound Hoosier tire) on so he might have worn his tire out. We had a (harder) 40 on. Maybe if he had a 40 on he might’ve walked away from us, but our car was good and we made the right choices so that’s all I can say.

“We’ve made some wrong tire choices in some of these races lately,” he added, “so it feels good make the right choice for once.”

Feger conceded that he miscalculated with his tire selection.

“The car was really good early,” said Feger, who had previously raced at Merritt in World of Outlaws Craftsman Late Model Series action. “I went a little bit softer on tires than Pierce and Unzicker, and the last 10, 15 (laps) I could feel it … I just lost the drive and sidebite I had before.

“I think if I’d have went harder on tire we probably could’ve done just as good and probably stayed up there. Just as I passed Ryan, he took off and I was doing the backstroke there a little bit and was just holding on. I couldn’t run the line that I was running before. We just picked on the wrong tire. That’s how it goes sometimes.”

The 19-year-old Pierce took advantage of Feger’s fading Billy Moyer Victory Race Car to snatch the runner-up spot with two laps remaining. It was a solid end to a race that began in frustrating fashion for the runaway Summernationals points leader.

“We just couldn’t take off on the start,” Pierce said. “I honestly don’t know what it was … maybe just clean racetrack. I tried to get down but just couldn’t. I was getting passed on the outside, the inside, and then all of a sudden the car just came to life (later in the race).

“I think tire choice came into play tonight a lot. It’s just a real tricky racetrack. It’s got to be one of the slickest racetracks I’ve been to in a while.

“I’ll take second,” he added. “With Ryan winning the race (in a Pierce car), it’s really cool, too.”

The feature’s only caution flag flew on lap two for Curt Spalding of Hartford, Mich., who was left sitting spun out in the second turn. Bob Gardner of East Peoria, Ill., was also involved and had to restart at the rear.

Reigning Merritt champion and current points leader Eric Spangler of Lake City, Mich., was an early retiree. He was running inside the top 10 when he pulled off on lap 16 with his car smoking from a busted oil line.

Taylor Scheffler dominated the action, leading all the way in a race slowed by a single caution flag on lap seven for John Hittle's turn-four spin. Scheffler crossed the finish line 1.647 seconds ahead of Ryan VanderVeen, with Eric Spangler and Bobby Timmer also transferring.

Outside polesitter Ryan Unzicker outgunned Gordy Gundaker for the lead at the initial green flag and marched away to defeat his fellow Summernationals regular by 2.136 seconds. Nick Kurtz and Garrett Wiles finished third and fourth, respectively.

Jason Feger led all the way but had to turn back a late challenge from Curt Spalding to triumph by 1.029 seconds. Rich Neiser finished a close third and Sam Epling was fourth. A caution flag flew on lap one when Brian Abernethy slid off the track in turns one and two.

Bobby Pierce cruised to victory in the caution-free opening prelim, beating Travis Stemler to the finish line by a half-straightaway. Bob Gardner wrestled third place early in the distance and finished there and Chad Foster came from sixth to claim the final transfer spot.

Bobby Pierce of Oakwood, Ill., was the overall fastest qualifiers among 34 entrants, turning a lap of 14.700 seconds in the first group to earn the pole position for the first of four 10-lap heat races.

Gordy Gundaker of St. Charles, Mo., was quickest in the second group with a lap of 15.007 seconds, putting him on the pole of the third heat.

Other heat polesitters are Jason Feger of Bloomington, Ill, and Taylor Scheffler of Waukesha, Wis.

Mother Nature appears to finally be cutting the UMP DIRTcar Summernationals a break after consecutive rainouts in Indiana. While the northern Michigan skies have clouded up, sun has periodically peaked through and no threat of rain is showing on radar. Temperatures in the 70s with a stiff breeze are also giving teams and officials a refreshing break from the usual hot summer conditions. … After installing a new set of valve springs in his Pro Power engine for the final week of the Summernationals, Ryan Unzicker of El Paso, Ill., isn’t happy about two straight rainouts preventing him from earning back some of the cash he invested in his powerplant upgrade. What’s more, off nights on the road can cost a driver even more money with dinners out for the crew, beer purchases and the biggest dollar-eater: a trip to a casino. Unzicker did stop at a casino with some other teams after Wednesday night’s cancelation, but he refrained from gambling to save some bucks. “They had a room of ‘big-kid’ games (video games, etc.), so we just went and played them for a little bit,” he said with a smile. … No driver is more pumped for competition at Merritt than Eric Spangler of Lake City, Mich., the defending and multi-time track champion and current Dirt Late Model points leader. With the Summernationals program kicking off a huge three-day weekend at Merritt — the oval’s annual Wood Tic event includes qualifying on Friday night and the $5,000-to-win feature on Saturday — Spangler is plunging into his biggest racing weekend of the season. Spangler, who lives just over 10 minutes from the track, has come close to a major touring season win on his home turf; in 2013 he finished second in a WoO 50-lapper by a 0.101 of a second to Tim Fuller as he slipped over the track’s homestretch berm in an attempt to pull of a dramatic victory. (Fruitport, Mich.’s Rich Neiser, who is also in tonight’s field, finished third in that ’13 WoO feature, just 0.234 of second behind Fuller in a thrilling three-abreast finish.) … Veteran racer Sam Epling of Perry, Mich., who in recent years has provided pit assistance to Tim McCreadie of Watertown, N.Y., at selected special events (including this year’s Georgia-Florida Speedweeks), is in Merritt’s field with MasterSbilt car that Devin Moran of Dresden, Ohio, drove in 2015. “Donnie (Moran) gave me (setup) notes for this car,” said Epling, who has made about a half-dozen starts this season. “Everything he said to do is on it tonight, so we’ll see how it goes.” … There’s a healthy contingent of RVs in Merritt’s parking lot, which shouldn’t be a surprise. The track’s Wood Tic weekend traditionally draws a big turnout of campers. “It’s like a mini-Eldora here for this weekend,” said Epling, who is sticking around to run the Wood Tic. “I remember the first time I came here for this weekend and saw all the campers … I was like, ‘This is a pretty big deal.’ They have a DJ after the races Friday, everybody cooks out … it’s a good time.” … You can’t beat the affordability of Merritt’s Wood Tic weekend admission prices. G.A. for tonight’s Summernationals show is just $15 for adults, and a three-day grandstand pass is just $30.

After a three-day break — for a scheduled off day Monday and back-to-back rainouts Tuesday at Plymouth (Ind.) Speedway and Wednesday at Shadyhill Speedway in Medaryville, Ind. — the UMP DIRTcar Summernationals will attempt to resume with Round 20 of the series at Merritt Speedway.

The Hell Tour makes it first-ever stop at Merritt, a quarter-mile oval in northern Michigan that carries a UMP DIRTcar sanction for its weekly Dirt Late Model action. The track has also hosted World of Outlaws Craftsman Late Model Series events (annually from 2011-14) and is bringing the national tour back this year for an Aug. 26-27 doubleheader.

Merritt is just the third track in Michigan to hold a Summernationals event in the circuit's three-decade-long history. I-96 Speedway in Lake Odessa has run six Hell Tour features (2005, 2010-14) and Hartford Motor Speedway has had three races (2002, 2005-06).

Thursday night’s program will likely include two qualifying groups, with the first time-trialing to align heats 1-2 and the second setting up heats 3-4. Hot laps are scheduled to begin at 6:30 p.m.