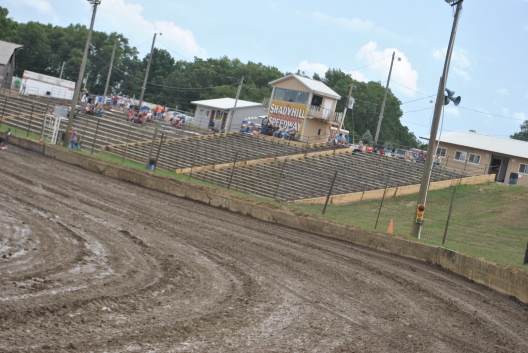 Kevin Kovac/DirtonDirt.com
Shadyhill Speedway hosts the Summernationals for the first time since 2000.
Key notes: The Summernationals returns to Shadyhill for the first time since July 4, 2000, when Bob Pierce — the father and car owner of current series points leader Bobby Pierce — was victorious in the only Hell Tour event the track has hosted. ... The event is the 20th of the 2016 series; three more points races remain to close out the schedule. ... Tuesday night's Summernationals stop at Indiana's Plymouth Speedway was rained out.
Who to watch: Jason Feger of Bloomington, Ill., who will shoot for his third win in the last seven Summernationals events.
Points chase: Bobby Pierce of Oakwood, Ill., has 1,293 points to comfortably lead Jason Feger of Bloomington, Ill. (1,098) and Ryan Unzicker of El Paso, Ill. (1,020).
Current weather: Cloudy with Thunderstorms, 70°F
Car count: 18
Next series race: July 14, Merritt Speedway (Lake City, MI) $5,000
Editor's note: Results and race details are unofficial.
By Kevin Kovac
DirtonDirt.com senior writer

With the track surface not yet ready at the scheduled 6:30 p.m. start time for hot laps, strong storms began to close in on the area. Teams began loading up rather than roll onto the quarter-mile oval to run it in, and officials ultimately announced the cancelation of the program because a severe thunderstorm warning had been posted with heavy rain and wind expected to arrive within a half-hour.

The event, which was to be the first Summernationals stop at Shadyhill since 2000, will not be rescheduled.

After consecutive Indiana rainouts at Plymouth Speedway and Shadyhill, the Hell Tour moves to its conclusion with events Thursday night at Merritt Raceway in Lake City, Mich., and Friday and Saturday at Oakshade Speedway in Wauseon, Ohio.

Temperatures are near 90 and there’s a threat of thunderstorms that becomes greater as the evening progresses; no rain has fallen during the day, but the track surface was watered heavily and was not ready for hot laps to begin as scheduled at 6:30 p.m. ET, putting the program behind schedule as a water truck and tractor circled the quarter-mile attempting to run in the surface. ... Officials did say that the Dirt Late Model feature will be moved to first on the program in an effort to beat approaching thunderstorms. ... Summernationals points leader Bobby Pierce’s father, Bob, won the only previous Hell Tour event at Shadyhill in 2000 and remembers some details of that evening — including the fact that he thought it was going to be rained out and was about “crack open a beer” when he realized that officials were going ahead with the show — but he doesn’t have any setup notes from the race. He keeps a detailed notebook of setup specifications he uses, but the records he has along with him dating back to the late ‘90s don’t include anything of Shadyhill. “I looked through everything I’ve got but I can’t find any notes,” he said. … Jason Feger of Bloomington, Ill., whose two Summernationals wins this year have come in the last six events, will make his first-ever start at Shadyhill. He recalls, however, accompanying fellow Bloomington driver Billy Drake to a Dirt Late Model event at the track years ago. “It might have been that Summernationals race,” he said. … UMP DIRTcar weekly series national points leader McKay Wenger of Fairbury, Ill., is in Wednesday night’s field. … Bob Gardner of East Peoria, Ill., who said Shadyhill reminds him of his hometown’s Peoria Speedway, is hoping to close his first full tour of duty on the Summernationals with a strong final four nights of action. He will be back in his own No. 4 after running his brother John Gardner Jr.’s machine in Sunday night’s event at Quincy (Ill.) Raceway because problems with his trailer’s liftgate left him unable to unload his Longhorn mount. He finally got the liftgate problems fixed at 11:30 a.m. Tuesday and worked on his car for the first time since Saturday in the Plymouth Speedway pit area before rain washed out Tuesday evening’s program. … Summernationals announcer Rick Eshelman will not only announce at the 199th different track of his career tonight; he’ll also experience another first-time occurrence when he shares the microphone with a female announcer for the first time in his long career. Brandi Page is in her fourth year as Shadyhill’s announcer. Page said the fans have gradually gotten used to a female voice calling the action. “Two years ago I had an old guy come up to me and say, ‘You do a pretty good job for a girl,’” she said with a laugh. “I said, ‘I’ll take that!’”

After a two-day break — for a scheduled off day Monday and a rainout Tuesday at Plymouth (Ind.) Speedway — the UMP DIRTcar Summernationals returns to action Wednesday night with Round 20 of the series at Shadyhill Speedway.

UMP modifieds headline the weekly programs at the quarter-mile, which rarely hosts Dirt Late Model events. In fact, tonight’s show will mark just the second Summernationals race at Shadyhill; the first, on July 4, 2000, was won by Bob Pierce, the father and car owner of current Summernationals points leader Bobby Pierce.

DirtonDirt.com records indicate that UMP DIRTcar sanctioned two series events at Shadyhill in the ‘90s, both part of the UMP Outlaw Nationals that ran from 1995-98. Dan Sturgeon of Bedford, Ind., was victorious in the 1997 feature and Kevin Weaver of Gibson City won the ’98 race.

Wednesday night’s program will likely include group qualifying, three heats and a last-chance race leading into a 40-lap feature paying $5,000 to win. Hot laps are scheduled to begin at 6:30 ET.