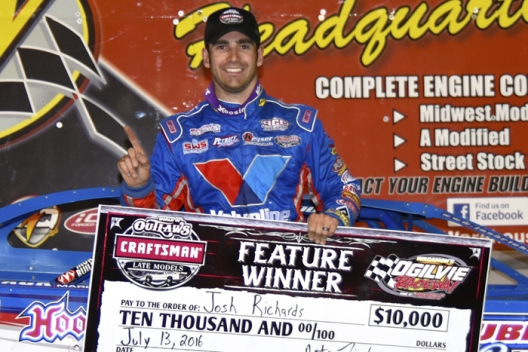 “It was tough, Ill tell you,” said Richards, who did his best to make it look easy. “I want to thank the track guys. It's a beautiful facility and I wasn't expecting it to be this nice. Its a great place to come. I didn't think we'd have 10 (victories) this year and this early.”

Richards built leads of as large as eight seconds in racing to victory over reigning series champion and ninth-starting Shane Clanton of Zebulon, Ga. Steve Casebolt of Richmond, Ind., was third followed by Eric Wells of Hazard, Ky., and Brandon Overton of Appling, Ga.

Richards, who led the field into the green flag for 50 laps, never lost his top spot. Within the first 10 laps, Richards widened the gap between his Rocket Chassis house car and the field.

On lap nine, Richards had already caught the tail of the field, but the race’s first caution gave him clear racetrack.

On the restart, Rookie of the Year contender Tyler Erb of New Waverly, Texas, took the highest line on the 3/8-mile oval, taking the second spot from Eric Wells while Richards again pulled away, leading by 3.66 seconds after 15 circuits.

While Richards maintained his lead spot after a lap-17 caution, the rest of the top five shuffled while Clanton began heading for the front, eventually reaching the second spot. He got within a few seconds of Richards, but Richards rebuilt his margin to more than four seconds with 14 laps remaining.

Richards continued stretching his lead, extending it to more than six seconds while enjoying a cushion of five lapped cars between his No. 1 and Clanton’s No. 25. By the time the final caution appeared on lap 44, Richards led by eighth seconds and nothing much changed over the final six circuits.

“I knew Shane was really good, and I knew he started back and he made me worry a little bit,” Richards said.  “My guys were telling me to go all over the place, so I just tried to get back into a rhythm. It had grip in places but it was hard to get a consistent feel. That last restart I thought hed get a pretty good shot at it. I just tried to stay smooth the best I could.”

“Overall, we had a pretty good night,” Clanton said. “Well (the Rocket Chassis house car team) got their program turned around from last year. They're way more consistent than we are with wins. We've run top-five and second to him, but hopefully we can turn it around tomorrow night (at Hibbing, Minn.), we win and he gets second.”

Casebolt won a dogfight with Wells and Overton to secure the third spot and his fourth top-five finish of the season.

“It's been awhile,” Casebolt said grinning. “I guess we're not totally washed up. Eric and I swapped spots a couple times, and he's really improved a ton. I asked him at the draw what he's doing different with his life that I need to take advantage of for myself. He wouldn't tell me. It's special to get a podium. We just need to win.”