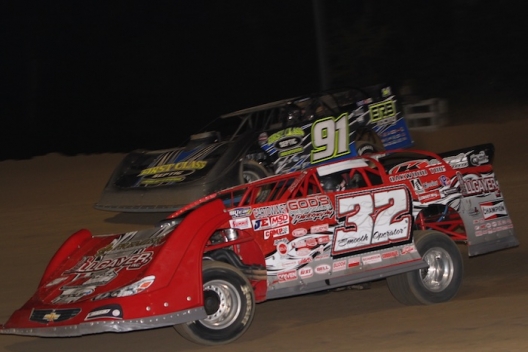 Pierce’s smooth, steady approach to the recently rebanked Quincy Raceway vs. Erb’s frenetic groove-swapping charges proved to be the difference as the series points leader from Oakwood, Ill., earned $5,000 and his 10th victory in 19 series races.

Pierce got the lead in turn two on the first lap when the polesitting Erb charged the corner too hard and slid up the track. Erb, of New Waverly, Texas, challenged Pierce on the high side for several laps — and both frontrunning teens survived a scare when a slower car spun in front of them on lap 13 — but the reigning tour champion pulled away late to win by nearly 2.5 seconds.

“It was a different Quincy Raceway tonight … they kind of refigured the racetrack and made it a lot less banked. It was really bottom dominant,” Pierce said. “When we took the lead that early, I was like, ‘All right, just settle down here and try to find a smooth line around the racetrack.’ And then once we kind of got rolling there … it got pretty simple to just stay down there and try not to make a little mistake, and it worked out for us.”

Erb, who headed to Quincy following a sixth-place finish the previous night in World of Outlaws Craftsman Late Model Series action at Spring Valley, Minn., finished second with Michael Kloos of Trenton, Ill., in third. Ryan Unzicker of El Paso, Ill., and home-track driver Dustin Griffin of Camp Point, Ill., rounded out the top five on an evening when rain threatened to cancel the racing altogether.

Erb beat Pierce into turn one on the opening lap, but when the young Texan’s car washed up the banking in turn two, Pierce rolled past.

“He had a really fast race car and I think on that first corner he just made a little mistake,” Pierce said. “I got under him there, and he almost battled back for the lead, but I think the top just kind of went away a little bit.”

Erb actually tried a groove-swapping move on the fourth lap, diving low in turn one and making contact with Pierce. Both drivers managed to keep the handle on their cars.

“I hit him once early,” Erb said. “I didn’t mean to, it was just kind of slick down there.”

Erb recovered and was back in second by the fifth lap and was staying in touch with the leader amid traffic when Bo Brockway spun out of a turn-one pack just in front of Pierce and Erb on lap 13. Evading Brockway’s car, the frontrunners skittered over the banking with Erb spinning, but officials restored them to their first and second positions for the restart.

“That was really crazy,” Pierce said. “It was literally right in front of me. The only thing I could was just turn right and went shooting off the banking. I’m just glad we didn’t get into him and everything turned out all right.”

Erb was relieved to get his spot back.

“Those lapped cars were bottling him up and it was about to get pretty hairy,” Erb said “And then that guy spun going into (turn) one, and I was just glad we were able to make it through that. It was definitely getting close, and I think we might’ve had something for him there. But just once we got stretched out, I couldn’t really catch him enough and be consistent on the top to stay with him.”

After the restart, Kloos got rolling in the low groove and dropped Erb to the third spot, closing in on Pierce before the second and final caution of the race flew on lap 20 for a slowing Gordy Gundaker.

Kloos nosed in on Pierce a few times after the midway restart, but the winner began stretching his lead as Erb briefly slipped back to fourth behind Unzicker. Erb got rolling again up high and moved past Kloos and Unzicker to regain second on lap 25, but he couldn’t gain any ground on Pierce over the final 15 laps.

“I just needed to get in front of Bobby sooner,” Erb said. “I couldn’t get it done and he won another one, that’s all there is to it.”

Pierce’s march toward his second straight championship — he’s nearly 200 points ahead of his closest pursuer in the title chase, Jason Feger — could be a march toward making more history with five series races remaining.

The series takes its final day off Monday before heading into the final week, which starts Tuesday with the tour’s first-ever visit to Plymouth (Ind.) Speedway.

Polesitter Bobby Pierce cruised to a 10-lap victory fourth-starting Justin Reed took second early and held that spot the rest of the way. Outside front-row starter Jason Perry was third with John Gardner Jr. in fourth. Rusty Griffaw and a distant Terry Wilson for the fifth and sixth spots. The first start was called back.

Ryan Unzicker raced to a 10-lap victory in the second heat, drawing away from Bob Gardner without a challenge to win by nearly a straightaway. Gardner fought off early challenges from Gordy Gundaker to get second while Clint Kirkham nearly took the third spot from Gundaker before settling for fourth. Mark Burgtorf was fifth and Bo Brockway retired on the last lap.

Polesitter Tyler Erb edged away on the first lap and cruised to a 10-lap victory, half-tracking everyone but runner-up Michael Kloos, ran alone in second most of the way. Dustin Griffin was third, just ahead of Denny Woodworth and Brian Diveley while Jason Feger — second in series points — was the last car running. Cliff Powell pulled to the infield at halfway. The first start was called back.

Series points leader Bobby Pierce, the only driver to crack the 13-second mark, topped 19 qualifiers Sunday at Quincy Raceway for the 19th leg of the UMP DIRTcar Summernationals. Pierce posted a lap of 12.883 seconds on a 3/8-mile track that’s significantly different in banking than the last completed tour event in 2013.

Pierce will start on the pole of the third heat race. Other heat race polesitters: Tyler Erb of New Waverly, Texas, and Bob Gardner of East Peoria, Ill., who is driving his brother John’s backup car. All 19 drivers will transfers through heats to the main event with heat winners redrawing for the top three spots.

Pesky, light rain that was off-and-on for two hours finally made way for racing that’s running about 90 minutes behind schedule. It’s breezy and pleasantly cool. … The track’s banking has been cut down about 2 feet and the cupping removed from the track’s corners after recent work spearheaded by drivers, including tonight’s entrant Jason Perry of Payson, Ill. Standing at the pit shack you can now see the cars go around the corners where it was previously blocked by the height of the banking. The corners also appear flatter rather than previously. … Drivers have practiced on the new configuration but the track rained out last week. ... Series regular Bob Gardner of East Peoria, Ill., is driving his brother John Gardner Jr.’s second car after having problems getting the liftgate open on his hauler. … After running the first 18 races, Timothy Culp of Prattsville, Ark., called it a tour and headed home after Highland. His trip home was delayed, however, when his hauler had two flat tires, requiring him to call for assistance to get rolling again. … Tyler Erb of New Waverly, Texas, fresh off a sixth-place finish Saturday night in World of Outlaws Craftsman Late Model Series in Spring Valley, Minn., is among 19 entrants.

After being rained out on back-to-back nights last season, the UMP DIRTcar Summernationals tour returns to Quincy Raceway for the first time since 2013. Series points leader Bobby Pierce of Oakwood, Ill., leads the tour into the 19th leg as the month-long series runs its last event in Illinois in heading for the home stretch.

Late-afternoon scattered storms blew through after 5 p.m., but left just enough rain to knock the dust down although showers lingered while some race teams waited near the Broadway-170 junction two miles west of the track. The rain definitely is pushing racign back at least an hour later than the originally scheduled 6:15 p.m. hot laps.

A first-time series winner is likely at Quincy as none of the previous series winners at the 3/8-mile oval are expected. Shannon Babb of Moweaqua, Ill., is a three-time series winner while Brian Shirley of Chatham, Ill., Jeep Van Wormer of Pinconning, Mich., and Randy Korte of Highland, Ill., are single-race winners.

The format will likely be three qualifying groups setting up three heat races and five drivers apiece transferring to the main event. A consolation race will set the remainder of the lineup for the 40-lap feature.