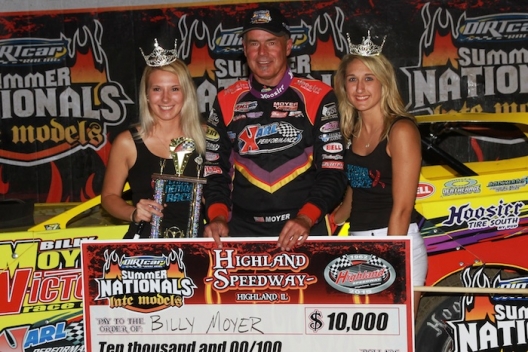 HIGHLAND, Ill. — In what he says is his final year of racing, Billy Moyer is still making it count on the UMP DIRTcar Summernationals circuit.

The 58-year-old Moyer, the tour’s all-time winningest driver, clicked off his third series victory of 2016 and 93rd of his career Saturday at Highland Speedway. Moyer was never challenged, building a lead of nearly a half-track over the first 30 laps while racing to the $10,000 payday at the quarter-mile Madison County Fairgrounds oval.

Polesitter Devin Gilpin of Columbus, Ind., finished 1.5 seconds behind as the runner-up, but it was only a series of late cautions that allowed him to stay close after Moyer knifed through traffic in building an virtually insurmountable lead.

"We changed a couple of thigs on the car today. We had to redeem ourselves as bad as we've been the last couple of days," Moyer said. "It ran like it was supposed to tonight. It felt good."

Series points leader Bobby Pierce of Oakwood, Ill., stretched his already healthy lead in the championship chase with a third-place finish while Highland regular-season points leader and hometown driver Chad Zobrist was fourth. Jason Feger of Bloomington, Ill., slipped back to fifth at the finish after running third or fourth much of the 40-lapper.

Four cautions slowed the action, three in the final 11 laps. A lap-33 yellow flew when high-flying Daryn Klein of Fairview Heights, Ill., who ran third the first 21 laps, got into the wall between turns one and two while running fifth.

A Rusty Griffaw-Tim Manville tangle drew a lap-30 yellow and a lap-35 caution waved for debris.

The first caution — which became an unofficial red flag — came when the first start was scrapped when Jason Suhre’s right-front corner got hung up on the left-rear tire on the Michael Kloos car, triggering a caution that also involved Jim Black and Matt Bailey. It required two tractors and several track workers to pry the Suhre and Kloos cars apart and Kloos had to the infield hot pit to change his flat tire (crew members took advantage of the red flag to go to the pits to grab a tire).

The series continues Sunday at Quincy (Ill.) Raceway for a $5,000-to-win event, the 19th leg of the Late Model tour.

Notes: Moyer’s only previous series victory at Highland came in 1999. … His previous 2016 series victories came at Cedar Lake Speedway in New Richmond, Wis. ... Rusty Griffaw’s nosepiece suffered significant damage in a lap-33 scramble with Tim Manville and was barely hanging on in the final laps. … Hometown driver Matt Bailey drove Brent McKinnon’s car in the feature (starting on the tail) after a rollover accident at the checkers of the first heat race. Bailey was OK but he said the bolt-on repairs on his No. 52 will be relatively expensive. He retired after seven laps in McKinnon’s car. … Long-time regional racer Mike Hammerle of St. Charles, Mo., has been a no-show at recent series races after a sinus infection spread to his brain, requiring surgery and a recovery that will likely leave him hospitalized a few weeks, Kevin Gundaker said. He wasn’t sure what hospital Hammerle was in and has been trying to reach the No. 16H driver's wife, Linda.

Polesitter Gordy Gundaker, catching a break when Dan Jacober's dropped driveshaft was blamed for a caution before Gundaker spun, went by Timothy Culp on an early restart for a 10-lap victory. Brian Diveley and Bob Gardner got the final two transfer spots while Culp faded to fourth, forced to take a provisional for the feature. Besides Jacober's caution, Travis Horner's lap-three spin also drew an early yellow.

Fourth-starting Jason Feger, getting second when Ryan Unzicker slipped up on the first lap, went by polesitter Bobby Pierce on the second lap and led the rest of the 10-lapper. Pierce stayed in touch but couldn't regain the lead while Michael Kloos broke away from the pack to finish thid. Eighth-starting Tim Manville and Unzicker got the final transfer spots. The race ran caution-free.

Polesitter Devin Gilpin built a straightaway lead after three laps and cruised to a preliminary victory. Behind him, a low-running Jason Suhre and high-running Chad Zobrist battled side-by-side for the second spot with Zobrist taking the position at halfway. Sixth-starting Rusty Griffaw dropped Suhre to fourth and and Rick Salter, who started outside the front row, got the fifth and final transfer spot in the caution-free race.

In a race where Matt Bailey transferred but ended up on his lid, polesitter Billy Moyer got the hole shot and cruised to a 10-lap victory. Outside front-row starter Daryn Klein nosed in on Moyer in turn two on the fourth lap and ran a solid second while Jeff Herzog and Matt Weidner also earned transfer spots along with Bailey, who was part of an early caution but rallied back into contention. In a tight battle amid the top five, Bailey's car was pinched into the frontstretch wall by Herzog and ended up upside down about 30 yards past the flagstand. He was OK. Third-starting Gordy Gundaker held that spot early but faded. Bailey and Chase Porter got together in turn three for a lap-two caution.

Billy Moyer of Batesville, Ark., topped 30 qualifiers Saturday at Highland Speedway for the 18th leg of the UMP DIRTcar Summernationals. Moyer tripped the clock at 13.217 seconds at the quarter-mile Madison County Fairgrounds.

Moyer starts on the pole of the first heat. Devin Gilpin of Columbus, Ind., and series points leader Bobby Pierce of Oakwood, Ill., are other heat race polesitters. The top five finishers from each of three heats transfer to the main event with the rest of the drivers heading to a consolation race. The heat winners redraw for the top three spots in the feature lineup.

Points leader and reigning series champ Bobby Pierce of Oakwood, Ill., leads the series to Highland, a long-time UMP track where hometown driver Chad Zobrist is aiming for yet another Late Model championship.

Saturday's 30-car field was split into three qualifying groups with three heats and a consolation preceding the main event. Modifieds and B-mods are also on the card.