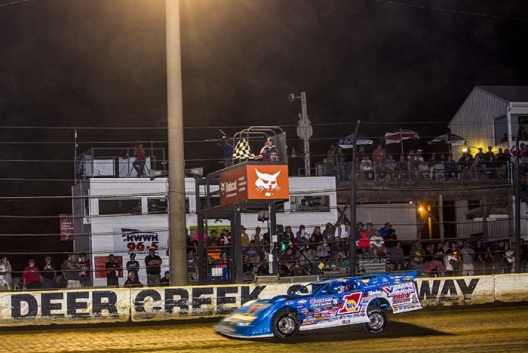 SPRING VALLEY, Minn. (July 9) — Josh Richards of Shinnston, W.Va., turned a milestone evening for the World of Outlaws Craftsman Late Model Series into another example of his 2016 dominance.

In the national tour’s 500th A-Main since its reincarnation in 2004 under the World Racing Group banner, the third-starting Richards overtook Billy Moyer Jr. of Batesville, Ark., for the lead on lap three and controlled the remainder of the distance to capture Saturday night’s NAPA Auto Parts Gopher 50 at Deer Creek Speedway.

The three-time series champion and current runaway points leader pocketed $11,000 for his ninth WoO triumph of 2016, matching his victory total from all of last season. It was also his second career win in the the prestigious Gopher 50 event at a spic-and-span 3/8-mile oval that Richards could not help raving about after the checkered flag.

“This place does not get enough credit,” said Richards, who previously captured the Gopher 50 in 2011 “This is probably one of the top facilities in the country and I always enjoy coming here. Everyone here works so hard, and it’s just cool to win on this stage and get another Gopher.”

Rick Eckert of York, Pa., battled Clanton relentlessly throughout the race’s second half but settled for a third-place finish, with eighth-starter Chad Simpson of Mount Vernon, Iowa, placing fourth — his second consecutive top-five finish with the WoO — and 10th-starter Jimmy Mars of Menomonie, Wis., completed the top five.

Richards was never seriously challenged during the 50-lap affair, but his mind certainly didn’t wander from the task at hand.

“That race was a little bit of a handful because the track changed so much,” Richards said. “It had so much grip, and then it blew off and you just felt like you were dying so you had to search around a little bit.

“You had to search. I looked up and if I got a decent lead at all I’d move around and just kind of see where (his closest pursuer) was at because I just know that these guys are so good, if you get stuck in one spot too long, they’ll drive right by you.”

Richards weathered five restarts to emerge victorious for the 67th time in his WoO career, leaving him just five wins behind Darrell Lanigan of Union, Ky., who had won the last three Gopher 50s but wasn’t on hand because he’s no longer a WoO regular, for the top spot on the circuit’s all-time win list. He also continued to expand his commanding points lead, pushing his edge to 220 points over Clanton with 19 events remaining on the 2016 schedule.

“It’s been a dream season,” Richards said, “but we still got a long way to go.”

Clanton, 40, slid his Capital Race Car past Moyer for second on lap 14 after starting sixth, but he only briefly was able to nose underneath Richards through turns one and two on a lap-33 restart. His focus late in the race was on turning back the challenges of Eckert, who drew alongside Clanton numerous times down the stretch.

In the end, Clanton felt fortunate to preserve his third second-place WoO finish of 2016.

The 50-year-old Eckert, who won the Gopher 50 in 2006, slid backwards slightly from his fourth starting spot at the initial green flag. He rallied to reach third behind Clanton just after the halfway mark but was unable to find a route into the bridesmaid position.

“We made some real progress the last couple nights with our car,” said Eckert, who piloted his Paul Crowl-owned Longhorn car to his seventh WoO top-five of the season. “I just couldn’t get Shane cleared there. We were inches away from each other for half the race.

“I just got such a terrible start and couldn’t get going, and I had to rebound from that.”

The WoO's 500th feature since 2004 was especially noteworthy for Eckert, who is the only driver to attempt to qualify for all 500 of those events. He has only failed to start two of the 500 WoO features, both of which offered only show-up points.

Five caution flags slowed the event. Austin Smith of Cedartown, Ga., and Brent Larson of Lake Elmo, Minn., tangled in turn two on lap five; Jason Rauen of Farley, Iowa, sat disabled in turn two with a cut left-rear tire on lap 13; Chris Simpson of Oxford, Iowa, slowed on lap 24; Chub Frank of Bear Lake, Pa., fell off the pace on lap 33 after hitting the wall and sustaining right-rear damage to his car; and Eric Wells of Hazard, Ky., slowed with with a flat left-rear tire on lap 44 after running as high as fourth.

Moyer, who started from the pole position and led laps 1-2, ran in the top five throughout the race’s first half but faded to ninth in the final rundown. Outside polesitter Boom Briggs of Bear Lake, Pa., also fell from contention as the feature wore on, finishing 17th.