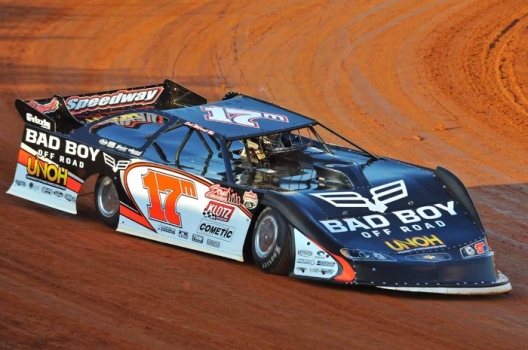 In fact, when McDowell was asked after his dominant flag-to-flag victory in Saturday night’s 60-lap Mountain Moonshine Classic at Smoky Mountain Speedway if he had ever enjoyed a better outing in his first start with a new car, he offered a simple answer.

“Not really,” the 50-year-old McDowell said, a broad smile on his face after pocketing $12,000 for his seventh career Lucas Oil Late Model Dirt Series triumph and first since Aug. 21, 2014, at Volunteer Speedway in Bulls Gap, Tenn.

McDowell was in a league of his own, racing off the pole position to lead the entire distance without facing a single serious challenge. He crossed the finish line line a commanding 2.465 seconds in front of Batesville, Ark.’s Jared Landers with his new chassis builder, Scott Bloomquist of Mooresburg, Tenn., placing third to give Sweet-Bloomquist chassis a sweep of the event’s podium.

“I need to thank Shane (McDowell), my brother (and crew chief), first of all, and then Scott (Bloomquist),” said McDowell, who announced earlier this year that his team was adding a Sweet-Bloomquist car to its stable of Warriors but wasn’t sure when the machine would hit the track for the first time. “We’ve been talking (with Bloomquist) since Knoxville last year (September’s Late Model Nationals) over a beer. I’m looking forward to working with him.

“We’re a little bit different (on setups) tonight, so I think we’ll be able to learn … and our driving styles are a lot alike, so I think I’m just a beneficiary to not knowing anything to change, so we didn’t change anything.

“But everything worked real well,” he added. “It was our turn tonight.”

McDowell had little trouble negotiating the sprawling, high-banked 4/10-mile oval while setting the pace. He never relaxed — especially when he had to deal with lapped traffic — but three of the race’s four caution flags flew between laps 49 and 52, making slower vehicles a non-factor for him in the final circuits.

“The racetrack’s got so much speed here that it’s timing when you catch those (lapped) cars, and if you catch them in the wrong spot they’ll drive off from you,” McDowell related. “I would just kind of bide my time (reaching slower traffic). Shane was back there giving me hand signals to tell me if I had a lead because definitely, when you’ve got those guys behind you, you’re like, ‘All right, what do I need to do? Do I need to make something happen?’”

Getting extra-aggressive wasn’t necessary for McDowell, who was beaming after authoring such a spectacular performance in his first night racing as part of Bloomquist’s chassis team.

“Scott’s worked his tail off really to build what he’s built,” said McDowell, whose third overall victory of 2016 was his first since a World of Outlaws Craftsman Late Model Series score on April 8 at Duck River Raceway Park in Wheel, Tenn. “Shane and I are focused on racing a little bit and the driving school stuff and the development stuff, so hat’s off to those guys for the piece that they built. We was just in the right spot tonight.”

McDowell is looking forward to working with a Hall of Famer like Bloomquist throughout the remainder of the 2016 season.

“Putting our heads together, that was the biggest thing with us making a move,” McDowell said. “I’m sure I’m gonna be on the other end back there, but if you’re in the top five with this bunch it’s good. Hopefully (Bloomquist) can learn from that and I definitely can learn from what he’s doing.”

Landers, who overtook his mentor Bloomquist for second place on a lap-49 restart but couldn’t threaten McDowell after caution flags on laps 50 and 52, had a good-natured view of finishing second to McDowell.

“I hate that Darrell got his car tonight,” Landers with a smile and hearty laugh.

Of course, the 34-year-old Landers, who registered his fourth runner-up finish of the 2016 Lucas Oil campaign, understood that adding a veteran like McDowell to the Sweet-Bloomquist roster should help both him and Bloomquist.

“But you know what? We’re gonna learn from this car of his (tonight),” Landers said of McDowell. “It’s a little bit different package … it’s just gonna make these cars faster, so it’s gonna be hard (for the competition) to hang on in races to come. These things are just gonna get faster.”

Bloomquist, meanwhile, might have been slightly disappointed to see his three-race Lucas Oil Series win streak come to an end, but he was certainly a pleased chassis builder.

“We’re happy for Dale and how he said he really loved his car,” said Bloomquist, who extended his Lucas Oil Series points lead. “Usually I’ve not had much (outside) input when I’ve worked with anybody else — I’ve just kind of always been a one-man band, and whatever I work on and try and test, I hand it off. I think with Dale, I’m gonna be able to get some feedback and I think we’re gonna have a good program.”

The 52-year-old Bloomquist didn’t have quite enough speed on Saturday night to outrun his new customer.

“We ended up setting up a little bit different with some older tires,” said Bloomquist, who started on the outside pole. “It just ended up not hooking up as good, and by spinning ‘em, that hurt ‘em even more. We just kind of missed it a little bit on tires, but it’s good to see a couple of our cars out front. We’ll take third to our own stuff.”

Notes: McDowell became the third driver to record both Lucas Oil Series and WoO tour wins in 2016, joining Bloomquist and Josh Richards of Shinnston, W.Va. … Landers raced without the assistance of his crew chief, Jason Durham, who was battling an attack of kidney stones. … The first of the feature’s four caution flags flew on lap 30 when Darrell Lanigan of Union, Ky., slowed with tire trouble and, moments later, Jimmy Owens of Newport, Tenn., who started fourth and had been running the top five, also fell off the pace with a smoking car. Lanigan returned and finished 10th while Owens failed to finish. … Chris Madden of Gray Court, S.C., reached fourth place with a lap-34 pass of Martinsville, Ind.’s Don O’Neal, but his hopes were dashed when he slapped the wall between turns three and four on lap 49 and brought out a caution flag. … Mike Marlar of Winfield, Tenn., advanced from the 11th starting spot to fourth, but on lap 50 he hit the turn-three wall, triggering a chain-reaction scramble that first collected charging defending Lucas Oil champion Jonathan Davenport of Blairsville, Ga., who hit the rearend of Marlar’s car and then was clipped by both O’Neal and Casey Roberts of Toccoa, Ga. Davenport’s car sustained significant left-side damage and he finished 17th, dropping him 245 points behind Bloomquist in the series standings. … Dennis Erb Jr. of Carpentersville, Ill., slowed to bring out the race’s final caution flag on lap 52. … Craig Vosbergen of Perth, Western Australia, started his summer racing trip to the United States with a 13th-place finish. … The race was run before a crowd that was deemed “record-setting” by track officials.