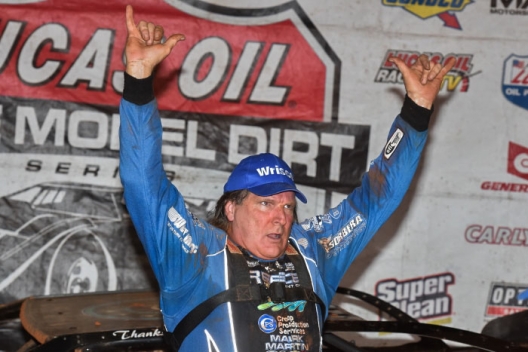 GAFFNEY, S.C. (July 8) — A long night at Cherokee Speedway didn’t dull Scott Bloomquist’s momentum. After a rain delay of over four hours, the red-hot Hall of Famer simply picked up where he left off over the Independence Day weekend and stormed to victory in the 50-lap Grassy Smith Memorial at Cherokee Speedway.

In an event that began on Friday night but ended in the wee hours of Saturday morning due to a thunderstorm that struck after all qualifying was complete, Mooresburg, Tenn.’s Bloomquist proved dominant once again on the Lucas Oil Late Model Dirt Series. He led all but one lap of the feature en route to his third consecutive triumph on the national tour — and a victory lane celebration that occurred after the final checkered flag flew at about 3:20 a.m.

Bloomquist, 52, padded his Lucas Oil Series points lead — and pushed his 2016 earnings on the circuit over the $200,00 mark — with a $10,000 score that was his tour-leading eighth of the season. It was also his milestone 70th career win on the series, which leads all drivers in Lucas Oil Series history.

While Chris Madden of Gray Court, S.C., was able to overtake Bloomquist in lapped traffic to lead lap 18, the local hero’s bid ended during a caution period that same circuit when he retired with a flat right-rear tire. Bloomquist moved right back in front for the restart and never looked back, controlling the remainder of the distance to steer his Sweet-Bloomquist car across the finish line a commanding 3.710 seconds in front of Toccoa, Ga.’s Casey Roberts.

Fourth-starter Johnny Pursley of Clover, S.C., settled for third place after losing a late-race duel for the runner-up spot with Roberts. It was still a career-best Lucas Oil Series finish.

With Cherokee’s program coming one day after a Lucas Oil Series rainout at Fayetteville (N.C.) Motor Speedway, Bloomquist was appreciative of the efforts made by track and series officials to run in the track and complete the feature. Drying the surface enough for racing was a lengthy process after the rain hit around 10 p.m., but the A-Main starters hit the track for hot laps around 2 a.m. and the feature took the green flag just over a half-hour later.

“I told people by lap 20 there’d be dust, but it’s just hard to get that initial glaze off it,” Bloomquist said. “I was surprised when we hot-lapped — the track hooked right up. (The track crew) did a great job with the track … the track’s smooth, you could race all over it. We stayed up high most of the race, but you could run down low and get by some lapped cars.”

Bloomquist, who started from the pole position after winning the evening’s first heat, experienced only one real scare. That was when Madden, who started second, nosed in front on lap 18.

Would Bloomquist have been able to regain the lead if Madden hadn’t been struck down by a flat tire moments after gaining command? He was confident he had the speed to pull it off and win for the fourth time in the last five Lucas Oil Series events.

“The car was really good,” Bloomquist said. “I just couldn’t really see. We got in traffic and Chris got by us there. I feel like we were faster, but I just kind of settled in and went to the bottom because I couldn’t really see where the cushion line was at.

“Who knows what would’ve happened? I think we were fast enough we would’ve still got it done.”

Bloomquist recorded his third career Lucas Oil Series win at Cherokee, a track where he’s enjoyed plenty of success over the past three decades.

“We like coming over here,” Bloomquist said. “This place has always had a lot of character. Just because it got shortened (from a big half-mile) a little bit doesn’t take nothing away from it. You still gotta sit up in the seat all night long. You can get in trouble here quick.”

Roberts, who owns two career Lucas Oil Series triumphs, had nothing for Bloomquist once he gained control of second place from Pursley following a lap-31 caution flag.

“We just weren’t real, real good,” said Roberts, who started third in his Cushman Racing Longhorn Race Car. “(Bloomquist) was real good, and Madden was goo. We probably had a third-place car or so … we wound up second, so you can’t complain.

“I think me and Johnny (Pursley) were pretty equal. We just got him (for second) on that last restart.”

Pursley, 32, was all smiles over his third-place finish with his Longhorn machine.

“We finally got a good run with this crowd,” said Pursley, who battled hard with Sheppard in the final circuits. “That was fun, me and Chris (Madden) kind of back-and-forth there for a while (for second early in the race). I feel like me and Casey were pretty even … it was just who could get who on the restart.”

Five caution flags dotted the event, which took just over 41 minutes to complete. Earl Pearson Jr. of Jacksonville, Fla., brought out the first yellow flag on lap one when his car slowed with a broken driveshaft. Other cautions were triggered by Ross Bailes of Clover, S.C., who pitted for a new tire on lap 18; Chris Ferguson of Mt. Holly, N.C., who slowed on lap 20 but rallied to finish ninth; and Jared Landers of Batesville, Ark. (laps 22 and 31).