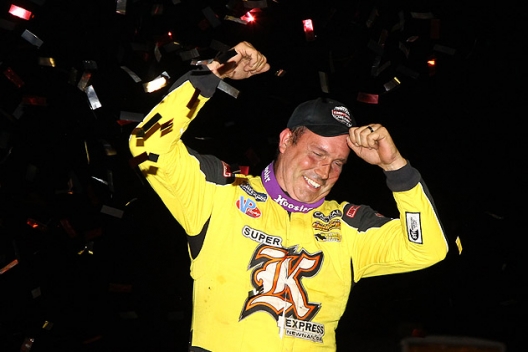 The 40-year-old defending WoO titlist had no peer in the national tour’s first visit to the half-mile oval since 2004, rolling off the outside pole to lead the caution-free 50-lap feature from flag-to-flag and register his fifth series triumph of the season.

Simpson settled for a third-place finish after briefly holding the runner-up spot with a lap-40 pass of York, Pa.’s Rick Eckert, who won the only previous WoO event contested at Mason City. Eckert finished fourth after starting on the pole and Billy Moyer Jr. of Batesville, Ark., charged forward from the 11th starting spot to complete the top five at a track in his Hall of Fame father Billy Moyer’s native state.

Clanton snapped an eight-race WoO winless streak, emerging victorious for the first time since May 27 at Moler Raceway Park in Williamsburg, Ohio. He collaborated with his shock advisors to get his Capital Race Car back to the front of the field.

“The car was good,” said Clanton, who led the WoO circuit in 2015 with 10 wins. “Little Brian (Daugherty) and GW (Performance) and all the guys at Keyser (Manufacturing)-Integra Shocks, we worked pretty hard this past week trying to find what we needed to do to make this thing go and it’s pretty special right now.

“To get a win here that eluded me the last time we was here (he finished eighth in the 2004 WoO event) … I went a little hard on tire (12 years ago) and tonight I think I went a little softer than everybody else and it showed. It was pretty good.”

Clanton could have done without a non-stop 50-lapper on the sprawling, fast Mason City layout, but he negotiated his way to his 35th career WoO triumph, tying him with Eckert for fourth on the tour’s all-time win list.

“We didn’t get a caution or nothing so,” said Clanton, whose in-laws and car owners, Ron and Kathy Davies, were in attendance to witness the race after making the long drive from their home in Warren, Pa. “It would’ve been nice to have one and just relax a little bit. Fifty laps around this place is pretty grueling, just trying to hit your marks … and it’s pretty dark down the backstraightaway. It was treacherous trying to pass a couple cars.”

Putting his name alongside Eckert’s in the WoO history books pleased Clanton.

“I don’t know if I could catch Josh (Richards) or (Darrell) Lanigan,” said Clanton, who trails Lanigan (70 wins), Richards (66) and Billy Moyer of Batesville, Ark. (42) in the victory rankings. “But to be fourth and tied with Eckert, one of the good guys in the sport, I’m pretty honored.”

The 28-year-old Richards — racing at the track where he earned his first-ever WoO fast-time award as a fresh-faced 16-year-old Dirt Late Model rookie in 2004 — was unable to add another checkered flag to his career total despite having a Rocket XR1 car that might have been comparable to Clanton’s machine. He was hampered by a heat-race finish that put him in the fifth row for the start of the feature — and with no caution flags to tighten the field, Clanton was just too far ahead once the three-time WoO champion finally slipped underneath Simpson to grab second place.

“Shane and those guys did a great job,” said Richards, who leads all drivers with eight WoO wins this season. “We got stuck on the outside in the heat race and lost a position and had to start ninth (in the A-Main), and it just went green flag the whole way. It just took so long to run everyone down. I think we were better than (Clanton) was at the end … it was just, we were strung out so far it was hard to get up through there and pass him.

“It was a good effort for our guys … I just put us behind early. It’s good to know the car’s good enough that we can go forward. That’s the biggest thing.”

Simpson, 37, was looking for not only his first-ever WoO victory but also a complete sweep of the program after setting fast time and winning a heat race. He was able to finally wrestle second place from Eckert on lap 40, but he was unable to draw his Victory Circle mount within striking distance of Clanton before Richards dropped him back to third.

“It’s a lot of fun racing right here in Iowa,” Simpson said. “It’s fun these (WoO) guys get to come race with us (in his home state). We had a good car … we’re getting closer (he finished sixth Thursday night at Hamilton County Speedway in Webster City, Iowa). The tire game hurts us a little bit when we come to these deals because we run on hard tires around here all the time, but I guess we’re guessing pretty good so far.”