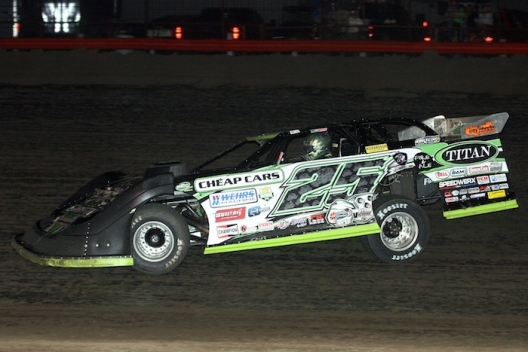 FARMER CITY, Ill. — It took a while for Jason Feger to get rolling on 2016’s version of the UMP DIRTcar Summernationals, but the Bloomington, Ill., driver continued his recent hot streak Friday at Farmer City Raceway with a $10,000 victory.

Notching his second series victory of the week and fourth straight finish of third or better, the 2010 series champion picked his way to the front from his ninth starting spot at Farmer City, overtaking race-long leader Devin Gilpin of Columbus, Ind., with 10 laps remaining and thrilled his home-state fans the rest of the way.

“We had to work pretty hard for it,” said Feger, who has 17 career Summernationals victories. “I messed up real bad qualifying and had to start seventh in the heat. I dug out of the hole up to third (in the heat) and started ninth (in the feature). To pass the caliber of cars we did there to be able to get this win, it feels really good.

“This place was awesome. It was great to see a packed house here tonight … I’ve been coming here pretty every week since I was 3 months old. I love this place, and the track crew did an excellent job tonight. Heck, I even still got the spoiler on the car, so that says something. It was just a great night.”

“It’s a good run for us anyways. Jason’s awful good here,” said Unzicker, who was held up by traffic in his final pursuit of Feger in the low groove. “I don’t know. I just wish we could’ve kept charging on the bottom, because I think it would’ve been a helluva show for the fans.”

Manville spun in his heat race but rebounded with a charge from 20th in the main event.

“We just kept rolling through there,” Manville said. “I was like, ‘Man, we might actually run up in the top five.’ Then once we got around eighth or sixth, I was like keep it coming, we can keep on going here. The car was awesome.”

Gilpin, a modified graduate who started on the pole and was gunning for his richest Late Model victory, ended up fourth while winningest series driver Billy Moyer of Batesville, Ark., ran as high as second before settling for fifth.

Shannon Babb of Moweaqua, Ill., a three-time series winner at Farmer City, ran second the first 26 laps but blew a right-rear tire when his car’s right-rear suspension gave way as he exited turn four. Babb abruptly pulled off the track and his disabled machine was pushed to the infield.

Beside’s the lap-27 caution for Babb, the only other slowdown came on the 17th lap when Mike Glasscock got into the turn-four wall, then limped his car around the outer half-mile horse track and stopped just off the backstretch.

The tour heads to Highland Speedway on Saturday for the Todd & Colleen Penrod Memorial, a $10,000-to-win event that marks the fourth of five straight series events in Illinois.

After Ray Bollinger’s victory in the modified feature, the track plans a third grooming session to get the track ready for the Late Model 50-lapper. Many drivers headed for the turn-four fence to evaluate the changes … Polesitter Devin Gilpin of Columbus, Ind., wishes his dad was at Farmer City (“he’s a good signal man”), but still hopes to get the job done and earn his first victory in any division at Farmer City. “I’d like to get this deal, but it’s going to be tough for 50 laps keeping the tires on it,” Gilpin said. … He starts alongside Kent Robinson of Bloomington, Ind. (an all-Indiana front row), a driver who left Des Moines, Iowa, this morning after putting the finishing touches on his new Moyer Victory Race Car from Karl’s Performance, the shop operated by Hall of Fame driver Billy Moyer’s uncle Carl. Robinson is thrilled with the debut of the car so far after making a sixth-to-first charge to win a heat race over series points leader Bobby Pierce. Robinson arrived in Iowa on Wednesday with his seat and motor to install in the new piece. “There was a lot of really, really good help up there at Carl’s,” Robinson said. “It’s a top-notch operation.” …. Robinson, in his first race with new crew chief Jason Palubicki (who recently left Bowman Motorsports), was pitted at Farmer City along with Moyer and Jason Feger, another Victory Race Car driver.

Third-starting Joe Harlan took the lead from polesitter Timothy Culp on the third lap and cruised to a 10-lap victory. He transferred to the main event along with Culp and third-finishing Daniel Flessner in the caution-free race.

Devin Gilpin eased away from an early side-by-side duel with fellow front-row starter Kevin Weaver to win the finale heat while a four-car battle for the final three spots raged behind them. Jason Feger took third from Ryan Unzicker on the ninth lap with Unzicker and Bog Gardner getting the final transfer spots. The race's lone caution appeared on the sixth lap when John Gardner Jr. spun over the banking in turns one and two.

Shannon Babb got the jump from outside the front row and drew away for an easy victory over polesitter Billy Moyer. Much further back, Scott Schmitt outdueled McKay Wenger to grab third while Jay Morris got the final transfer spot from Rusty Griffaw on the final lap. The first start was scrapped when Griffaw spun between turns three and four.

Doing something few drivers have done on the series, sixth-starting Kent Robinson took the lead from Bobby Pierce on the fifth lap and raced to a 10-lap victory. Pierce fought back and raced tightly with Robinson for a few laps before finishing 0.643 seconds behind at the checkers. Mike Glasscock was third and Gordy Gundaker — who got a terrible start and was crowded high in turn four — ended up fourth. Brian Diveley got the final transfer spot. Tim Manville spun inside turn four whille running fourth on the second lap, and a first-lap caution appeared when Don Hammer got into the turn-three wall; Hammer's car was towed away.

Bobby Pierce is looking to become the first series driver with three straight victories since Shannon Babb won the final five points races of 2011; Babb stretched that streak to six in a row with a victory in a makeup feature five nights later. ... After a broken pulley dumped the water in his engine while leading Macon (Ill.) Speedway’s feature Thursday, former Farmer City track champ Kevin Weaver is back in action after dropping a fresh Pro Power Racing Engine in his No. B12, the best of his powerplants that was just freshened a few weeks earlier. … Jose Parga of New Berlin, Ill., the reigning UMP DIRTcar Crate Late Model champ and this year’s points leader, entered his Crate car in both divisions at Farmer City. He was well off the pace in time trials, nearly a second and a half off fast time. … After a rollover accident early in Macon’s feature Thursday in his Club 29 Race Car, Shannon Babb arrived at Farmer City with his Rocket Chassis. Babb is the winningest series driver in Farmer City history with three victories. … Devin Gilpin is jumping in for a brief visit on the Summernationals, but he plans to tackle the Ray Cook-promoted Schaeffer Oil Southern Nationals started July 16 at Wythe Raceway in Rural Retreat, Va., a track planning to start every Super Late Model that enters the tour opener. … Jay Morris of Watseka, Ill., and his crew worked on repairing a broken oil line following Farmer City’s hot laps. … The only incident in time trials came when Timothy Culp's car nosed into the air when he got high on the turn-one banking.

Series points leader Bobby Pierce of Oakwood, Ill., stretched his lead of fast times on the tour Friday at Farmer City Raceway, tripping the clock with a 12.749-second lap at the quarter-mile oval to earn the pole position for the first heat.

Other heat race polesitters via group time trials: Billy Moyer of Batesville, Ark., and Kevin Weaver of Gibson City, Ill. The top five finishers from each of three heat races advance to the 50-lap feature with the heat winners drawing for the top three starting spots.

Pierce enters the quarter-mile oval looking for his third straight series victory and 10th overall after Wednesday and Thursday victories in Illlinois at Peoria and Macon Speedways.

Pierce will be looking for his first series victory at the track where is father Bob Pierce, a former series champion, is among 15 previous winners. Don O’Neal of Martsinville, Ind., leads the way with four victories followed by Billy Moyer of Batesville, Ark. (3), Bill Frye of Greenbrier, Ark. (3) and two apiece for Dennis Erb Jr. of Carpentersville, Ill., and Shannon Babb of Moweaqua, Ill.

Friday's field will be split into three groups for qualifying, then run heats with five drivers apiece transferring. A consolation race and 50-lap feature completes the Late Model program with Crate Late Models, modifieds, street stocks and hornets also on the card.