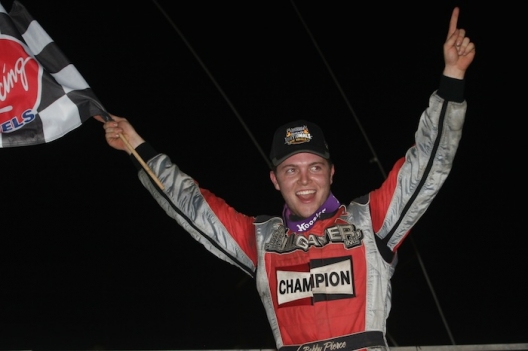 Inheriting the lead on lap 38 when the Gibson City, Ill., veteran retired his smoking No. 12B to the infield, the second-generation driver from Oakwood, Ill., led the remaining distance, dominating the final laps to capture his ninth UMP DIRTcar Summernationals victory of the season and first career Herald & Review 100 triumph.

“That’s what it takes to get this many wins. You’ve got to have luck,” Pierce said after Thursday’s race. “You can be running first and break like (Kevin) Weaver did. He was super fast tonight. I was just kind of waiting for the track to slick off a little bit. I was just kind of bidding my time, but he was really fast. I was going to be pretty worried."

It was outside polesitter Jason Feger of Bloomington, Ill., charging to the lead at the drop of the green flag, fighting back challenges from Weaver before falling to second on lap 25. With Weaver retiring just a dozen laps shy of the halfway mark, Pierce took command of the field and never looked back.

Successfully navigating heavy lapped traffic, Pierce stretched his lead over second running Feger, with only nine cars remaining on the lead lap when the final yellow flag waved on lap 68. Pierce crossed the finish line with more than a straighaway’s advantage over the driver of the No. 25 machine, notching his 16th career Summernationals victory.

“My dad was with the sticks, giving me a pretty big lead,” Pierce said. “But it’s like every time I slow down, you always make a mistake. So you’ve just got to keep going as hard as you can. What I tried to do was just look at the next lapped car and pretend he’s the guy in the lead and just go after him and pass him, that way you never get out of your groove. It was a great night."

“We started off strong there and I had some brake issues,” Feger said. “It took me a while to figure out what was going on. Pretty soon the pedal was on the floor. I think I just had something hung up back there. I got into the front brakes and got a little bit better. It’d kind of come and go and I was real inconsistent. I think if that wouldn’t have happened, I had a car good enough to win. That’s a long way to race around this place with not much brakes.”

Gardner, who is chasing the complete Summernationals tour for the first time, posted his best series finish so far season.

“I’ve come so close,” Gardner said of his previous top-five runs. “The crew keeps digging. We’ve had our head down a couple of times. It’s been up and down. But all in all, this series has done wonders for me and my team. Hopefully it keeps getting better. Right now, this tops it off.”

Notes: A red flag fell on lap three when seventh-running Shannon Babb hit a tractor tire in the bottom of turn two, rolling his No. 18 machine. … Gordy Gundaker and Roben Huffman tangled in turn four to draw a caution on the fourth lap. … A yellow flag flew on lap 16 when Allen Murray got into the turn-one wall, with Timothy Culp and Jim Black slowing on the racetrack. … Mckay Wenger slowed on the frontstretch to draw a caution on lap 21. … Ryan Unzicker drew a caution on lap 29 when he slowed with a flat tire. … A yellow flew on lap 47 when Danny Smith slowed on the racetrack. … The final caution fell on lap 68.

With third-starting Shannon Babb going three-wide with the front row on the opening lap, outside polesitter Brian Diveley took an early lead. Diveley and polesitter Allen Murray crossed the line side-by-side on lap eight, with Murray taking the point one circuit later. A yellow flag waved on lap nine when Dean Carpenter rolled on the frontstretch. Allen picked up the heat race win, with Diveley and Babb rounding out the podium. McKay Wenger finished fourth, with Jim Black running fifth.

Working around the high side, second-starting Jason Feger jumped to an early lead. A yellow flag slowed the field on the second lap for debris on the racetrack. Feger held his lead on the restart, with polesitter Kevin Weaver in tow. Feger led the entire distance, with Weaver running second. Daryn Klein finished third, with Bob Gardner running fourth. Gordy Gundaker finished fifth to round out the top five.

Outside polesitter Bobby Pierce charged to the lead at the drop of the green flag, with a yellow flag waving on the first lap for a turn-two tangle involving Roben Huffman, Rusty Griffaw and Matt Taylor. Stretching his lead over polesitter Ryan Unzicker, Pierce picked up the heat race win. Unzicker finished runner-up, with Timothy Culp improving one spot to run third. Chuck Mitchell finished fourth, with Huffman rounding out the top five.

While series points leader Bobby Pierce of Oakwood, Ill., is still looking for his first Herald & Review 100 victory, the second-generation driver has had past success at the Illinois bullring, winning the 2014 Lucas Oil Series event at the 1/5-mile oval. After finishing runner-up in this week’s tour events at La Salle and Peoria, veteran Kevin Weaver of Gibson City, Ill., is also aiming to finish one spot better tonight, adding another Herald & Review 100 triumph to his resume.

Thursday’s program will include time trials, heat races and the 100-lap, $5,000-to-win feature event. UMP modifieds will also be in action.