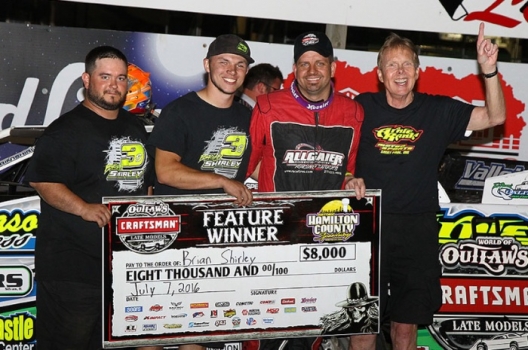 After overtaking race-long pacesetter Jimmy Mars of Menomonie, Wis., for the lead on lap 34, Shirley drove off to an $8,000 victory that gave him back-to-back WoO checkered flags for the first time in his career as the national tour began its annual Wild West Tour.

“We’ve been getting better,” said Shirley, whose third WoO triumph of 2016 and the fourth of his career left him just four points behind Brandon Overton of Evans, Ga., for fourth place in the circuit’s standings. “We’ve just been working hard. We had a rough three weeks there back in the middle of June that kind of haunted us, but you got people like (team owner) Bob Cullen and (primary sponsor) Arnie Ranta that give you … we don’t spare any expense, and we’re just trying to do our best.”

Mars, 44, raced off the outside pole starting spot to outgun the polesitting Overton for the lead at the initial green flag and controlled the majority of the distance. He couldn’t hold off Shirley’s late charge, but he did turn back challenges from Eric Wells of Hazard, Ky., following a lap-34 restart to finish second, 1.492 seconds behind Shirley’s Longhorn Race Car.

The 27-year-old Wells was a close third-place finisher, a mere 0.160 of a second short of overtaking Mars for the runner-up spot. He made a solid advance from the ninth starting spot — rising briefly to second place past Shirley midway through the race, in fact — to record his best WoO finish of the season.

Points leader Josh Richards of Shinnston, W.Va., who started 14th but had to restart after the rear after pitting to make a tire change early in the race, rallied to finish fourth while Overton slipped to fifth in the final rundown.

Shirley, 35, was all smiles after his car came alive late in the distance and he found a way to slip past Mars using the inside groove of the half-mile oval, which hosted the WoO tour for the first time.

“We had a pretty good car,” said Shirley, who remained hot after winning the June 30 WoO event at Rockford (Ill.) Speedway. “There was a couple different options out there and Jimmy was good … everybody was good. We decided to change a couple things and it worked right, so all in all just happy that the Good Lord blessed us tonight.

“It was just one of them deals that it played into our tire program. We decided to do a little something different and it just paid off.”

Mars was simply unable to slide his MB Customs car around the inside of the track like Shirley in the race’s deciding moments.

“Congratulations to Brian,” said Mars, who was looking for his first WoO win since July 31, 2014, at Cedar Lake Speedway in New Richmond, Wis. “He drove a good race. I was kind of committed up on the top more and I wasn’t gonna go down in (turns) three and four … it was getting airborne (rough spots) pretty big time. We had a good run around the top, and then it got pretty dirty up there and my tire selection wasn’t quite good enough for the moisture down below.

“But well take it. It’s fun running with the World of Outlaws when we get the chance.”

Wells enjoyed by far his most satisfying performance of 2016, besting the fourth-place finish he registered on May 6 at Ponderosa Speedway in Junction City, Ky.

“The car was really good,” said Wells, who secured just his second top-five finish of the campaign. “That’s probably the best I’ve been this year. That was fun … thanks to Jimmy Mars and Brian, they raced me clean. We could race side-by-side. I had a blast out there.”