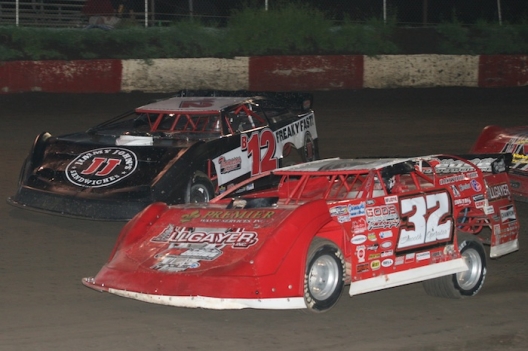 PEORIA, Ill. (July 6) — It’s often said that records are set so that they can be broken. On Wednesday night, it was Bobby Pierce of Oakwood, Ill., besting father Bob Pierce’s UMP DIRTcar Summernationals win record as he scored his 15th career tour victory at Peoria Speedway.

Starting on the pole, Pierce overtook second-starting Kevin Weaver of Gibson City, Ill., on lap nine of 40, leading the remaining distance to capture his eighth Summernationals victory of the 2016 season.

“(Kevin) Weaver and the lapped cars were kind of struggling,” Pierce said after the race. “They were everywhere. I always say it’s better to be second than first a lot of times. (Weaver) was really fast, so I was kind of worried if I would have anything for him in the beginning. But I think he went a little harder (on tires) than we did.

“It’s just so hard to pass here because you swing out to the wall. If you’ve got a run on the top, then you always have to check up for the other person. I was trying to make a bottom lane work and (Weaver) got in there and washed up a little bit and got stuck behind the lapped car and I got under there."

Successfully navigating through lapped traffic, Pierce was able to stretch his lead in the final laps.

“Peoria’s a racetrack where you’ve got to expect a lot of cars,” Pierce said. “I’m just glad we got another win. It’s really awesome. The car was great tonight.”

Working around the top side, Weaver charged to an early lead, falling to Pierce as the pair caught up with the tail of the field. The race nearing the halfway mark, a three-car battle for the second-place spot ensued between Weaver, Billy Moyer of Batesville, Ark., and Jason Feger of Bloomington, Ill., but it was the Illinois veteran pulling ahead to finish second at the checkers.

“We just got into lapped traffic there and got a little bit loose trying to pull down, trying to negotiate that traffic a little bit and he got me,” Weaver said of Pierce’s charge. “It looked like at times I was gaining on him, but I think it was just because he was in heavier lapped traffic than what I was. Like I said when I raced him the other night, he’s pretty good.”

His late-race charge around the high side coming up short, Feger notched a third place finish, with Moyer running fourth. Ryan Unzicker of El Paso, Ill., rounded out the top five.

Backing up Tuesday’s win at Daugherty with a podium finish, Feger was pleased with his run at Peoria.

“We finally got by (Moyer) there in some lapped traffic and I saw (Weaver) and we reeled him in,” Feger said. “I kind of got to his back-bumper there at the start-finish line. We had a really good car again. It just goes back to winning that heat race and starting farther toward the front. It was a fast little 40 laps around here tonight."

Polesitter Scott Schmitt charged to the lead at the drop of the green flag, distancing himself from the field in the early laps. Charles Hess began reeling in the race leader, with the top two cars holding nearly a straightaway lead over the rest of the field at the halfway mark. Schmitt won the consolation, with Hess finishing running up. Russ Adams held off a charging Jim Black to finish third and take the final transfer spot.

Working around the high side, second-starting Kevin Weaver slipped past polesitter Mike Spatola to take an early lead, distancing himself from the field as the laps clicked off. Pulling ahead of Spatola down the backstretch, Ryan Unzicker grabbed the second-place spot on the sixth lap. Weaver picked up the heat race win, with Unzicker finishing runner-up. Spatola held off Todd Bennett to run third, with Bennett finishing fourth. Bob Gardner ran fifth to transfer to the feature.

Front row starters Jason Feger and Billy Moyer raced side-by-side through the opening laps, with Moyer working the top side to pull away on the third circuit. A yellow flag flew on lap nine when Mike Mullvain and Bo Brockway collided on the backstretch. As the returned green, Moyer led the final lap to win the second heat race. Slipping from the pole position, Feger finished second, with McKay Wenger running third. Rusty Griffaw and Gordy Gundaker grabbed the final two feature transfer spots.

Polesitter Bobby Pierce jumped to the lead at the drop of the green flag, with a caution falling on the second lap for a turn-two tangle involving Jim Black and Jay Sparks. Using the restart to his advantage, Roger Rebholz challenged Pierce as the race went back green, but lost ground as the race neared the checkers. Pierce stretched his lead to pick up the heat race win, with Rebholz finishing runner-up. Timothy Culp edged ahead in a tight battle with Billy Drake to run third. Drake finished fourth, with Brian Diveley rounding out the top five.

Despite morning rains that have left the pit area and track infield a bit damp, Wednesday’s UMP DIRTcar Summernationals stop at Peoria Speedway is on as scheduled. Ryan Unzicker of El Paso, event returns to the track for the first time since capturing a Sunoco American Late Model Series victory at the Illinois oval back in May and is looking for his second Hell Tour victory of the season.

Six-time series champion Billy Moyer of Batesville, Ark., has rejoined the Summernationals field at Peoria after skipping Monday and Tuesday’s events at La Salle and Daugherty. Also on hand is currenty UMP weekly points leader McKay Wenger of Fairbury, Ill., who captured a weekly victory at Peoria on June 25.

Wednesday’s program will include time trials, three heat races, consolations and the 40-lap, $5,000-to-win main event. UMP modifieds and hornets will also be in action.