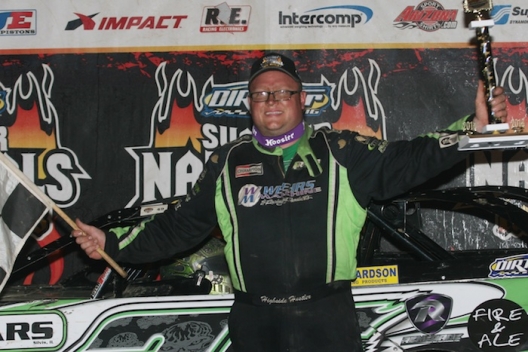 BOSWELL, Ind. (July 5) — It’s no secret that Jason Feger of Bloomington, Ill., counts Daugherty Speedway as one of his favorite racetracks. And it showed Tuesday night.

Charging to the front of the field at the drop of the green flag, second-starting Feger led all 40 laps of the evening’s UMP DIRTcar Summernationals event, earning a $5,000 payday and in first series victory of the 2016 season.

“It’s the first time I’ve been here in this Moyer Victory car and it was good all night long, ever since we unloaded,” Feger said after Tuesday’s race. "We didn’t change but very little and finally got a win.”

The former Daugherty track champion dominated the entire distance, holding as much as a straightaway lead at the race’s halfway mark. When the final yellow flag waved on lap 29, Feger had lapped up to eighth place. And he wasn’t worried about who was behind him.

“As frustrating as this tour’s been, as much bad luck as we’ve had, I didn’t really care,” Feger said. “I was just getting after it and trying to have a little fun out there and not mess up. I messed up bad last night. I just wasn’t going to let that happen again. I just kind of got the old school mentality and just was gauging on it, trying to keep it straight and having some fun."

“We’ve had some tough draws and some tough heats, but that’s no excuse,” Feger said. "I’ve got to qualify. The car’s just been a little bit on the snug side for me. We’re trying to get it freed up enough to get me qualified. It’s been really good on the big tracks, I’ve just been too tight early on the small tracks.

“We’ve got it coming around. We've probably passed more cars than anybody on this deal, but that doesn’t pay the bills. We’ve been in position to win a couple of nights and I’ve messed up and had some bad luck. It feels good to come back here and finally get a win.”

“We had a hell of a good start there,” Unzicker said. “I kind of had a gut feeling that a lot of people would push up the racetrack going into the first corner and I just tried to make sure I got it bent and turned down through the corner. I made up a bunch of ground there. The car was good. We started off really bad, my shock man and I just kept talking things over and my team just kept plugging away and made the right adjustments.”

Posting his first podium finish of the 2016 Summernationals tour, Culp said he was happy with Tuesday’s run.

“It feels great,” Culp said. “I wouldn’t have figured we would have got it on a big, fast track like this. We’ve got an older car and a small motor. But it slicked off in the feature there and we had a good car, good enough to stay up front. It kind of got top-dominant there at the end … we just kind of held our own and rode it out."

Notes: The first yellow flag flew on lap four when fourth-running Frank Heckenast Jr. slowed on the backstretch. … Second-running Tyler Erb slowed with a flat tire to draw a caution on lap 29. …  After heavily damaging his car during the night’s second heat race, Austin Smith was among early retirees from the 40-lapper.

Outside polesitter Jason Feger shot to an early lead, with a yellow flag waving on the first lap when Mike Staggs spun in turn four. Working around the high side, Feger fought back challenges from second-running Bobby Pierce through the halfway mark. A yellow flag flew on lap eight when Austin Smith hit the frontstretch wall, heavily damaging his Capital Race Car. Feger led the remaining laps to pick up the heat race win, with Pierce running second. Frank Heckenast Jr. finished third, while Ryan Unzicker ran fourth. Brian Rickey rounded out the top five.

Charging around the top, polesitter Gordy Gundaker jumped to the lead on the opening lap, as Tyler Erb and Bob Gardner battled for the runner-up spot. Gundaker led all 10 laps, with Erb pulling away from Gardner in the final circuits to finish second. Gardner ran third, with Timothy Culp edging ahead of Mike Spatola at the line to finish fourth and fifth respectively.

UMP DIRTcar Summernationals competitors travel to Daugherty Speedway in Boswell, Ind., on Tuesday following Monday night’s dramatic last-lap finish at La Salle (Ill.) Speedway that saw Bobby Pierce of Oakwood, Ill., edging Kevin Weaver of Gibson City, Ill., at the checkers. The series points leader will be on hand for the evening's $5,000-to-win event, while the veteran Weaver is not expected to make the trip.

The tour makes its second consecutive stop at Daugherty, with the Indiana oval, formerly known as Kamp Motor Speedway, returning to the series schedule last season for the first time since 2009. Jason Feger of Bloomington, Ill., a former track champion, was the winner of last year’s event.

Tuesday’s program will include time trials, heat races, consolations (if needed) and the 40-lap feature event. UMP modifieds and pure streets will also be in action.