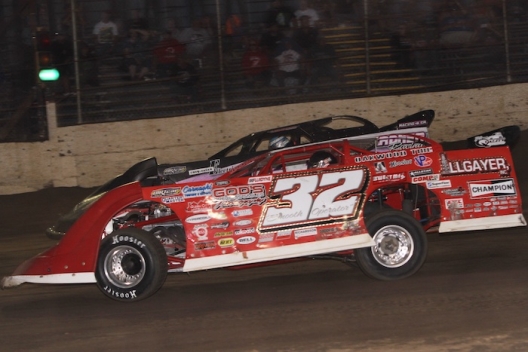 LA SALLE, Ill. (July 4) —  Monday’s UMP DIRTcar Summernationals stop at La Salle Speedway came down to the final lap, with 12th-starting Bobby Pierce of Oakwood, Ill., narrowly edging race leader Kevin Weaver of Gibson City, Ill., at the line for a $5,000 payday in his seventh tour victory of the season

Outside polesitter Frank Heckenast Jr. of Frankfort, Ill., shot to an early lead, falling to third-starting Bob Gardner of East Peoria, Ill., on the seventh lap when he jumped the cushion exiting turn two. Seventh-starting Weaver pulled ahead of Gardner one lap later, maintaining his lead over the field through the race’s halfway mark.

Running second, Pierce used a lap-36 restart to his advantage, keeping Weaver within striking distance through the remaining four laps. Battling through the final circuit, the pair exited turn four side-by-side with Pierce edging Weaver at the checkers for his 14th career Summernationals victory.

“It was awesome,” Pierce said after the race. “I think this was my first last-lap, last-corner pass to win the race. Me and Kevin (Weaver) had an awesome race. Starting 12th, I didn’t think I’d get up through there that early, but the bottom was just so good. I thought about the middle to the top, I tested it on the caution, just warming up the tires. It felt like it was kind of loose up there. About a lap and a half to go, my dad motioned me up finally. I was like, ‘Well, I’ll try it out.’ And it worked out.”

With the race coming right down to the wire, Monday’s La Salle victory is one Pierce won’t soon forget.

“It was such a close finish,” Pierce said. “Right when I moved up was when we were coming to the white flag on the backstretch. I went in (turn) three and had decent bite, just coming off I wasn’t as good as (Weaver). I got a good run off of (turn) four and dove down into (turn) one.

“I got through (turns) one and two really good, so I was like, “Well … I might have a shot at him.’ Going into (turn) three we were almost dead even. The car just turned right around the corner and still maintained a lot of traction. Between that and just hauling it in there, that’s what won us the race."

Weaver settled for a runner-up finish, with Heckenast Jr. running third. Joey Coulter of Miami Springs, Fla., held on to his fourth-place starting spot, with Gardner rounding out the top five.

“Sometimes it’s better to run second,” Weaver said of Pierce’s late-race charge. “You really ain’t got nothing to lose to give it a try. It definitely worked for him. I just slipped a little bit. He got up alongside of me there and I couldn’t swing out quite as much as I was. It was a good move on his part. I’m old, but I’m not going to let him make that move again on me.”

While the veteran Weaver is a former Summernationals champion and 17-time series winner, he said that’s the closest finish he’s been part of throughout his racing career.

“I’ve had close finishes,” Weaver said. “I’ll definitely remember this one because I run second. There’s nothing worse than getting beat right there at the line like that. But I’m happy. We come up here to run good and we did run good.”

Joining the Summernationals field at La Salle before heading into this weekend’s World of Outlaws Craftsman Late Model Series action, Heckenast was pleased with his podium finish.

“We got in the lead there early and then I jumped the cushion and three or four of them went by me all at once,” Heckenast said. “It was just kind of a battle of trying to get back to the front. That caution with four-to-go, I got that middle grove working and drove around (Joey) Coulter and was next to Pierce. He did a good move."

Outside polesitter John Gardner Jr. charged to an early lead, with third-starting Mike Spatola in tow. Timothy Culp advanced from his sixth starting spot to run third, reeling in the leaders at the halfway mark. Gardner took the checkers, with Spatola finishing runner-up. Culp finished third to transfer to the main event.

Shooting to the lead at the drop of the green flag, outside polesitter Scott Schmitt led the first half of the race. Pulling ahead in a tight battle with Ryan Unzicker for the second-place spot, third-starting Jason Feger took the lead on lap nine, but fell to Schmitt at the checkers. Feger ran second, with Unzicker finishing third. Bobby Pierce and Tyler Erb rounded out the top five.

Polesitter Bob Garder jumped to an early lead, with Austin Smith challenging the Illinois driver at the line on he third lap. Advancing from the fifth-starting spot, Shane Clanton moved in to third at the halfway mark. Gardner held off Smith to win the second heat, with Clanton fighting back challenges from Chris Simpson to run third. Simpson finished fourth, with Rich Bell running fifth to grab the final transfer spot.

Charging around the high side, second-starting Frank Heckenast Jr. pulled ahead of polesitter Joey Coulter to take an early lead. The pair crossed the line side-by-side on the fourth lap, with third-starting Kevin Weaver challenging Coulter for the second spot one lap later. A yellow flag flew on lap eight when John Piccatto and John Hartzell collided in turn three. Heckenast picked up the heat race win, with Coulter finishing second. Weaver ran third, with Taylor Scheffler and Lyle Zanker transferring to the feature.

With Saturday and Sunday’s holiday weekend events rained out, the Summernationals tour returns to action on Monday with a $5,000-to-win program at La Salle Speedway. Points leader Bobby Pierce of Oakwood, Ill., enters the event eyeing his seventh tour victory of 2016.

Pierce has had past success at La Salle, sweeping the Illinois oval’s Thaw Brawl weekend back in 2015. The second-generation driver scored a Hell Tour victory at the racetrack three seasons ago.

Chris Simpson of Oxford, Iowa, was the winner of last year’s La Salle stop. He’s expected to be on hand for Monday’s event. Jason Feger of Bloomington, Ill., heads to La Salle still looking for his first Summernationals victory of the season. He finished runner-up to Simpson a year ago.

Monday’s program will include time trials, three heat races, a consolation and the 40-lap feature. UMP modifieds will also be in action.