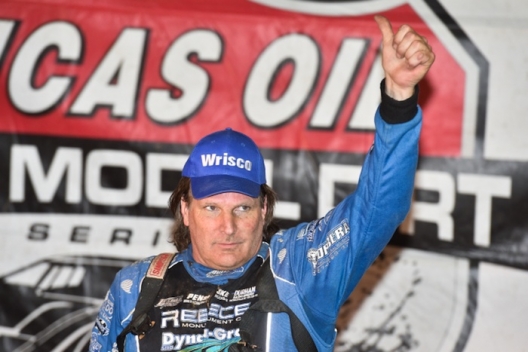 Backing up his triumph in the previous evening’s Lucas Oil Series stop at Portsmouth Raceway Park, Bloomquist wrestled the lead from Don O’Neal of Martinsville, Ind., on lap 33 and dominated the remainder of the distance at the Moran family’s 3/8-mile track. The Hall of Fame driver easily handled two caution flags during the race’s second half and beat O’Neal to the finish line by 1.882 seconds — roughly a half-straightaway margin — for his third win in the last four Lucas Oil events and seventh overall series victory of 2016.

The hot streak also extended Bloomquist’s lead in the Lucas Oil Series points standings, which he assumed control of after Portsmouth’s event. He ended the weekend with a 105-point edge over defending champion Jonathan Davenport of Blairsville, Ga., who started fifth but was never a serious factor as he slipped to the back of the top 10 before pitting for a tire change on lap 39 and finishing 13th.

“We had a good weekend,” said Bloomquist, who pocketed $24,000 in first-place cash for his pair of checkered flags, “other than we should’ve got that win on Friday night (in the unsanctioned Bob Miller Memorial at 201 Speedway in Sitka, Ky., where he led until a late scrape with eventual winner Jackie Boggs of Grayson, Ky., cut his right-rear tire).”

Jared Landers of Batesville, Ark., who started second and led laps 1-18, settled for a third-place finish. He ceded the lead to O’Neal on lap 19 and second place to his mentor Bloomquist on a lap-23 restart but held on for a podium finish that complimented his runner-up placing at Portsmouth.

Filling out the remainder of the top five was sixth-starter Earl Pearson Jr. of Jacksonville, Fla., who cracked the top five in a Lucas Oil Series A-Main for the first time since finishing second on April 16 at Batesville Motor Speedway in Locust Grove, Ark., and ninth-starter Brandon Sheppard of New Berlin, Ill.

Bloomquist got off to a slow start in the feature — he started third but slipped back to fifth on the opening lap when O’Neal and Jimmy Owens of Newport, Tenn., charged by on the backstretch — but he didn’t worry about his chances for victory.

“We just kind of put on a couple tires that were a little bit older because we were kind of questioning whether or not we needed to go a little harder or not so,” Bloomquist said. “It took a little while for them to get going, but once they did they were pretty good. I think that’s kind of why we got out-fired a little bit early, but the (Sweet-Bloomquist) car was good and the (Andy Durham-built) engine ran super.

“I wasn’t that concerned early. Everybody was really punishing their tires and I was trying not to. I just tried to get heat in them evenly. I could tell each restart we could keep up a little better, and finally there I could tell it took off good on the starts and I felt like we had it under control.”

Bloomquist carefully measured the situation after O’Neal slipped past Landers for the lead following a lap-18 restart and then made his winning moves.

“Don got by Jared there and I thought Jared was maybe gonna try to get back up by him, maybe get him into him,” Bloomquist said. “Some pretty hard racing (followed) … but everybody did a good job and the track was good tonight. You could race all over it.”

O’Neal, who turns 52 on July 10, couldn’t turn back Bloomquist’s onslaught. The 2014 Lucas Oil Series champion watched Bloomquist run up his inside on the backstretch on lap 33 to grab the lead.

Despite remaining winless in 2016 on the Lucas Oil Series, O’Neal, who won the tour’s first event at Muskingum County in 2005, was encouraged after matching his best finish of the season.

“Man, I thought we finally we’re gonna get that Peak (Antifreeze) car in victory lane,” said O’Neal, whose previous runner-up finish in ’16 Lucas Oil competition came on Feb. 10 at East Bay Raceway Park in Gibsonton, Fla. “But hat’s off to the zero (Bloomquist) … he was a little better than we was, but at least we’re making some guys. The crew’s been working their tales off. We started front row last night (at Portsmouth) and backed up to ninth, so at least we passed a few cars tonight and led for a while.

“It was fun out front for a while while it lasted,” he added. “Even when I got the lead I was just a little too free. We just gotta get a little tighter in these conditions and we might get us one here before long.”

Seven caution flags slowed the event, including five during its first half.

The cautions were triggered by a turn-two tangle involving Steve Casebolt of Indiana, Pa., Michael Davis of Rayland, Ohio, and Tyler Carpenter of Parkersburg, W.Va., on lap one; Craig Wolford of St. Louisville, Ohio, on lap 12; Doug Drown of Wooster, Ohio, on lap 17; Owens, who ran in the top five before before the turn-four wall on la 18; Mike Benedum of Salem, W.Va., on lap 23; Sonny Conley of New Martinsville, W.Va., on lap 39; and Darrell Lanigan of Union, Ky., on lap 46.

Notes: Bloomquist notched his 69th career Lucas Oil victory, which leads all drivers. He also became the first repeat winner in 11 Lucas Oil events at Muskingum County; his previous win came exactly five years earlier, on July 3, 2011. … Tim McCreadie of Watertown, N.Y., started from the pole position and challenged Landers for the lead several times in the race’s early stages, but after losing second to O’Neal on a lap-12 restart he gradually fell from contention, finishing 11th. … Casebolt took advantage of an early rainout of Sunday night’s World of Outlaws Craftsman Late Model Series event at Lincoln (Ill.) Speedway to race at Muskingum County, where he won a Lucas Oil feature in 2007. He set a new track record of 14.629 seconds in qualifying, but a blown right-rear tire in his heat forced him to charge from the rear of the B-Main to make the 60-lapper. He salvaged his night by advancing from the 18th starting spot to finish seventh. … Devin Moran of Dresden, Ohio, a Lucas Oil winner at his family’s track in 2013, had just reached sixth place from the 11th starting spot when an overheating engine forced him to retire at the feature’s halfway mark. … Owens, who won the last Lucas Oil event at Muskingum County in 2014, pulled out of the race shortly after his run went awry on lap 18.