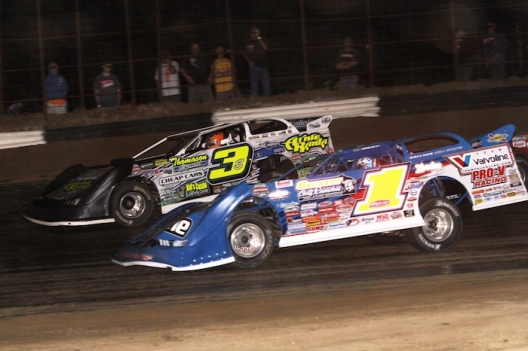 BROWNSTOWN, Ill. (July 1) — Edging ahead in a side-by-side, lead-swapping battle with Brian Shirley of Chatham, Ill., third-starting Josh Richards of Shinnston, W.Va., regained the point for good on lap 38 of 50 circuits and paced the remaining distance for a $10,000 UMP DIRTcar Summernationals victory Friday night at Fayette County Speedway.

Polesitter Tyler Erb of New Waverly, Texas, jumped to the lead at the drop of the green flag but slipped backward on the fourth lap as Shirley edged ahead at the line and Richards grabbed second. With Shirley charging around the top and Richards working the low side, the pair of World of Outlaws Craftsman Late Model Series regulars raced side-by-side until Richards shot to the front of the field on lap 11.

But the race was far from over. With a lapped car slowing Richards, Shirley was able to retake the lead just three laps later. The battle continuing, Richards regained the point on lap 33 and then Shirley pulled ahead again on lap 35.

Finally, on lap 38, Richards worked his way back to the front and stretched his lead in the final laps for his first career UMP DIRTcar Summernationals victory.

“It feels really good,” Richards said of his victory. “These guys are extremely tough in this area and we’re kind of outsiders coming in. We weren’t even going to race today. I was at Rockford (Ill.) at 11:30 (a.m.) and got up and planned on getting the car cleaned up and ready for tomorrow and Sunday (co-sanctioned WoO-Summernationals events at Federated Auto Parts Raceway at I-55 in Pevely, Mo., and Illinois's Lincoln Speedway), but the weather looks bad so we decided just to drive on down and do some racing.

“It was fun to go out there and race side-by-side with (Shirley). I was under him one lap and we got into lapped traffic and I pinched down and he didn’t know I was there and I turned down to get out of the way and I hit the yuke tire hard with the left front. It forced me to be right on my timing to get to the bottom. If I had been right out in the middle of the racetrack, it would just drag the ground and push up the track. It kind of forced me to the bottom and to focus on hitting my marks, and it actually made me a little better I think."

Shirley, a former Summernationals champion, settled for the runner-up spot.

Fifth-starting Frank Heckenast Jr. of Frankfort, Ill., outdueled last year’s Fayette County Hell Tour winner, Billy Moyer of Batesville, Ark., to notch a podium finish, giving invading WoO regulars a sweep of the top-three spots in the final rundown. Moyer finished fourth with the 19-year-old Erb falling back to round out the top five one day after recording a career-best WoO finish of second at Rockford (Ill.) Speedway.

Notes: Richards became the seventh different winner in the past seven Hell Tour events at Fayette County. ... Shirley was the winner of Thursday's World of Outlaws stop at the dirt-covered Rockford Speedway. ...  The race's lone yellow flag flew on the second lap when second-running Shannon Babb got sideways coming out of turn two, collecting Rodney Melvin, Bobby Pierce, Billy Moyer Jr. and Tanner English. ... Summernationals points leader Bobby Pierce had an off night, finishing 14th. ... With the World of Outlaws co-sanctioning Saturday and Sunday's Summernationals events, eight WoO regulars were on hand for Friday's event.

Polesitter Rusty Griffaw jumped to an early lead, with Adam Tischhauser spinning in turn four to draw a caution on the second lap. Using the restart to his advantage, Tim Manville charged around the high side to lead the third lap. A yellow flag flew on lap four for a turn-one tangle involving Tischhauser and Daniel Jacober. Daniel Hopper got in to the turn-three wall to draw a caution on lap five. Holding off challenges from Jason Feger, Manville won the B-main, with Feger finishing runner-up to transfer to the feature.

Outside polesitter Shannon Babb took an early lead, going three-wide with Shane Clanton and Ryan Unzicker on the second lap. Babb began stretching his lead at the halfway mark, as a three-car battle insued for the second-place spot. Babb picked up the win, with Unicker finishing runner-up. Chase Junghans ran third, with polesitter Clanton slipping to run fourth and transfer to the feature.

After an early battle with Bobby Pierce, polesitter Brian Shirley pulled ahead in the opening laps. Charging around the highside, Pierce began closing on Shirley mid-race, with Billy Moyer catching the leaders to make a three-car battle for the lead. Shirley picked up the heat race win, with Moyer edging ahead to run second. Pierce finished third, with Tanner English running fourth to transfer to the feature.

Polesitter Josh Richards charged to the lead at the drop of the green flag, with third-starting Timothy Culp shooting past Frank Heckenast Jr. to take the second-place spot. A yellow flag waved on the second lap for a turn-two tangle involving Austin Smith, Austin Rettig and Jim Black. Black drew a caution on lap seven when his hood flew up, blocking his vision and forcing him to slow on the racetrack. Richards led the entire distance, with Heckenast slipping back by Culp to run second. Steve Casebolt edged ahead Culp in the final laps to finish third, with the Arkansas driver settling for the fourth-place spot to transfer to the feature.

With Thursday’s Summernationals stop at Springfield (Mo.) Raceway rained out, the Hell Tour moves to Fayette County Speedway on Friday for a $10,000-to-win program. The Brownstown, Ill., oval has seen a different series winner every year since 2010, with Hall of Famer Billy Moyer of Batesville, Ark., capturing the 2015 event.

As the World of Outlaws Craftsman Late Model Series is set to co-sanction Saturday and Sunday’s tour events at I-55 and Lincoln, several WoO competitors have joined the field at Fayette County, including Josh Richards of Shinnston, W.Va., Steve Casebolt of Richmond, Ind., Billy Moyer Jr. of Batesville, Ark., Shane Clanton of Zebulon, Ga., Chase Junghans of Manhattan, Kan., and Brandon Overton of Appling, Ga.