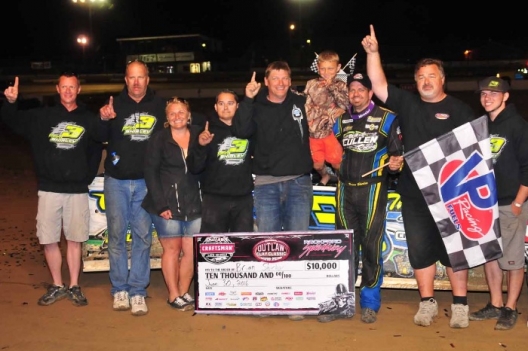 The polesitter jumped into the lead at the outset at the asphalt facility and led all 30 laps for a $10,000 victory on the World of Outlaws Craftsman Late Model Series.

“We’ll take it for what it is,” said Shirley, who battled rugged racing conditions on a rain-soaked temporary surface along with 23 other starters. “It’s hard to put dirt on top of asphalt, but it’s just a good day for my team and all the fans that were here. At the end of the day somebody has to win, and we’ll take it.”

Tyler Erb of New Waverly, Texas, scored a career-best second-place WoO finish while reigning series champion Shane Clanton of Zebulon, Ga., was third. Joey Coulter of Miami Beach, Fla., and Chub Frank of Bear Lake, Pa., rounded out the top five in a race where attrition was a factor and some drivers, including series points leader Josh Richards of Shinnston, W.Va., elected to retire early.

Following a lengthy delay for rain that halted action midway through a consolation race, Shirley motored away at the outset of the feature with Coulter, who started outside the front row, slipping back a few spots early.

Shirley repeated his quick getaway after each of four cautions in a 50-lapper cut back to 30 laps, comfortably extending his lead each time. He led by as much as 3.276 seconds before a lap-13 slowdown.

“Just trying to miss the ruts was the biggest part of it,” said Shirley, who frequently switched his lines to evade the more troublesome spots. "We got 10,000 reasons but ruts ain’t one of them.”

While Shirley built his lead, Clanton held the second spot most of the way while the race’s third caution in the race opened up the door for Billy Moyer Jr. to make the charge for third. He and Coulter went bumper-to-bumper, fighting for the final podium position until Moyer’s car faded to a stop on the backstretch, drawing a caution flag on lap 16.

Erb, whose bounding car sometimes seemingly came off the ground altogether, then took up the chase of Clanton. The young driver made the most of a final restart on lap 24 to overtake Clanton for a much-needed runner-up finish.

“(The track preparation crew) did the best they could, and that’s all we can ask for,” Erb said. “I was just trying to do all that I could do with the track we had. We just appreciate everyone coming out and supporting us. … It can only make you better. I think that kind of showed tonight.”

The Erb-Clanton battle was decided when a Clanton’s car caught a rut that sent him skittering to the top of the track in turn four.

“We did what we could, and I wish we could have come home with second,” Clanton said. “I screwed up the last five laps."

Four caution flags slowed the feature. The first flew on lap seven for debris on the racing surface; Reno Markham of Kingston, Ill., slowed to draw a caution on lap 13; a yellow flag waved on lap 16 as Billy Moyer Jr. of Batesville, Ark., slowed on the backstretch while running in the top five; and Jason Rauen of Farley, Iowa, ripped the nosepiece off his car when he tagged a tractor tire on the bottom of turn two to draw a caution on lap 24.

Notes: With the already rough condition of Rockford’s temporary dirt surface exacerbated by the rain that hit during the second B-Main and delayed the program for over two hours, WoO officials not only cut the feature length from 50 to 30 laps but also announced that the event would offer WoO show-up points to all entrants. … Shirley scored his second tour victory of the season and the third of his career. His previous triumphs came in 2007 — also in his home state, at Lincoln Speedway — and earlier this year when he inherited an April 30 win at Fayetteville (N.C.) Motor Speedway after apparent winner Willie Milliken of Roanoke Rapids, N.C., was disqualified two weeks later because a tire he used that evening failed a laboratory test. … Josh Richards was forced to the pits during his heat race after bending a j-bar and then breaking a driveshaft. He used a provisional to start the A-Main but decided to save his equipment and retired from the race after completing just a single lap. … Billy Moyer Jr.’s early departure from the feature resulted from a broken bell-housing on the rearend of his car’s Tiger rearend. The WoO rookie points leader, who felt he had a “top-three car,” said he was installing his Frankland rear for his planned visit to Fayette County Speedway in Brownstown, Ill., for Friday night’s UMP DIRTcar Summernationals event. … Tyler Erb and former NASCAR Camping World Truck Series winner Joey Coulter registered the first WoO top-five finishes of their careers. … WoO regular Morgan Bagley of Tyler, Texas, who pulled out of the race after seven laps, was in action one day after his wife, Melissa, gave birth to the couple’s second child, daughter Maddox Reid. Bagley flew in on Thursday to join his crewmen, Jay Bohannon and Tyler Kistner, at Rockford.

The World of Outlaws Craftsman Late Model Series makes its debut at the dirt-covered Rockford Speedway for the inaugural Outlaw Clay Classic. The 50-lap feature will pay $10,000 to the winner.

While Thursday’s event marks the tour’s first-ever stop at the Illinois oval, Outlaws competitors have visited dirt-covered asphalt tracks in past seasons, including Berlin Raceway in Marne, Mich. WoO competitors Josh Richards of Shinnston, W.Va., and Brandon Overton of Appling, Ga., enter the event with recent victories at Lernerville Speedway in Sarver, Pa.

Thursday’s program will include time trials, heat races, consolations and the 50-lap main event. The Outlaws tour moves to Federated Raceway at I-55 in Pevely, Mo., on Saturday for a co-sanctioned event with the UMP DIRTcar Summernationals series.