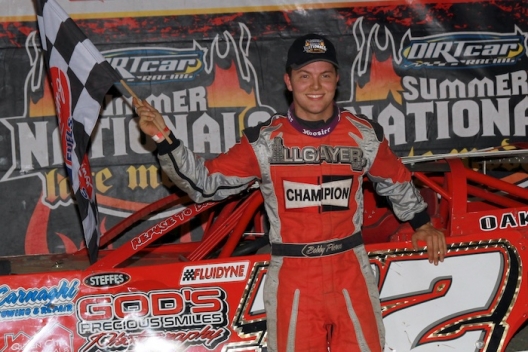 Pouncing when Jason Feger of Bloomington, Ill., bobbled out of turn two on the 35th lap, Pierce dove under Feger and into the lead in turn three, controlling the rest of the 40-lapper for his series-leading sixth victory of 2016 and a $5,000 payday.

Pierce won on the series for the third straight year at the tiny fifth-mile oval ringed by stacked railroad ties and lengthened his points lead in pursuit of a second straight Summernationals title.

Feger finished 1.475 seconds back in second while Ryan Unzicker of El Paso, Ill., who slipped past Feger in traffic to lead laps 11 and 12, was third. Polesitter Rusty Griffaw of Festus, Mo., notched his first top-five in a Summernationals race and Shannon Babb of Moweaqua, Ill., rounded out the top five.

Pierce recognized the turn-two exit was tricky with a berm on the backstretch call, and when Feger made what Pierce described as a "tiny bobble," he was able to get past.

“I was just kind of being patient, waiting for him to hopefully to do that," Pierce said, "and right when he did that, at the same time I had a heckuva run, and I just decided to take it right there, and luckily it paid off.”

When Feger lost the lead, he vainly chased Pierce the rest of the way.

“I just bobbled a little bit on the cushion, which, this place, the way it is, it’s kind of hard to be real consistent up there,” Feger said. “He made and aggressive move and got through there, and just kind of made me hit the brakes, and there wasn’t really anything I could do (to try and) get my momentum to slide him back."

Feger took command early from outside the front row with Unzicker dropped Griffaw to third on the second lap. Into lapped traffic nearly immediately, Feger and Unzicker found themselves amid a swarm of slower cars with Feger running the higher groove and Unzicker running around the infield wall.

Unzicker went ahead just before a caution, but he led just one more lap before Feger’s high-side momentum carried him back ahead while Pierce worked on Griffaw a little further back.

At halfway, Feger had a 1.5-second margin as Unzicker gave up on the low groove and chased him up high while Pierce was up to third.

Feger edged away to nearly a two-second lead a few laps later as Unzicker and Pierce had a groove-swapping battle whiel trying to overtake Mike Schulte’s slower car. Once they cleared him, they caught Feger again, and the leader split lapped cars on lap 28 and then again on lap 30 to get a little breathing room as Pierce finally won the duel for second with Unzicker.

While a yellow flag with 11 laps remaining gave Feger clear racetrack, it also gave Pierce a clean shot at the leader, and he took advantage when Feger’s car briefly checked up at the top of the backstretch, allowing Pierce to make the winning move.

Pierce's victory helped him rebound from a wreck at Clarksville Speedway — which also eliminated Feger — that left him with an 18th-place finish, his worst on the tour by 10 spots.

The feature was slowed by four cautions, the first for a called-back start.

Another yellow appeared on lap 11 when Matt Taylor stopped against the wall at the turn-one entrance and another on lap 30 when Michael Kloos rolled to a stop on the frontstretch.

The last caution appeared for ninth-running Chad Zobrist, who started heading into turn one on lap 36.

The series heads to Springfield (Mo.) Raceway on Thursday for another $5,000-to-win event, the first trip to the quarter-mile oval and the third night of 13 consecutive days of action on the grueling tour.

The modified feature should roll by 10:20 p.m. with the Late Models to follow. ... Looking for his first series victory of 2016, Jason Feger of Bloomington, Ill., got the preferred outside front-row starting spot for the 40-lap feature. The other heat winners picked the other three spots, giving him the position by default. “I probably couldn’t have drew the two,” Feger said, "so I’m glad they left it for me.” … Larry Greer’s Longhorn Chassis kept him safe, but it’s probably junk after his barrel-rolling accident on the backstretch in the heat race. He said he briefly lost consciousness but other than a sore right shoulder and banging the knuckle on his right index finger, he’s no worse for the wear after being checked out by emergency responders. “They said I had good blood pressure,” he cracked. Greer called his wife back in Bowling Green, Ky., to let him know he was OK, certain she’d get wind of it through social media. … Kyle Beard of Trumann, Ark., made his first appearance at Belle-Clair and found the track just a little smaller than Crowley’s Ridge Raceway in Paragould, Ark., a track he’s run regularly. Crowley’s Ridge, however, Beard pointed out, doesn’t have an inside wall like Belle-Clair. A crew member giving him signals while Beard was hugging the inside groove in heat action actually jumped back when he realized how close he was to Beard’s car. … Bob Gardner had a lap under track-record time in hot laps (that doesn’t count officially), but he had to resort to a provisional to make the feature. Brent Larson got the other series provisional while Corey Ford got the track provisional and Michael Kloos the provisional based on last season’s UMP weekly points.

Polesitter Greg Kimmons held off the high-side charge of Myles Moos by eight-hundredths of a second and both transferred to the main event. Michael Kloos finished third after following Kimmons in the low groove. Three cautions slowed the action, first when Jim Moon, plagued by transmission and ignition problems, pulled up lame on the second lap. A turn-four pileup slowed the action on the third lap and Richard Frost spun for a lap-four yellow.

Jason Feger led all the way from the pole, holding off a late charge by Rodney Melvin for a 10-lap victory that ran caution-free. Gordy Gundaker was further back in third with Mike Schulte getting the final transfer spot.

Pulling away in the high groove, Rusty Griffaw won the third heat over Shannon Babb and Kyle Beard, who took turns trying to get under him in the low groove. Babb tried first, then abandoned the bottom for the top while Beard moved past and held the second spots on lap three through five. But Babb edged back ahead of Beard and tried his hand at the low groove, and Griffaw pulled away. Timothy Culp for the final transfer spot in the caution-free heat.

In a lengthy heat delayed by a red flag and long yellow, polesitter Ryan Unzicker led from the outset and cruised to a 10-lap victory over Matt Taylor, who barely held off Daryn Klein to get second. Mike Hammerle got the fourth transfer spot when he abruptly closed the door on a high-running Michael Kloos just before the checkers. Hammerle inherited the fourth spot after a lap-six collision between Michael Kloos and Bob Gardner inside the turn-four exit. It took several minutes to pry the Kloos and Gardner cars apart. The heat was also marred by Larry Greer's rollover accident on the fourth lap. A red flag appeared when the tail-running Greer's car barrel-rolled down the backstretch with his car ending up on its lid; he was briefly knocked unconscious, but after a few moments the Bowling Green, Ky., driver was able to climb out.

Chad Zobrist narrowly got the jump on Bobby Pierce from outside the front row and kept him in check all 10 laps for a victory. Pierce tried low and high to find a way around, finishing 0.353 seconds behind at the checkers. After a brief slipup off turn two, Rick Salter regained third from Adam Tischhauser at mid-race and held onto the pit with Tischhauser getting the final transfer spot. Jim Moon stalled to draw a first-lap caution.

Series points leader Bobby Pierce of Oakwood, Ill., winner of the previous two series events at Belle-Clair Speedway, topped 35 qualifiers in Wednesday’s event with a lap of 11.479 seconds on the fifth-mile oval.

Heat race lineups start straight up with the top four drivers transferring from the 10-lap heats.

Series points leader and defending tour champ Bobby Pierce of Oakwood, Ill., heads to the 11th round of the UMP DIRTcar Summernationals looking for his third consecutive series victory at the railroad tie-ringed fifth-mile oval that’s hosting the grueling tour for the ninth time.

Coming off his worst run of the tour — Pierce dropped out of Tuesday’s race at Clarksville (Tenn.) Speedway after a frontstretch wreck — he still holds a commanding lead on fellow tour regulars Jason Feger of Bloomington, Ill., and Ryan Unzicker of El Paso, Ill., the winner at Clarksville who has three top-five finishes in his last four starts.

Pierce and three-time series champion Dennis Erb Jr. of Carpentersville, Ill., are the only two-time series winners at Belle-Clair. Single-race winners are Feger, Unzicker, Brandon Sheppard and Will Vaught, who won the tour’s first visit to Belle-Clair in 2008.

The field will be split into two groups for qualifying with four heats, two consolation races and the 40-lap feature.