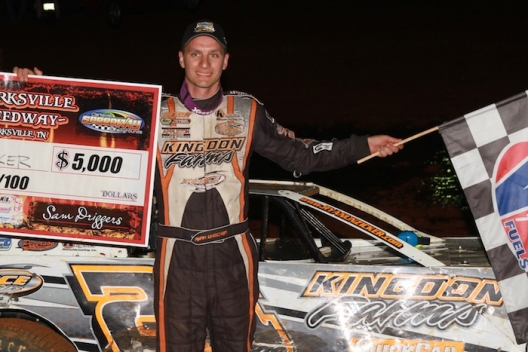 The polesitting Unzicker kept the son-and-father duo of Tanner and Terry English in check while racing to his eighth career series victory, his third top-five run in four starts after barely contending his first five races and missing another event with hauler problems.

“I’m just a real good (low-groove) racer and I’ve been coming down here for many years for the Toilet Bowl and the Summernationals, and I’ve just got my own little setup here,” the 34-year-old Unzicker said. “It played in my favor a little bit with the rain (staying) on the bottom, but our car’s been running good here for four or five nights in a row, the Bob Pierce chassis has been rolling, and a good points night for us.

Unzicker’s first 2016 series victory came on a night when series points leader Bobby Pierce of Oakwood, Ill., ran into his most serious trouble on a series he’s been dominating with five victories in the first nine events.

Pierce started alongside Unzicker started outside the front row, but he faded to sixth early, tangled with a lapped car and collected Jason Feger on the frontstretch to draw a lap-nine caution. Pierce's crew tried to fix significant left-front nose damage, but when he returned to the track, he wasn’t able to get up to speed and ended up retiring a few laps later with an 18th-place finish, 10 positions worse than his previous worst finish.

Unzicker, whose previous series victory came July 5, 2013, at Fayette County Speedway in Brownstown, Ill., finished 1.625 seconds ahead of fourth-starting Tanner English of Benton, Ky., who ran just ahead of his father Terry throughout the race. Bob Gardner of East Peoria, Ill., was fourth and Gordy Gundaker of St. Charles, Mo., improved three positions for his first career top-five finish on the series.

The younger English had a softer right-rear tire than Unzicker, whose harder compound performed better during the longer stretches between cautions.

“I feel like maybe (Unzicker’s tire), in the long run was better,” English said. “I got the track position with that (softer tire) on and I felt like that helped me out a lot when I stayed up there with him for a while. But I could feel that (tire) fading. I don’t know if I had something for him. He’s pretty good.”

Unzicker got the jump on Pierce at the outset, edging away while Tanner English stole second from Pierce exiting turn four on the third lap.

Pierce’s slide continued back to fifth a lap later, and he was part of the second caution on lap nine in a frontstretch skirmish with a lapped car that left Feger with nowhere to go. Feger’s car ended up sitting perpendicular to onrushing frontstretch traffic, but while everyone avoided him, his race was over.

Unzicker motored away on that and ensuing restarts to control the rest of the race. The tensest moment for the winner came on the eighth lap when his car was clipped by the lapped car of Jeffrey Bailey and briefly knocked his car askew entering turn one. Unzicker recovered without apparent issue while Bailey pulled to the infield.

Besides the Pierce-Feger tangle on lap nine, three other yellows appeared. Timothy Culp pulled up lame in turn two on the second lap, a lap-12 yellow appeared for Pierce’s departure and Mark Voigt slowed for a lap-31 caution.

The series continues Wednesday at Belle-Clair Speedway in Belleville, Ill., for a $5,000-to-win, the 11th event on the tour and the second of a 13-days-in-a-row stretch for series competitors.

Polesitter Ryan Unzicker slid up in front of Brent Larson exiting turn two on the first lap and pulled away for a victory. Larson slipped back to third behind Clarksville points leader Caleb Ashby, who scored a runner-up finish in the caution-free prelim. Larry Greer was fourth and all drivers transferred to the main.

Terry English outdueled fellow front-row starter Bob Gardner on the first lap, then kept him in check the rest of the way for a victory in the second heat. Gardner nearly got sideways in turn four heading for the white flag, ending any hopes while Jason Feger finished third and Wendell Wallace fourth. A lap-three caution appeared when Jeffrey Bailey slowed with right-front damage after the seventh-starting Wallace's daring frontstretch move caused a turn-one scramble that left Bailey the odd man out.

Series points leader Bobby Pierce got the jump from outside the front row and fought off a challenge from polesitter Tanner English on a restart to grab a 10-lap victory. English nearly pulled alongside on the backstretch of a lap-three restart, but Pierce reasserted himself up front. Gordy Gundaker ran a solid third while Richard Frost edged Kyle Beard for fourth. Ross Camponovo, who was late to the starting grid, drew a lap-three caution and retired.

Tanner English of Benton, Ky., topped 23 qualifiers at Clarksville Speedway to earn a pole starting spot in one of three heat races. English tripped the clock at 12.514 seconds at the red-clay quarter-mile oval.

Other heat-race polesitters are Bob Gardner of East Peoria, Ill. (12.591) and Ryan Unzicker of El Paso, Ill. (13.096). Series points leader Bobby Pierce was second quick in the first group and will start outside English in the first heat.

A half-hour of heavy mid-afternoon rain that stopped about 3:30 p.m. moved through left the racing surface soggy and lots of standing water in the infield. Pack trucks are trying to whip it into shape, but the schedule was running at least a half-hour behind. … With 23 entries, there'll no consolations in Late Models or any other division. ... Among series newcomers at Clarksville is Ross Camponovo of Clarksdale, Miss., who will make his Clarksville debut and just his third start of 2016. He’s off on a Midwestern racing that’ll take him to the dirt-on-asphalt show at Rockford (Ill.) Speedway on Thursday and likely other World of Outlaws Craftsman Late Model Series events; his girlfriend’s family lives in Isanti, Minn., and he’ll be visiting there, as well. … Another series newcomer, Kyle Beard of Trumann, Ark., tentatively plans to run two more series races this week in Belleville, Ill., and Springfield, Mo., a track where he has multiple victories. ... Former Clarksville Summerantionals winner Wendell Wallace of Batesville, Ark., is slated to pilot the No. 33 car owned by Steve Lampley of Benton, Ill.; Wallace has driven the car several times in recent seasons. Lampley said he considered putting Brandon Sheppard behind the wheel, but with his appeal for a UMP DIRTcar suspension up in the air, he went with Wallace. … Clarksville hasn’t had a repeat winner since 2008 (Dennis Erb Jr. won then and in 2012) … Clarksville’s events were rained out (and later made up) in 1999 and 2008. … Levi Kissinger of Mount Vernon, Ill., won last year’s event, but he’s not competing in Late Models in 2016. … Three Arkansas drivers have won Summernationals events at Clarksville: Wallace, Jack Sullivan and Donnie Barnhart. … The series is in the second race of a four-race stretch of competing in different states (Indiana, Tennessee, Illinois and Missouri). ... Former Clarksville champions Chuck Proctor and Tony Albright are among former drivers on hand.

The UMP DIRTcar Summernationals begins its longest streak of day-after-day racing (13 in a row) Tuesday with a $5,000-to-win event at Clarksville Speedway. The quarter-mile oval promoted by William Scogin pays $5,000-to-win for a 40-lap feature.

Series points leader Bobby Pierce of Oakwood, Ill., a five-time winner in nine series races, leads the tour to Clarksville, which is hosting the series for othe 19th time.

The format will be three groups of qualifying with three heats and every driver transferring to the 40-lap main event. Heat winners will redraw for position.